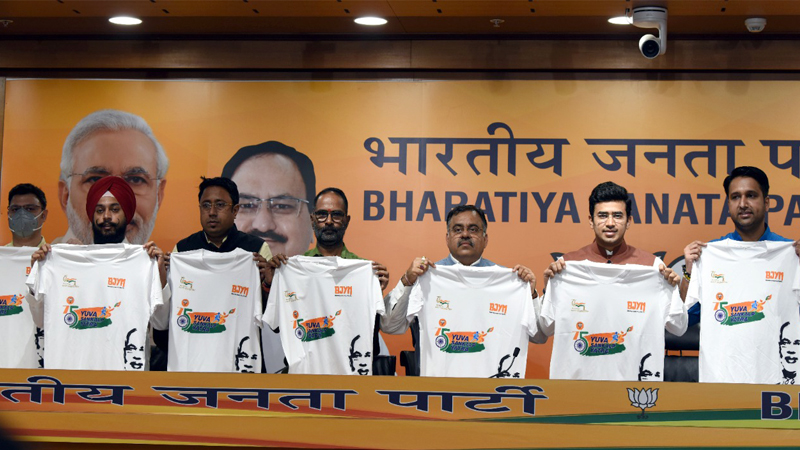 The Yuva Sankalp Yatra is part of the country’s Azadi Ka Amrit Mahotsav. The Azadi Ka  Amrit Mahotsav is a people’s Mahotsav initiated by the Hon’ble Prime Minister Shri Narendra  Modi. The Yuva Morcha will strive to ensure maximum participation from the youth by conducting  various programmes across the year. One of the first set of events being organised is the Yuva  Sankalp Yatra and Rashtragaan Samarpan programme.

The Yuva Sankalp Yatra intends to promote the message of New India and Honourable  Prime Minister Shri Narendra Modi’s vision of India for 2047 and the role of youth. The cycling  and running programmes are also intended to encourage all the young people of the country to  be fitter and stronger to create a healthy and resilient nation.

In addition to the Yuva Sankalp Yatra, the BJYM will also activate 7,50,000 cadres to sing  the national anthem together at 7.50 am on August 15 in all districts with a minimum of 75 people  at one district. It has also instructed its cadre to upload a recorded clip of the National Anthem on  the Ministry of Culture’s www.rashtragaan.in website.

“The Yuva Sankalp Yatra, planned under the guidance of the BJP National President Shri  J.P. Nadda Ji and BJP National General Secretary Shri Tarun Chugh Ji, is a special programme  of the BJYM,” Surya said in a statement. “The Yuva Morcha has invited all young people to

participate in the Yatra in their district. Young people are expected to join in large numbers in 75  different locations spread across the country to cycle during Yuva Sankalp  Yatra.”

“In all, the Yuva Sankalp Yatra will record 5,625 km of cycling or running across the  country. Going by an average of 10 running or cycling events per location, there will be 750  events at least across the country celebrating the “Azadi Ka Amrut Mahotsav”. All the participants  of the Yatra will also take an oath/pledge at every programme location to build a strong, resilient  and prosperous India that will be a leader of the world in 2047,” Surya added.