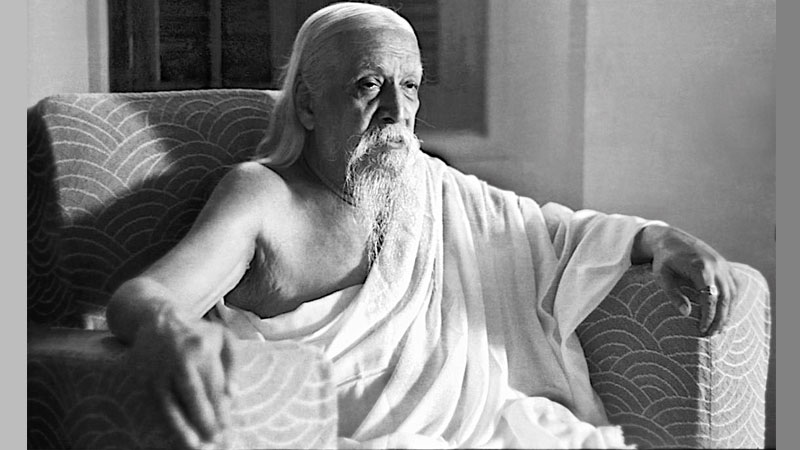 Aurobindo Ghosh was born to surgeon Krishna Dhan Ghose and Swarnalata Devi in Calcutta on August 15, 1872. Eminent writer, Raj Narayan Bose was Aurobindo’s maternal grandfather. Aurobindo Ghose was a multifaceted person. He was a freedom fighter, poet, scholar, yogi and philosopher. He spent his life working towards the cause of India’s freedom, and for further evolution of life on earth.
With his two brothers, he was given an entirely Western education by their Anglophile father. After infant schooling at a convent in Darjeeling, they were taken to England to live with a clergyman’s family in Manchester. From there they joined St. Paul’s public school in West London, and later went on to Cambridge University.

Sri Aurobindo was a brilliant scholar, winning record marks in the Classical Tripos examination. But he had already been touched by a will for the Independence of India, and did not wish to become an official of the colonial administration. He managed to disqualify himself by failing to take the mandatory riding test and instead returned to India in 1893 in the service of the Indian princely State of Baroda, where he remained up to 1906.

In that year he returned to his birthplace, Calcutta, as the first Principal of the new Bengal National College. He resigned that post because of his increasingly active involvement in the Nationalist Movement. He edited the English daily ‘Bande Mataram’ and wrote fearless and pointed editorials. He openly advocated the boycott of British goods, British courts and everything British. He asked the people to prepare themselves for passive resistance.

Sri Aurobindo was the first of the Nationalist leaders to insist on full independence for India as the goal of the movement, and for several years he lent all his considerable abilities and energies to this struggle. The famous Alipore Bomb Case proved to be a turning point in Sri Aurobindo Ghosh’s life. This led to him being arrested on a charge of treason and being kept in solitary confinement for almost a year as an ‘under trial’ prisoner in Alipore jail. During this time he had a number of fundamental spiritual experiences which convinced him of the truth of the “Sanatana Dharma” – the ancient spiritual knowledge and practice of India.

After he was acquitted and released, this spiritual awareness led him to take refuge from continuing pursuit by the British authorities in Pondicherry, then part of French India, where he devoted himself intensively to the exploration of the new possibilities it opened up to him. He reached Pondicherry in 1910 and soon started getting followers and devotees who settled down at the place where Aurobindo lived and eventually a spiritual Ashram came up. Supported by his spiritual collaborator, the Mother and using his new-found spiritual capacities, he continued to work tirelessly for the upliftment of India and the world.

Apart from ‘Life Divine’, which was his best known work, he also wrote several other works. In 1914 after four years of concentrated yoga at Pondicherry, Sri Aurobindo launched Arya, a 64 page monthly review. For the next six and a half years this became the vehicle for most of his most important writings, which appeared in serialized form. These included Essays on The Gita, The Secret of The Veda, Hymns to the Mystic Fire, The Upanishads, The Foundations of Indian Culture, War and Self-determination, The Human Cycle, The Ideal of Human Unity, and The Future Poetry.

Sri Aurobindo’s philosophy is based on facts, experience and personal realisations and on having the vision of a seer or Rishi. Aurobindo’s spirituality was inseparably united with reason. The goal of Sri Aurobindo was not merely the liberation of the individual from the chain that fetters him and realization of the self, but to work out the will of the Divine in the world, to effect a spiritual transformation and to bring down the divine nature and a divine life into the mental, vital and physical nature and life of humanity.

Sri Aurobindo left the mortal world on December 5, 1950 at Pondicherry at the age of 78.