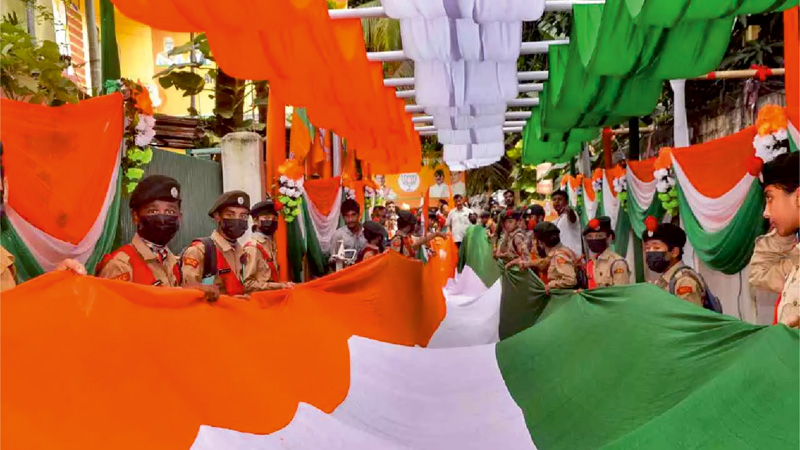 The ‘Har Ghar Tiranga’ campaign was celebrated across the country as a celebration from August 13 to 15 marking the 75th anniversary of India’s Independence. The ‘Har Ghar Tiranga’ campaign under ‘Azadi Ka Amrit Mahotsav’ has got unprecedented public response across the country and the target of having 20 crore households hoist the national flag on 76th Independence Day was successfully reached. It was a campaign initiated by the Hon’ble Prime Minister Shri Narendra Modi as a token of patriotism and loyalty toward the nation.

On the occasion, Prime Minister Shri Narendra Modi had urged the citizens to change their social media DP (Display Picture) with the National Flag and he also encouraged people to hoist the National Flag at their homes during August 13-15 to celebrate ‘Azadi Ka Amrit Mahotsav’.

‘Azadi Ka Amrit Mahotsav’ was a great initiative taken by the Modi Government, which encouraged crores of people to become a part of it. The Prime Minister updated his social media DP to Tiranga on August 02, 2022. Corers of people followed the Prime Minister proudly by changing their DP and hoisting the National Flag at their homes.

In his message PM Shri Narendra Modi said, “Overjoyed and proud of the amazing response to the #HarGharTiranga movement. We are seeing record participation from people across different walks of life. This is a great way to mark Azadi Ka Amrit Mahotsav”.

Monuments illuminated in hues of Tricolour


The ‘Har Ghar Tiranga’ campaign reached all corners of the country with MPs and other elected representatives participating to encourage people to be a part of the initiative. Over 6 crore people took selfies with the national flag at their homes during the exercise between August 13-15 and uploaded it on the official website for it. As part of the campaign monuments all across India illuminated in the hues of Tricolour.

Several new milestones like a Guinness World Record of “world’s largest human image of a waving national flag” at a cricket stadium in Chandigarh, with the participation of 5,885 people, has been created during the campaign. The event was organised by the NID Foundation and Chandigarh University to strengthen the campaign as part of ‘Azadi Ka Amrit Mahotsav’. Also, the district administration of Srinagar established a national record by displaying the 1850-meter-long National Flag at Bakshi Stadium to celebrate 75th year of Independence.

The government of India had taken various steps to ensure the supply of flags across India. Flags were available from 1st August, 2022 in the Post Offices in the country. In addition, state governments also tied up with various stakeholders for the supply and sale of flags. The Indian National Flag was also registered on the GeM portal.
With over 60,000 events successfully held across 28 states, eight Union Territories, and over 150 countries, the initiative of ‘Azadi Ka Amrit Mahotsav’ was one of the largest programmes ever organised in terms of scope and participation. The commemoration of 75 years of independence started on March 12, 2021 as a 75-week countdown to August 15, 2022 and will continue till August 15, 2023.