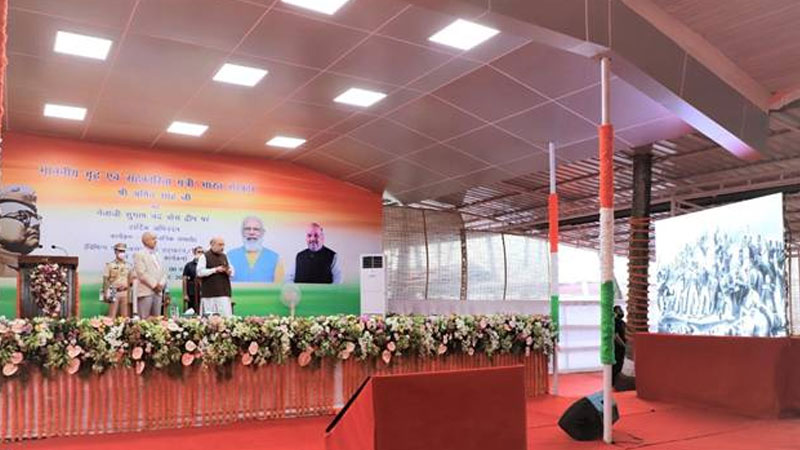 Shri Amit Shah said that the Amrit Mahotsav of Freedom is being celebrated when we are also celebrating the 125th birth anniversary of Subhash Chandra Bose. It is during this year that I have come here, where on 30th December 1943, Subhash Babu, breathing the free air of a free India, unfurled the Tricolor. He said that learning from Netaji and his life, it is felt that injustice has been done to Netaji. The bright pole star in the history of the Freedom Movement, Netaji did not receive as much importance as he should have.

Manipur was under British occupation for a long time, the Freedom Fighters of Manipur always fought the British tooth and nail in battles

The Union Home and Cooperation Minister said that similar injustice has been done to Sardar Patel. The Indian Republic today would not have been possible if Sardar Patel had not made more than 550 princely states a part of India in less than a year and a half.

Shri Shah said that Prime Minister Shri Narendra Modi had also announced that Subhash Babu’s birthday on 23 January will be celebrated as ‘Parakram Diwas’ and governments across the states and the Central Government are celebrating ‘Parakram Diwas’.


Shri Amit Shah said that today another important task is being done during the Azadi Ka Amrit Mahotsav. He said that Manipur had a significant contribution in resisting the British in the entire Northeast during the 1857 Revolution and also in 1891. Manipur never gave up and the people there continued to fight. Manipur was the only state that had implemented its own constitution. The Union Home Minister said that though Manipur was under British occupation for a long time, the Freedom Fighters of Manipur always fought the British tooth and nail in battles. Manipuri war hero Yuvraj Tikendrajit and General Thangal were publicly hanged in Fida, Imphal.

The British thought that by hanging them, they had crushed the Freedom Movement, but it did not happen. After that Maharaja Kulchandra Dhwaja Singh and 22 freedom fighters were sent to Kala Pani and they were kept here on Mount Harriet, an island. The Union Home Minister said that today in his memory, we would like to honor his contribution by naming Mount Harriet as ‘Mount Manipur’.

Shri Shah said that the Manipur government also wants to build a memorial here, this memorial will inspire tourists, the youth and the younger generation across the country on how to fight with limited resources. They still fought a battle in which defeat was certain and it was also certain that either the death penalty or the punishment of Kala Pani would be handed out.Those who died and those who survived came here and were imprisoned. Shri Amit Shah said that it is this spirit of freedom that has given us a free India and we can never forget them.

He said, the Modi government is beginning development work of about Rs 1,000 crore in a small area of Andaman Islands today. Shri Amit Shah said that the Modi government has decided to name the bridge which was inaugurated today as Azad Hind Fauj Bridge.