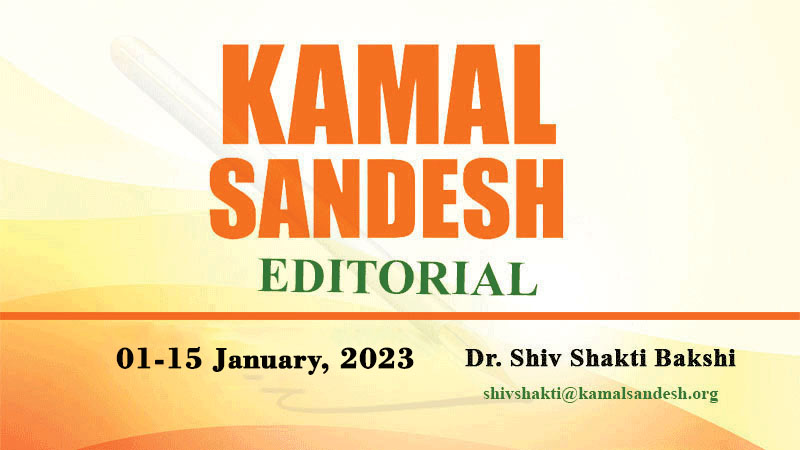 As the new BJP government takes oath in Gujarat and Shri Bhupendra Patel is sworn in as Chief Minister of the state for the second time, a new chapter in Gujarat’s history is being written with the hard work, dedication, and commitment of the BJP Karyakartas. While the BJP has been in government for the last 27 years in Gujarat and has received the blessings of the people for the seventh time in a row, the spirit of serving the people through politics of performance continues to inspire the Karyakartas across the nation. Along with the commitment to good governance and development embodied in the “Gujarat Model” of developmental politics that

emerged under the charismatic and visionary leadership of Shri Narendra Modi, the nation is witnessing a new kind of politics with a single minded devotion to serving the people. The historic mandate of the people of Gujarat has sent a message across the country that the unprincipled politics of casteism, corruption, dynasty, and opportunism can be defeated with the politics of performance, commitment, and hard work. The Congress, which has become a symbol of corruption, dynasty, policy paralysis, and divisive politics, is now continuously relegated to the background in Indian politics. While the overwhelming blessings of the people have further strengthened the commitment of the Karyakartas, the need of the hour is to exceed people’s expectations by dedicating to serving them tirelessly.

The outrageous remark of Pakistan Foreign Minister Bilawal Bhutto is not only unacceptable but highly condemnable in the civilised world. It is undoubtedly the result of the utter frustration in which Pakistan finds itself owing to its unabated faith in terrorism, deep nexus with terrorists, various terror outfits and their networks, and underworld operators. Today, Pakistan stands exposed as a sponsor, harborer, and promoter of terrorism across the world. Moreover, Pakistan has become an exporter of terrorism, causing havoc in many cities across the world while harbouring dreaded terrorists, extending all kinds of logistics, and protecting them on its soil. On the other hand, India, under the strong and determined leadership of Prime Minister Shri Narendra Modi, has become a crusader against terrorism, bringing it to the agenda of every multilateral international forum. India’s relentless campaign against terrorism has resulted in the international marginalisation of Pakistan. The uncivilised and shameful attack on the Prime Minister by Pakistan is a result of such desperation, which continues to haunt it as the epicentre of terrorism. The statements of Bilawal Bhutto should be condemned in the strongest possible terms.

While in the winter session of parliament, the Congress has tried to mislead the country by raising baseless questions on Tawang, the statement of Rahul Gandhi on armed forces is highly offensive and condemnable. It is not the first time that the Congress has tried to belittle the achievements of the armed forces and question their capabilities, but it has become a habitual offender on questions of national security. Instead of recognising the valour, strength and courage of the armed forces, the Congress has tried to break morale of the nation by attempting to undermine the achievements of the country. It is shocking to see that the Congress’ statements on the issues of national security are often similar to Pakistan’s statements and sometimes in line with China’s positions. The Congress will do well to apologise for its position on the issues of national security and desist from such criminal acts in the future.