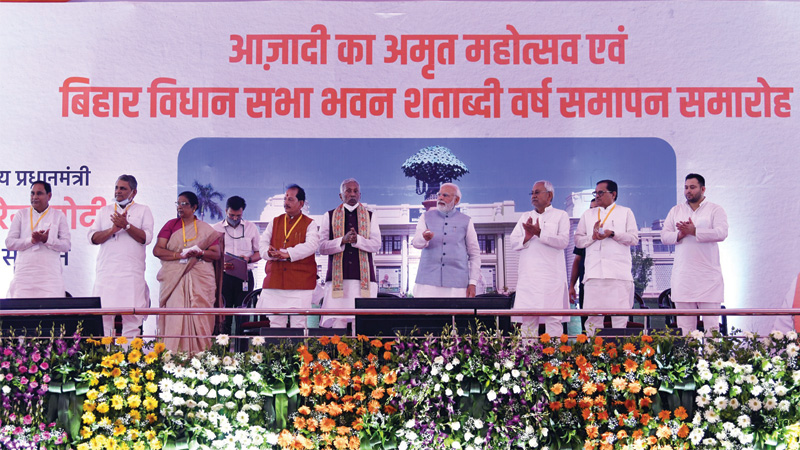 The Prime Minister, Shri Narendra Modi addressed the closing ceremony of the Centenary celebrations of the Bihar Legislative Assembly in Patna on 12 July. The Prime Minister inaugurated Shatabdi Smriti Stambh which has been built to commemorate 100 years of Bihar Vidhan Sabha. He also laid the foundation stone of the Vidhan Sabha museum. Different galleries in the museum will demonstrate the history of democracy in Bihar and the evolution of the current civic structure. It will also have a Conference Hall with more than 250 people capacity. The Prime Minister also laid the foundation stone of the Vidhan Sabha guest house on the occasion. Governor of Bihar, Shri Phagu Chauhan, and Chief Minister Shri Nitish Kumar were among those present on the occasion

Addressing the gathering, the Prime Minister said It is the nature of Bihar that the one who loves Bihar, Bihar returns that love manifold. “Today I have also got the privilege of being the first Prime Minister of the country to visit the Bihar Vidhan Sabha Complex. I bow to the people of Bihar for this affection”, he said. The Prime Minister said that the Shatabdi Smriti Stambh will inspire myriad aspirations of Bihar.

Recalling the glorious history of the Bihar Assembly, the Prime Minister said big and bold decisions have been taken in the Vidhan Sabha building here one after the other. Before independence, Governor Satyendra Prasanna Sinha had appealed from this assembly to encourage indigenous industries and the adoption of Swadeshi Charkha. After independence, the Zamindari Abolition Act was passed in this assembly. Taking this tradition forward, Nitish ji’s government passed an act like Bihar Panchayati Raj making Bihar the first state where women were given 50 per cent reservation in Panchayats, he recalled. “This Assembly is an example of how equal participation and equal rights are pursued in democracy to social life”, the Prime Minister remarked.

The Prime Minister reiterated that mother of democracy in the world is India. India is the mother of Democracy. And the glorious heritage of Bihar and the historical documents present in Pali are living proof of this. No one can erase or hide this splendour of Bihar, he insisted. “This building has strengthened Indian democracy for the last hundred years, hence it deserves our homage. This building is associated with that consciousness which did not allow dissipation of democratic value even during the period of slavery”, he added.

Marking the 21st century as the century of India the Prime Minister said “for India, this century is the century of duties. We have to reach the golden goal of New India in this century, in the next 25 years. Our duties will take us to these goals. Therefore, these 25 years are the years of walking on the path of duty for the country.” Shri Modi elaborated “we should not consider our duties as separate from our rights. The more we work for our duties, the stronger our rights will get. Our loyalty to duty is the guarantee of our rights.”