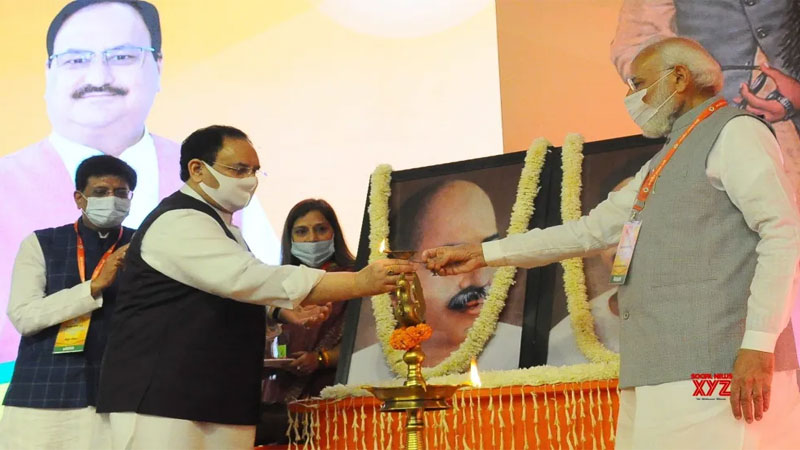 Keeping in mind the Covid-19 protocols, all National Executive members were not called to Delhi to attend the meeting. A total of 124 senior Bharatiya Janata Party leaders were present at the NDMC convention center who attended the meeting while all the Chief Ministers and Deputy Chief Ministers of the BJP ruled states, all the BJP state unit presidents and other senior leaders from the states virtually attended the meeting from their respective state headquarters.

Various issues were discussed in the meeting which include a special brainstorming session on the forthcoming assembly elections in five States. A condolence resolution was also adopted in the memory of all those who lost their lives in the Corona pandemic. The National Executive also discussed programmes and policies to make the Bharatiya Janata Party more broad-based in order to incorporate greater sections of the society.

At the National Executive meeting venue, an exhibition was also organised where a glimpse of all policies and programmes of the Bharatiya Janata Party led by Prime Minister Shri Narendra Modi was presented. These include programmes to make India self-reliant with programmes like the ‘Atmanirbhar Bharat Abhiyan’ and ‘Gareeb Kalyan Anna Yojna’. The exhibition also showcased how the poor and needy people of India got free rations for two years during the Corona pandemic; how women, farmers, senior citizens, widows and especially abled people got money directly into their bank accounts.

The exhibition also showcased how the Bharatiya Janata Party karyakartas, under the guidance of Prime Minister Shri Narendra Modi and under the leadership of the party President Shri Jagat Prakash Nadda served humanity during the tough times of the Corona pandemic, provided relief and succor to crores of poor and needy people across the country. The Bharatiya Janata Party karyakartas did not care for themselves and devoted themselves towards the service of humankind. All these were highlighted in the exhibition besides the ‘Sewa Hi Sangathan’ and ‘Sewa Hi Samarpan’ programmes which were instrumental in BJP reaching every corner and remotest part of the country. Recently India achieved the target of 100 crore Corona vaccinations thus accomplishing world’s largest and fastest vaccination drive; which was also part of the exhibition.