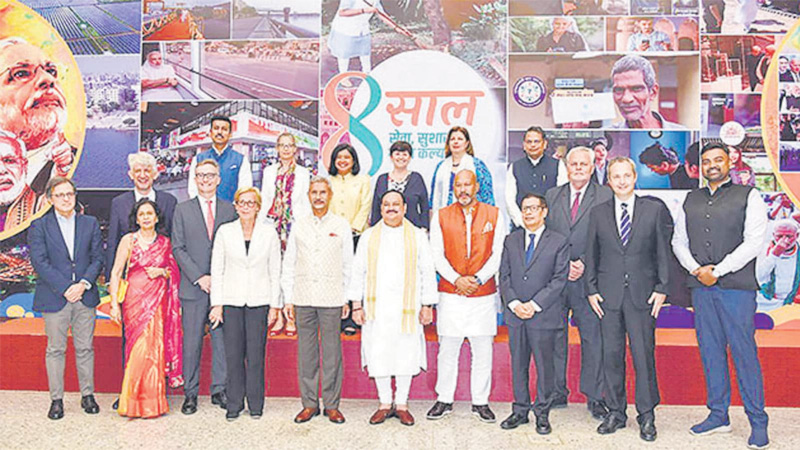 Addressing the visiting diplomats Shri Nadda said that it is our belief that there should be better communication between the political system and political parties of different countries so that we can understand the vision of each other. The BJP firmly believes in a healthy democracy and shared cultural ties, he said. During the interactive session, the BJP National President stressed upon speed, scale and skill with which various development schemes of PM Shri Narendra Modi are implemented. He also elaborated on how BJP has maximum number of participation of women in the party structure and how BJP works with dedication for the welfare of villages, poor, farmers, dalits, backward classes and youth of the country.

The programme was conducted by the in-charge of the party’s foreign department Dr. Vijay Chauthaiwale. BJP National Spokesperson Shri Rajyavardhan Rathod welcomed the guests. A documentary showing the history and development journey of BJP was also shown to the distinguished guests which was appreciated by all the diplomats. After his remarks, Shri Nadda also answered the questions of all the diplomats in detail.

The “Know BJP” campaign was started on the party’s 42nd Foundation Day on 6th April 2022. Its 2nd phase was held on 16 May 2022 while the third meeting was held on 4th June 2022. Including this dialogue, BJP National President Shri Jagat Prakash Nadda has so far interacted with the Diplomats/Head of Missions of 47 countries including the European Union.

BJP President interacts with Minister for Foreign Affairs of Singapore at BJP HQ
The Bharatiya Janata Party National President Shri Jagat Prakash Nadda on 16 June, 2022 interacted with the Minister for Foreign Affairs of Singapore, Dr. Vivian Balakrishnan at the BJP headquarters in Delhi. He was accompanied by Singapore High Commissioner to India, Shri Simon Wong. The two leaders discussed ways to strengthen the India-Singapore Strategic Partnership and exchanged views on regional and international developments.

In his address, the BJP National President welcomed the visiting Foreign Affairs Minister of Singapore. Shri Nadda briefed Dr Balakrishnan about the prevailing political situation in India. He also informed Dr Balakrishnan about the functioning of the BJP and how it is engaging with youth and other sections of the society besides how the world’s largest political party engages with its workers at the grassroot level. The two leaders also discussed various issues of national and international importance.

In his concluding remarks, Dr Balakrishnan thanked Shri Nadda for hosting him at the BJP headquarters and having insightful discussions. Dr Balakrishnan said he got new information and clear perspective about the BJP’s activities and its functioning, and also about the various initiatives and programmes of the Narendra Modi government.