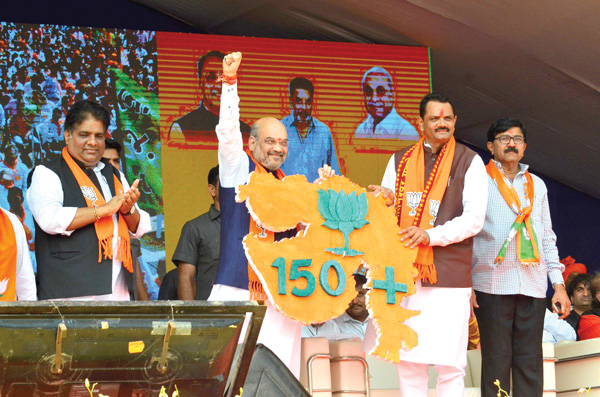 Congress has outsourced the Gujarat election. The party doesn’t have a leader, nor does it have a clear-cut strategy, BJP National President Amit Shah said at an election meeting in Surath event on 15 Novemebr, 2017.

Criticizing Rahul Gandhi he said the Congress has outsourced the Gujarat polls by not promoting any local leader as the face of its electoral campaign.

Over the last few weeks, the Congress party’s ‘Navsarjan Yatra’ in Gujarat has been spearheaded by party vice-president Rahul Gandhi, who is traversing through temple towns and addressing multiple rallies every day to attack the BJP in its citadel.

However, Gujarat Congress leaders have been conspicuous by their absence (or perhaps, sidelining) from the campaign trail.
Congress should clarify under whose leadership they are contesting the Gujarat election. Why haven’t they announced a candidate for chief minister?, Shri Shah challenged.

The BJP president alleged that the Congress was resorting to schismatic politics in the state, pointing out how politicians from different social backgrounds, like Patidar leader Hardik Patel, have been flocking to it lately.

Congress is working to divide the people of Gujarat on communal lines. This is an old habit of the Congress, to play caste-based politics but the people will no longer be fooled by them, said Shri Shah.

Shri Shah asserted that the BJP will secure a landslide victory in the upcoming election. “BJP will win more than 150 seats and once again form the government in Gujarat,” he declared.

Shri Shah further added that traders will realize within a year that the Goods and Services Tax (GST) and unified tax regime is an ‘aashirwad’ (blessing) on the people.