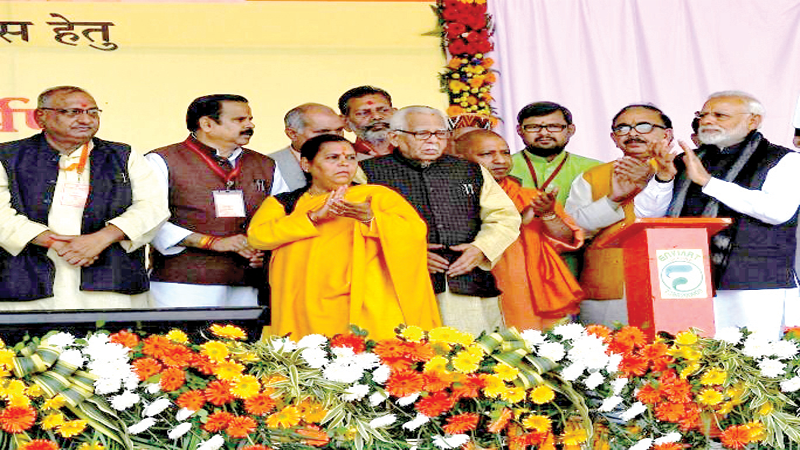 Addressing a public gathering on this occasion, he said, “Our neighbours’ intentions will be given a befitting reply by the people of India. All major world powers are standing with us & supporting us. The messages I have received show that they are not only sad, they are angry too. Everyone is in favour of ending terrorism.”

PM said, our brave soldiers have sacrificed their lives and these sacrifices will not go in vain as he promised that the perpetrators of Pulwama attack will be punished. He said, “Our neighbouring country has forgotten that this is a new India. Pakistan is roaming around with its begging bowl but it’s not getting help from the world.”

Laying the foundation stone of Defence Corridor, PM told that the Defence corridor in Jhansi Agra stretch would create a lot of direct and indirect employment to the youths of this region. Many Foreign and Domestic defence related companies will invest in this region. They would impart skill development to the workforce in this region, he added. PM underlined the importance of the project saying that the youth can earn from near their hometown and need not migrate. The defence corridor will also help in making India self-reliant in defence production, he added.

PM laid Foundation Stone of Piped Water Scheme for the rural areas of Bundelkhand Region. He said that this is not only a pipeline project but a lifeline to this drought prone region. It will save the efforts of our mothers and sisters to fetch water from far off places and drinking water would be provided through piped connection to every house.

Under AMRUT scheme, PM laid the foundation Stone of Jhansi City Drinking Water Scheme Phase-II. He told that a Rs 600 crore project is coming up to use Betwa river water for drinking purpose for Jhansi and adjoining villages.

Foundation stone of doubling of 425 km long Jhansi-Manikpur and Bhimsen-Khairar railway lines and Coach Refurbishing Workshop in Jhansi was also laid by the PM on this occasion.

PM inaugurated the electrification of 297 km long section of Jhansi- Khairar section. The projects would create lot of employment opportunities and would lead to the overall development of Bundelkhand region. Speaking on this occasion PM wished that Bundelkhand region will develop like Kutch in Gujarat which is similar to this region.

West- North Inter-Region Power Transmission Strengthening Project to ensure uninterrupted power supply to Western Uttar Pradesh was dedicated to the nation. today. would go a long way in meeting the power demand in this region.

Another highlight was the inauguration of the Pahari Dam Modernization Project. The project will benefit farmers by reducing the water leakage from the dam and make more water available for the farmers.