Prime Minister Shri Narendra Modi on November 14 along with the Heads of states of other BRICS countries participated in the Leaders dialogue with BRICS Business Council and New Development Bank.

Prime Minister said that the BRICS Business Council created a roadmap to achieve the $ 500 billion Intra-BRICS trade target by the next summit and identification of economic complementarities among BRICS countries would be important in this effort. The partnership agreement between New Development Bank and BRICS Business Council would be useful for both the institutions, he added.

PM requested BRICS countries and NDB to join Coalition for Disaster Resilient Infrastructure initiative. He also requested that the work of establishing the Regional Office of NDB in India should be completed soon. This will give a boost to projects in priority areas, he added.

PM concluded that our dream of strengthening BRICS economic cooperation can be realized only with the full cooperation of the Business Council and New Development Bank.

Some of the significant announcements made by the Prime Minister included the following:

(iii) Another initiative was on Sustainable Water Management. PM has offered to host the first BRICS Water Ministers Meeting in India.

(iv) Since, India has been a world leader in film production and technology. India will host the BRICS Film technology Symposium in conjunction with FICCI-FRAMES in Mumbai in March 2020.

(v) Terrorism has been an important area of focus in BRICS and, as Brazil just hosted the first BRICS Seminar on Strategies to counter terrorism. BRICS has also set up 5 sub working groups on terrorism. PM announced that India will host a BRICS workshop on Digital Forensics. (vi) PM also mentioned that India will host the BRICS Youth Summit with focus on areas like start ups, hackathon, games etc. This is in keeping with the people-to-people initiatives taken by India during our Presidency in 2016, all of which has been welcomed and sustained over the last few BRICS chairship.

(vii) PM announced his intention to initiate BRICS internship and fellowship Programme for students from all BRICS countries. 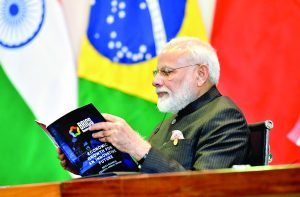 
Prime Minister Shri Narendra Mod also held bilateral discussion with member countries of BRICS on the sidelines of the 11th BRICS summit at Brasilia on 13 November 2019.

Prime Minister Shri Narendra Modi met Mr. Jair Messias Bolsonaro, President of the Federative Republic of Brazil. Prime Minister Modi invited the President of Brazil to be the Chief Guest at the Republic Day 2020. The Brazilian President has accepted the invitation with pleasure. Both leaders agreed that on this occasion the two countries can comprehensively enhance our strategic partnership. PM Modi said that he looked forward to discussing matters relating to trade. He also outlined areas for potential investment from Brazil , including in areas of agricultural equipment, animal husbandry, post-harvest technologies and biofuels. The President of Brazil expressed his readiness and informed PM that a large business delegation will accompany him to India. They also discussed other areas of cooperation including space and defence sectors. PM welcomed the decision of President to grant visa free travel to Indian citizens.

President Xi Jinping conveyed his deep appreciation to PM for hosting him at the 2nd Informal Summit in Chennai and said that he would not forget the welcome given to him by PM Modi and the people of India. He invited PM for the 3rd informal summit in China in 2020. The date and venue for which will be determined through diplomatic channels.

They both agreed on the importance of maintaining close dialogue on matters relating to trade and investment. President Xi thanked PM for India’s substantial participation in the just concluded China Import Export Expo in Shanghai. The two leaders agreed that the new High Level Mechanism on Trade and Economy should meet at an early date.

In the bilateral meeting with the Russian President Vladimir Putin both leaders noted with satisfaction that the USD 25 billion target of bilateral trade by 2025 has already been achieved. The two leaders decided that the 1st Bilateral Regional Forum at the level of Russian Provinces and Indian States be held next year to dismantle the barriers of trade at regional level.

The two leaders noted the stability and progress made in imports of oil and natural gas. President Putin highlighted the potential of Arctic region in natural gas and invited India to invest in the region.

The two leaders also reviewed the progess made in the field of Infrastructure particularly railways in context of raising the speed of the Nagpur-Secunderabad sector railway line. The leaders also noted with satisfaction the cooperation in Defence sector and in the field of Civil Nuclear Energy. They welcomed the prospects of cooperation in civil nuclear energy in third countries.

President Putin reiterated the invitation to PM to visit Moscow to participate in the Victory Day celebrations next year, which PM gladly accepted.