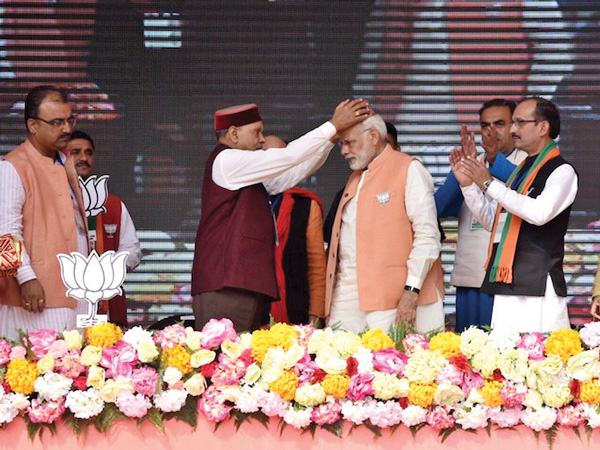 Comparing the Congress with termite, Prime Minister Shri Narendra Modi on 04 November, 2017 gave a call for uprooting the party from Himachal Pradesh “as termites need to be eliminated so that they do not resurface.” He claimed the Congress had conceded defeat in the state, its senior leaders having “run away” from campaigning.

Addressing his second election rally in Chambi, Kangra district, he said, “The party’s top leadership has run away from the battle in Himachal, leaving CM Virbhadra Singh to fend for himself.”

Justifying demonetization, he said only the dishonest were still rattled by the move. “The dishonest are attacking me, but I am not afraid.” Listing NDA government’s achievements, he said in the last three years 15,000 villages had been provided electricity.


The country would not forgive the Congress: PM

Speaking at a rally in Sundernagar in Mandi, PM Shri Narendra Modi launched a stinging attack on the Congress over corruption as he dwelled on the coal scam, 2G Spectrum scam and several other scandals during the Congress-led UPA government. He said the people of the country would not forgive the Congress for such wrongdoings.

“The Congress plans to mark November 8 as ‘black day’ to mislead the people on demonetization. But the people are aware of such tactics by the party that spread corruption everywhere. The BJP has brought in a new law to tighten the noose over benami land deals. The Congress leaders are worried that action may be initiated against them for such transactions,” the PM said.

He claimed the state had progressed most when Prem Kumar Dhumal was CM. “He will take Himachal to new heights of development.” Seeking votes for Dhumal, a “commoner”, he asked the people to vote out the “royals.” 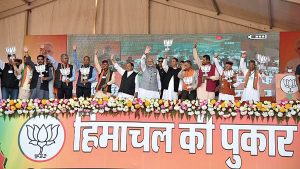 Corruption is the only identity of the Congress party

Prime Minister Shri Narendra Modi on November 5 hit out at the previous Congress-led UPA government for “abusing” subsidy of Rs 57,000 crore meant for the poor.

“People used to loot the treasury in the name of subsidies. In the past, Rs 57,000 crore used to get leaked due to rampant corruption in implementing subsidies,” Shri Modi said at an election rally at Una ahead of the state’s November 9 assembly polls. Now our policy has stopped the leak. The leaders in Congress cannot bear this, so they are attacking me.

Taking potshots at former Prime Minister Rajiv Gandhi’s statement that Re 1 ends up as 15 paise when it reaches villages, Shri Modi said, “Rajiv was such a doctor who diagnosed the problem of corruption, but did not do anything about it (sic)”.

Taking a dig at the Congress central leadership, he said the party had already left the battlefield, and it was a one-sided contest.
“Mujhe iss chunav mein ek baat ka dukh rahega, mazaa nahi aa raha hai, kyunki Congress maidan chhod kar bhaag gayi hai (I will regret one thing about this poll. It isn’t fun because the Congress has accepted defeat),” he said.

The Prime Minister said his government was focusing on laying road networks in the state. Whereas, corruption is the only identity of the Congress party. All Congress leaders think we have come to power to collect money.

Donning a Himachali cap, Shri Modi, on his third and last election tour of the state, said, “In the last 20 years, there has not been a single election where I have not been involved. But this is an unprecedented election. I know where the wind is blowing.
“A storm is raging here against the corrupt Congress.” Batting for his government’s biggest tax reform with the implementation of the Goods and Services Tax (GST), Shri Modi said it has benefited the transport sector.

“This country has warmly welcomed GST as it has immensely benefited the transport sector. Truck movement between the states has gained pace.” Talking tough against black money and holders of ‘benami’ or illegal properties, PM said after demonetisation at least three lakh companies came under the scanner.

“We did a sample survey of 5,000 companies and saw that they at least transacted Rs 4,000 crore worth of black money. I can only imagine what will happen if we look at the transactions of all the companies.” 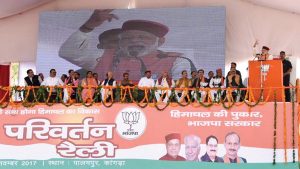 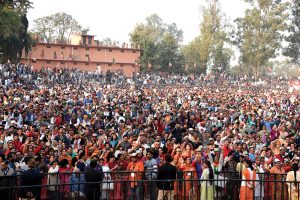 Assembly elections were a battle between good and bad governance

In Palampur PM Shri Narendra Modi accused the Congress of criticising his government’s measure of scrapping old high-value banknotes because they were afraid that the Uttar Pradesh’s “decisive” mandate in favour of the Bharatiya Janata Party would be repeated in the forthcoming Himachal Pradesh elections.

Congress is planning to burn my effigies on November 8. The problem is that a ‘chai wala’ has become PM. People happy with demonetization. People having black money should know that I am not afraid of processions,” he said, referring to Opposition’s plans to observe the day — the first anniversary of the central government’s shake up of the economy through demonetization — as “Black Day”.

He claimed that these assembly elections were a battle between good and bad governance.

These elections will decide the fate of Himachal. Next five years are crucial for good governance and progress, Shri Modi said.
He cited work done under former BJP chief ministers Shanta Kumar and Prem Kumar Dhumal — the party’s chief ministerial candidate for these elections — in the areas of drinking water, education and tourism.

Shanta Kumar ji took up Herculean task of laying water pipelines, Dhumal ji’s contribution towards promoting tourism in HP is well known. Whereas corruption is the only identity of the Congress party. All Congress leaders think we have come to power to collect money. I don’t know what would they do with that money.