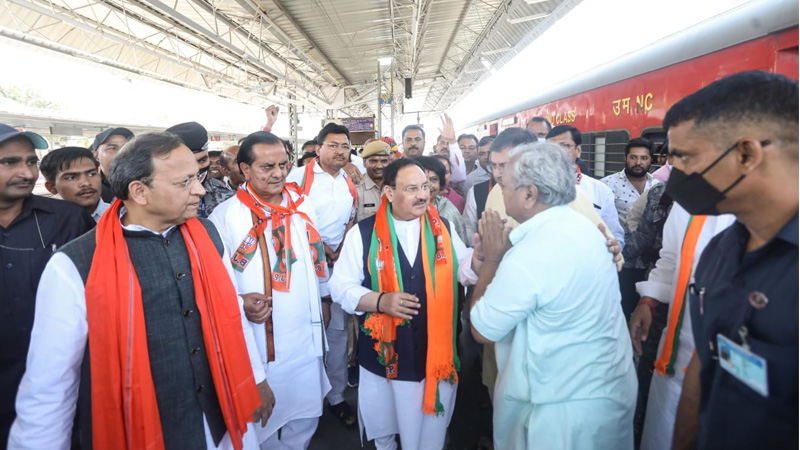 Shri JP Nadda arrived in a two-day Pravas in Sawai Madhopur by Train. He traveled from New Delhi Railway Station at 7.10 am by New Delhi-Sogaria train on 02 April, 2022 and reached Sawai Madhopur railway station by 11.38 am in the morning. Thousands of BJP Karyakartas and leaders extended a grand welcome to the BJP National President. After the welcome, Shri Nadda addressed a conference of Scheduled Tribes intellectuals. Workers of Sawai Madhopur, Karauli, Dausa, Tonk districts participated in the program. After the program, he chaired a meeting of BJP office-bearers and workers of Bharatpur division.

Addressing the Sawai Madhopur event, Shri JP Nadda highlighted BJP’s role in ensuring development of tribals in the state and the entire country. “The Congress ruled from 1947 to 1998 and again from 2004…But you had to wait for the Atal Bihari Vajpayee government to get a ministry for tribals. You will have to understand which party and which leader cares for tribals,” the BJP President said.

Training his guns on the Congress over its dynasty politics, he said such dynastic parties are a threat to Indian democracy. “There is nothing Indian or National or Congress in ‘Indian National Congress’. It is a party of a family, and of a brother and a sister,” he said.

“Not many people know that there is a high tribal population in Jammu and Kashmir. But in Independent India, not even one Lok Sabha or Assembly seat was reserved for tribal brothers (in J&K). Today, Article 370 has been abrogated due to the will power of PM Shri Modi and the strategy of Shri Amit Shah. Now delimitation is taking place, which is at its final stage after which tribal brothers from Jammu and Kashmir will win and come to the Lok Sabha and the Assembly,” the BJP National President said.

Shri JP Nadda also criticised the Ashok Gehlot-led Congress government, accusing it of being unable to control the law and order situation in Rajasthan.

Lotus will bloom in Rajasthan in 2023

The BJP National President congratulated Rajasthan BJP and said, “Lotus will bloom in Rajasthan also in 2023 Assembly elections and the BJP will form the government while contesting elections on the PM’s face and under his leadership.”
He also mentioned tribal heroes such as Birsa Munda, and highlighted the role of Rajasthan’s Bheel community in helping Maharana Pratap during his battles with Mughal emperor Akbar.

Among others, state party President Shri Satish Poonia, other senior leaders of the party, eminent ST leaders from the region and thousands of karyakartas were present at the event.