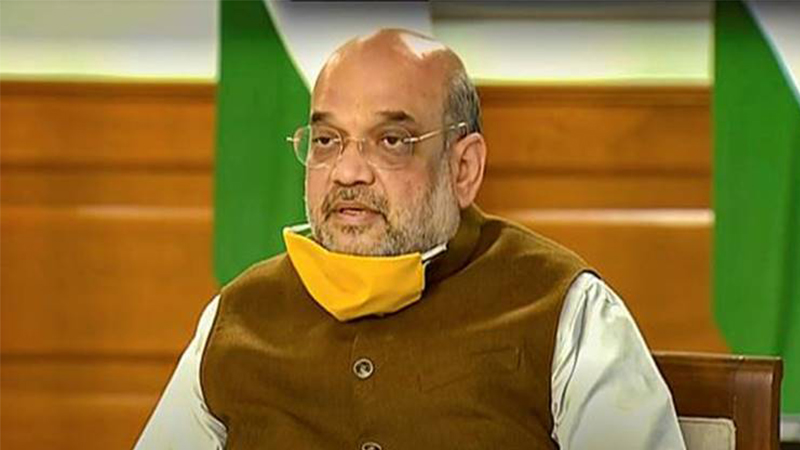 Union Home Minister Shri Amit Shah on November 17 lambasted Gupkar gang fiercely and accused them for involving foreign forces in Jammu and Kashmir. He also alleged that the gang is indulging in seditious activities and insulting the tricolor.

Shri Shah said that the gang is going global! They want foreign forces to intervene in Jammu and Kashmir. The Gupkar gang also insults the tricolor of India. Even as one of the member of this unholy Gupkar alliance says that he will bring Article 370 back with the help of China, the other leader says that she will not raise the tricolor nor allow it to be hoisted in the state. One of the members want to be on the side of China and the other does not want to raise the tricolor.

Amidst all this, Congress leaders say that removal of Article 370 is unfair and they will bring it back. The country wants to know if Congress President Smt. Sonia Gandhi and former Congress President Shri Rahul Gandhi secretly support such nefarious moves of the gang. They should make their stand clear to the people of India.

The Union Home Minister said that the Congress and the Gupkar gang want to bring Jammu and Kashmir back to the era of terror and unrest. They want to take away the rights of Dalits, women and tribals by bringing back Article 370. This is why they are being rejected by people everywhere.

He further said that Jammu and Kashmir has always been, and will remain an integral part of India. The Indian people will no longer tolerate such an unholy global alliance ‘that runs against the national interest’. Shri Shah said that the Congress always stands against the country. There has been a secret declaration of people’s alliance in Kashmir called Gupkar alliance. It has 10 parties, mainly National Conference and PDP and now Congress is also becoming a part of it.

They are heading for District Development Council (DDC) elections. They have a fixed agenda that Article 370 should be implemented again. They do not want certain laws including the Prevention of Corruption Act in Jammu and Kashmir so that they can continue with their culture of corruption. Now that the Congress has secretly joined the coalition, it should also clarify whether it supports the leaders of this nefarious coalition seeking help from China and not raising the tricolor.

The Union Home Minister said that on the one hand, the Prime Minister of the country Shri Narendra Modi, is engaged in the development of Jammu and Kashmir by realizing the dream of ‘SabkaSaath, SabkaVikas and SabkaVishwas’, and on the other hand some of the opposition political parties are continuously working against the country which include Congress too.