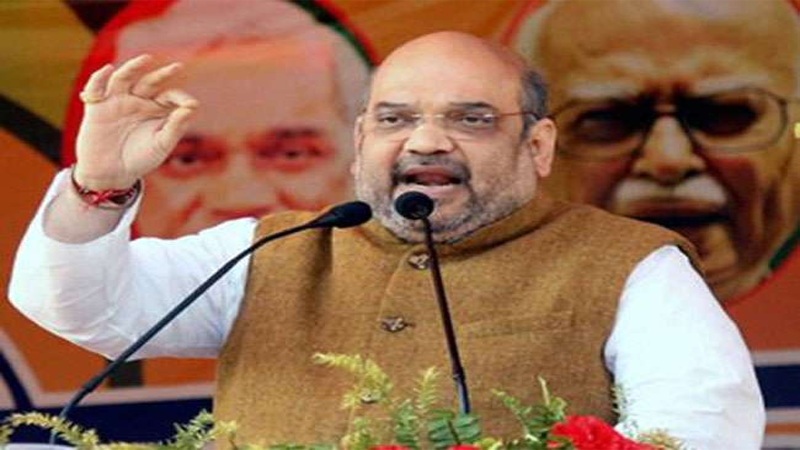 BJP President Shri Amit Shah dubbed the Congress’s election manifesto a pack of lies and said it was an insult to the country’s people and its brave soldiers.
In a statement, he hit out at the opposition party over its promise to repeal Section 124A (sedition law) and review the Armed Forces (Special Powers) Act, saying it is bringing a smile to terrorists and separatists while lowering the morale of the armed forces.

Repealing the sedition law will lead to chanting of slogans like “Bharat tere tukde honge” (India will break into pieces) by anti-national gangs instead of “Bharat mata ki jai” (Hail Mother India), he said.

He said the party was misleading people in the name of its NYAY scheme or the Minimum Income Support Programme (MISP).

Terming NYAY as a scheme of “injustice”, Shri Shah said the Congress was just trying to extract votes by misleading with its “big lie” of MISP as it said it will implement the policy once the economy expands and support will be taken from state governments. Congress is doing injustice to people in the garb of doing justice, he said.

The BJP President said this was not the first time the Congress party was lying.
It has a long history of lies. Not a single promise has been fulfilled by the party yet, he said.

He also took a dig at the party’s promise to amend Code of Criminal Procedure.
Hitting out at the Congress over former Jammu and Kashmir Chief Minister Omar Abdullah’s remark on having a separate President and Prime Minister for the state, Shri Amit Shah said, “Will Congress answer how can one country have two Prime Ministers? Is Jammu and Kashmir not a part of India?”

He also asked whom was the Congress trying to impress by promising unconditional dialogue with separatists and what is the reason that terrorists, separatists, the Pakistani prime minister and the Congress have same kind of language in their manifestos.