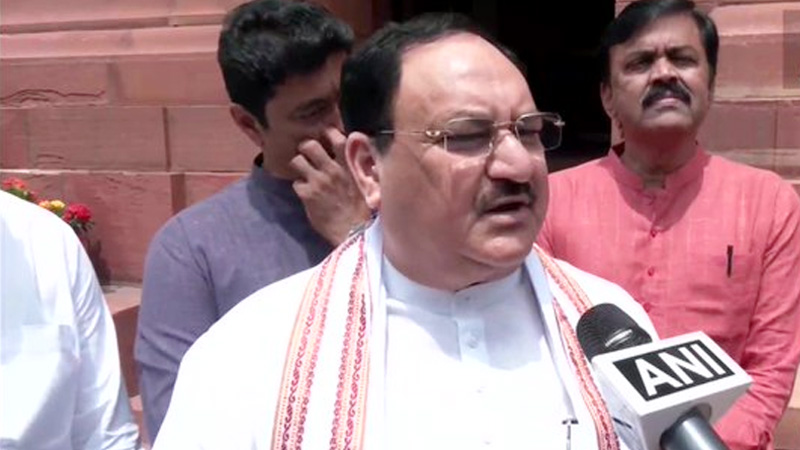 Salient points of the address given by BJP National President Shri Jagat Prakash Nadda to the media in the Parliament premies in New Delhi on 27 July, 2022 over the investigation into corruption cases against top leadership of Congress party.

–The Congress party which is holding protests over the investigation into corruption cases against their top leadership, it is not “Satyagrah” but it is “Duragrah” in support of lies and corruption.

–The reality is that the Congress party is trying to influence and pressurize law enforcement agencies and trying to shield the truth.

Unfortunately the Gandhi family considers itself to be above the law and the country. They cannot tolerate if someone questions them

–If they are not happy with the investigation of our law enforcement agencies, they are free to approach our courts. To protest against our law enforcement agencies and to try and sabotage the investigation into corruption cases proves that the Congress party is legally on a weak footing in the cases of corruption and they do not want the truth to come out.

–Congress party president Sonia Gandhi is being questioned by the ED in the National Herald scam involving thousands of crores and the Congress party is doing so called Satyagraha against it. It is nothing but an unholy attempt to save the family. This is a political campaign to save one particular family.

–Everyone knows that crores of rupees were swindled in the ‘National Herald’ corruption case. All those linked with this scam should appear before the law enforcement agencies and give their statements, this is their primary responsibility. But unfortunately the Gandhi family considers itself to be above the law and the country. They cannot tolerate if someone questions them. The Gandhi family considers itself above the law.

–Our nation runs as per our Constitution and as per law. To put something before the law is the right of every citizen and it is also important. But the Congress party by holding protests against the ongoing investigation in the National Herald corruption case is unfortunate and uncalled for which also shows that the Congress party and one particular family, the Gandhi family, consider themselves above the law.

–This is not going to work in our country. Law is the same for all citizens. It is the duty and responsibility of every citizen to follow the law of the land and to cooperate with the law enforcement agencies.