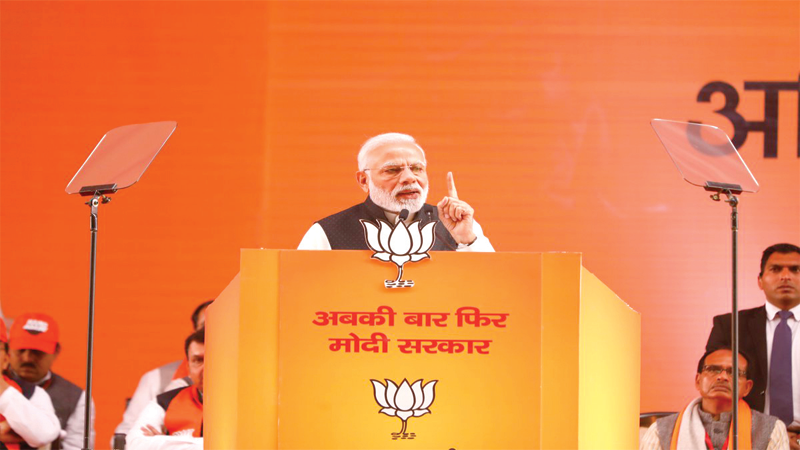 Addressing the concluding session of the two day long BJP National Convention held at Ramlila ground in New Delhi on 11-12 January, 2019 Prime Minister Shri Narendra Modi said, “Will you ever like such a Servant (Sevak) who steals from the house, who shares your domestic issues with the neighbours or ignores the problems at home and takes 2-3 months holidays. Like you select your sevak for home, decide what type of Pradhan Sevak you want for the country.

The PM said the last 4 years have shown that nothing is impossible. Imagine how the next 5 years can further improve the condition of the country’s situation.

We are publishing the salient points of the Speech of PM Shri Narendra Modi for our readers.

This is the first national council meeting without the presence of Atal Bihari Vajpayee ji. I pay my respect to his memory with the hope that his blessings continue to lead our karyakartas.

We are in government at the centre and in 16 states where we are either leading the government. or a part of them.
Over the past 2 days, several resolutions have been passed on farmer welfare, economic issues, political issues. We need to ensure this information reaches every household.

It is for the first time in the history of the country that there is not a single allegation of corruption against the government.
The first 10 years in the 21st century were very crucial for the country. Just as I say that had Sardar Vallabhai Patel become India’s first PM,this country would have been in a far better situation had Atal ji government continued for another term.

The nation is Today Marching toward honesty. this is evident from the fact of increase of tax payers, those who have left gas subsidy, among others. They have faith that their contribution towards national development is being meaningfully utilized.
Our core mantra is Sabka Saath Sabka Vikas and Ek Bharat Shreshtha Bharat, which includes all round, regional agricultural and Development for all Indians.

10 % Quota in education and employment is a step to fulfill the aspiration of those who were economically challenged. This has been achieved without touching the provisions that already exist for the various other sections today.

This is also a step towards providing equal opportunity to those from the forward sections.

I am aware same people are trying to spread falsehood and discontent but they will not succeed.

Many steps and opportunities are being provided to our youth. Take the example of sports and the talent is witness to this.
We worked for women’s empowerment through several programs over the past 4.5 years. For example, maternity leave, involvement in the armed forces, education through schemes like Beti Padhao Beti Bachao.

We are transparently working towards strengthening the condition of our farmers. but before finding solutions, we need to first see the problems that have brought farmers to this state. The government is working on several initiatives. We fixed MSP at 1.5 times of the cost of production. How is it that today on TV no more breaking news of increase of dal prices. This is because over the last 4.5 years we have purchased 95 lakh tons compare to 7 lakh tons that last government procured.

I do not say that all problems are over but we have worked honestly to solve problem of the people.

Is their any program or scheme that has my name on it. this is because we are taught that nation is first, party next, self last.
I do not claim that everything has been achieved but I do claim that I have honestly day and night worked to improve the lives of the poor l. We have worked on everything such as providing electricity to all village, highways, toilets. We have worked faster than ever before.

Public money in the banks had become private wealth and public funds were distributed as loans. From independence till 2008 in 60 years banks gave loans totally of 18 lakh crores. but between 2008 to 2014 this amount of loans increased to 54 lakh crores, an increase of 34 lakh crores as loans over 6 years. this happened because of “Congress process” where banks were made to give loans to the preferred few in thousands of crores. Under “Common process” where citizens got loans of small amounts or the middle class.

We worked to change this and today thousands of crores outstanding amount have been returned on account of the insolvency bankruptcy proceedings.

For the first time in history, a foreign arms dealer has been extradited. This investigation is revealing that his involvement was not limited only to the helicopter scam but also in trading the fighter plane contract.

No matter how much they abuse me, Chowkidaar Rukne wala nahi hai.

These days an attempt is being made to form mahagathbandhan. these parties that historically have opposed the congress, they are joining hands with the congress. These is betrayal of the voters. we have seen in Telangana where it was demolished and in Karnataka their CM of few months now says he is like a clerk. In Rajasthan and MP, pound of flesh is being extracted for support to the government.

They all are now working that a “Majboor Sarkar” comes in the country and not a Majboot government. they want to enable corruption but the country wants a strong government so that farmers get their due, our armed forces are strengthened corruption is eliminated. No scam like 2G, commonwealth Games, happened in the last 4 years. Digital India is strengthened where no loot takes place in a allocating resources, no scam in health and a scheme like Ayushman Bharat provides health benefits to 10 crores families.

Our path is to touch the hearts of every Indian. we are a party born on principles.

Share all these with every voter and let this reach every household.

They opposed enemy property act, OBC constitutional status bill, citizenship act. The Congress has opposed it. Now the Congress and its lawyers are opposing the Ayodhya issue. we need to remember this and not let anyone forget this attitude of the Congress.

The Congress opposed every move that is for the benefit of people join hands with the “Tukde tukde gang”, those who call surgical strikes as “Khoon Ki Dalali” The government of A.P., Chhattisgarh and West Bengal have said CBI should not investigate in their state. Why are they scared of investigation by the CBI.

When I was CM in Gujarat each and every agency was used to target me. In fact one of their senior leaders said in Gujarat that Modi will be jailed soon. The recent judgement of CBI court in Mumbai confirms that Congress attempt to somehow trap Modi but we never intervened in agencies from doing their job because we have faith in agencies and courts. Today they are opposing CBI, tomorrow it be Election Commission, courts any other agency. Their belief is in falsehood and corruption whereas we believe in the constitution of Baba Saheb Ambedkar.

Take the example of the National Herald case which is under investigation since 2012. Despite notices from so many agencies, Congress’s first family doesn’t believe in joining investigation because the truth scares them. They are out on bail and don’t respect institutions of the country. I submitted myself to a nine hour questioning before an officer because I have faith on law and institution.They are out on bail and only behave in dynastic privileges.

Will you ever like such a Servant (Sevak) who steals from the house, who shares your domestic issues with the neighbor or ignores the problems at home and takes 2-3 months holidays. Like you select your Sevak for home decide what type of Pradhan Sevak for the country.

Modi is also a product of the organisation. we all have reached here with the effort of lakhs of karyakartas.

When we say Mera Booth Sabse Majboot it is similar to how a farmer sows the seed at the right time for reaping good result.
The last 4 years have shown as that nothing is impossible. Imagine how the next 5 years can further improve the condition of the country’s situation.

Let us all together bring about change and improvement and recall the inspiring words of Swami Vivekananda, we have miles to go and make a New India.