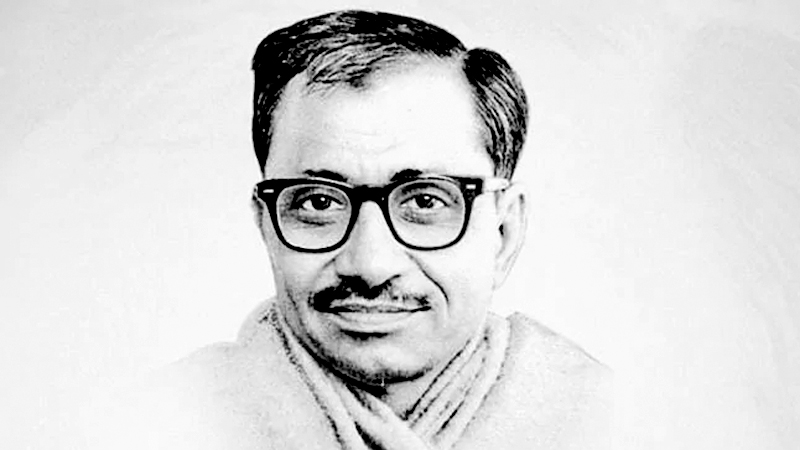 THE distortions of Dharma that we now-a-days see all around us are largely the result of foreign education. The English word ‘religion’ has substantially contributed in distorting the pure meaning of Dharma. The British first heard the word when they came to India. They had no word of an equally comprehensive meaning.So they translated it as religion. Such translation has distorted the meaning of Indian words. Dharma is a very wide term which includes many religions. A religion a system of worship, and there are many such systems prevailing in this land. But in spite of these systems and sects Dharma is one. Dharma is that which is good for everyone irrespective of the system of worship and can open up for him the way to salvation.


RELIGION means a creed, or a sect, it does not mean Dharma. Dharma is a very broad concept. It is concerned with all aspects of life. It sustains society. It sustains the whole world. That which sustains is “Dharma’’

The fundamental principles of Dharma are eternal and universal. Yet their implementation may differ according to time, place and circumstance.

The complete treatise on the rules in general and their philosophical basis is the meaning of Dharma.

These rules cannot be arbitrary. They should be such as to sustain and further the existence and progress of the entity which they serve.

Kama too can be attained only through Dharma. Having produced the material things, such as nice food, when, where, how and in what measure it will be used can be determined only by Dharma. If a sick person eats food meant for a healthy one and vice versa, both of them will be at a disadvantage. Dharma helps in restraining the natural tendencies of man whereby he is able to determine what is beneficial to him apart from what is pleasurable. Hence Dharma is given the fore- most place in our culture.

GOD cannot act contrary to Dharma. If he does, then he is not omnipotent. Adharma is a characteristic of weakness, not of strength. If fire; instead of radiating heat, dies out, it is no longer strong. Strength lies not in unrestrained behaviour, but in well-regulated action. Therefore God who is omnipotent is also self-regulated and consequently fully in tune with Dharma. God descends in the human body to destroy adharma and re-establish Dharma, not to act on passing whims and fancies. Hence even God can do everything but act contrary to Dharma. But for the risk of being misunderstood, one can say that Dharma is even greater than God. The universe is sustained because He acts according to Dharma.

NEITHER the Legislature is higher nor the Judiciary. Dharma is higher than both. The Legislature will have to act according to Dharma. Dharma will specify the limits of both. The Legislature, the Judiciary or the people, none of these is supreme. Some will say, “Why, people are sovereign. They elect”. But even the people are not sovereign because people too have no right to act against Dharma. If an elected government allows people to go against Dharma and does not punish, then that government is in reality a government of thieves. Even the general will cannot go against Dharma. Imagine the situation, if by some manoeuvring, thieves gain a majority in the government and send one of their ranks as an executive. What will be the duty of the minority if the majority is of thieves and elects a thief to rule ?

IN our country we cannot think of any sentiment with which Dharma is not bound up. Hence we feel that our State cannot forsake Dharma. A secular State, in our opinion, does not mean a State without Dharma. The word Religion means a tenet in this country and those who believe it are called sects like the Jains, Shaivas and Christians. Naturally the State cannot belong to any of these sects. It must look on all with an equal eye. So we can say that a State is non-sectarian. This would be the ideal, but such a State, even without being partial to a particular sect or against some other sect, can encourage ways and means of achieving both material and spiritual progress and thus be called Dharma Rajya.

IF the four million people of Kashmir say that they want to secede, if the people of Goa say they want to secede and if some say they want the Portuguese to return, all this will be against Dharma. Of the 45 crore people of India, even if 449,999,999 opt for something which is against Dharma, even then this does not become truth. On the other hand, even if one person stands for something which is in accord with Dharma, that constitutes truth, because truth resides with Dharma. It is the duty of this one person that he tread the path of truth and change people. It is from this basis that a person derives the right to proceed according to Dharma.

Let us understand very clearly that Dharma is not necessarily with the majority or with the people. Dharma is eternal. Therefore, in the definition of democracy, to say that it is a government of the people is not enough ; it has to be for the good of the people. Dharma alone can decide.. Therefore, a democratic government “Jana Rajya’’, must also be rooted in Dharma i.e. a “Dharma Rajya’’. In the definition of ‘Democracy’ viz. “government of the people, by the people and for the people’’, ‘of ‘ stands for independence, ‘by’ stands for democracy, and ‘for’ indicates Dharma. Therefore the true democracy is one where there is freedom as well as Dharma.

ONE of the main reasons for looking to the West for a solution to economic problems is the mistaken belief that indian culture and religion, being spiritual, are indifferent towards problems of a material life. This erroneous belief is the result of deliberate propaganda and of a wrong meaning of spiritualism. As a matter of fact our definition of religion (‘Dharma’) has taken materialism fully into account. Dharma is defined as that which leads to both physical and metaphysical development. Materialism and spiritualism are neither contradictory nor separate from each other.

Spiritualism is a point of view of life from which we look at all problems. If spiritualism can give a true definition of the universe there is no reason why it should not give us a solution to all problems of the world. India has not thought only of the metaphysical world, it has thought of material wealth also. Chanakya has said that happiness depends upon Dharma and Dharma depends upon material wealth.

THE Vedic Religion has always underdone transformation. This religion is dynamic and living. It is not like a stagnant pool. New thoughts have always entered this religion and old thoughts have developed through change, but every new change has kept up its link with the old. Every new agitator maintained a feeling of reverence for his ancestors. Every new reformer gave respect to our ancient tradition, our ancestors and achievements and at the same time propounded new thoughts to suit the times. As these new thoughts had not broken off with the basic thought, they did not in any way harm the life of the nation. On the contrary, they contributed to its development.