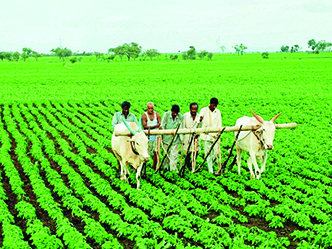 “Some believe nothing can be done in Bundelkhand. But it can be made number one in UP,” said the Prime Minister Shri Narendra Modi, on Monday addressing an election rally in Oral, in Jalaun district of Bundelkhand, the most backward region in UP. This part is considered one of the most draught prone and underdeveloped regions in the entire country and that is why Shri Modi’s promise here will ring a resonance of hope when he compared it with the Kutch in Gujarat. This is no barren election rhetoric. For, as Chief Minister, before he became Prime Minister, Shri Modi has famously transformed the hopelessly parched Rann of Kutch into a land of promise for the milling tribal population of the state.

Shri Narendra Modi has an unbeaten record of ushering in an era of double digit agricultural growth trajectory in Gujarat between 2003 and 2014, when the national average was languishing at less than two per cent. Shri Modi has also vowed to make the incomes of the Indian farmers double in the next four years. Taking cue from Shri Modi’s success story, in Gujarat, a state which was never considered an agrarian state, because of the vast Saurashtra region which used to witness massive migration, cattle and people every year because of draught, many other states like MP, Chhattisgarh and now Maharashtra have adopted the techniques which he pioneered in his state. Shri Modi’s agrarian growth strategy was built on better irrigation, modern farming tools, easy availability of cheaper farm loans, 24-hour electricity and tech savvy marketing of farm produce. In each of these initiatives there is a large volume of innovative planning and hands on implementation. Shri Modi has been trying to replicate his experience in the entire country.

“Satellites launched by India can be used to check clandestine activities.” The Prime Minister was referring to illegal mining of mineral resources in the backward regions like Bundelkhand. Soil testing to find the health condition of agricultural land is a major step in the direction of agrarian revolution. Neem coated urea is another. Building check dams, water conservation through ponds and other water conservation methods, raising the ground water level, reducing water wastage by promoting drip irrigation, changing crop pattern studying the soil fertility, water availability and market condition are other ingredients of this approach. Then reaching technology through electrification, computerization of Panchayats, building smoother roads through Pradhan Mantri Grameen Sarak Yojna which will also help marketing and internet connectivity which has been promised to reach every village are the things that will ensure development at the grass roots level.

Never before have so many poor people become bank account holders in India. Under the Jan Dhan Yojna about 30 crore new bank account has been opened. This financial inclusion is at the centre of a dynamic agrarian economy. The government in the financial year has saved Rs 50,000 crore through direct cash transfer scheme. This with free cooking gas connection to 50 million BPL families is changing lives of millions of families. The rural job guarantee scheme has been reworked with highest ever annual allocation and ensuring the availability of farm labour. These will also limit the flight of labour to cities leaving their traditional farm labour.

How can agriculture become profitable? How can the farmer income double by the turn of this decade? Will it ensure the end of rural indebtedness and farmer suicides? Yes, all this is possible if the Prime Minister is able to replicate at the national what he achieved in Gujarat. Shri Modi has put the common man at the pivot of his economic narrative. He has placed great faith in the Indian farmer and brought agriculture to the centre stage of his growth engine. The new schemes, allocation for agrarian transformation tell this fascinating story. Rs 1.87 lakh crore is the next year allocation for agriculture and allied areas. The thrust areas in this are, MNREGA, availability of easy farm loans and better irrigation. The fund for irrigation corpus and dairy processing increased substantially. Crop insurance under Fasal Bima Yojna, along with agricultural credit yojna has Rs 10 lakh crore which is whopping compared to past records. More credit will incentivize farm investment and propel food processing industrialization. This will ensure durability and better returns for farmers. This could also boost job opportunity in rural India.
Rabi crop sowing has seen an eight per cent rise this season. Reports say the kharif crop this season is going to be a record 297 million tone because of better rain fall. The building of better panchayat roads, 2000 kms of coastal connectivity roads and 130,000 panchayats getting high speed broadband under BharatNet will certainly improve marketing and remunerative pricing of farm products making agriculture as a profitable career option. Agriculture production is bound to leapfrog as a consequence of all these measures and the goal of food for all and complete eradication of poverty from the face of India in the near future will become a reality once these policy driven, targeted measures are executed.

(The writer is a senior Economic and Political Commentator. He can be contacted at balashankar12@gmail.com and @drbalashankar)