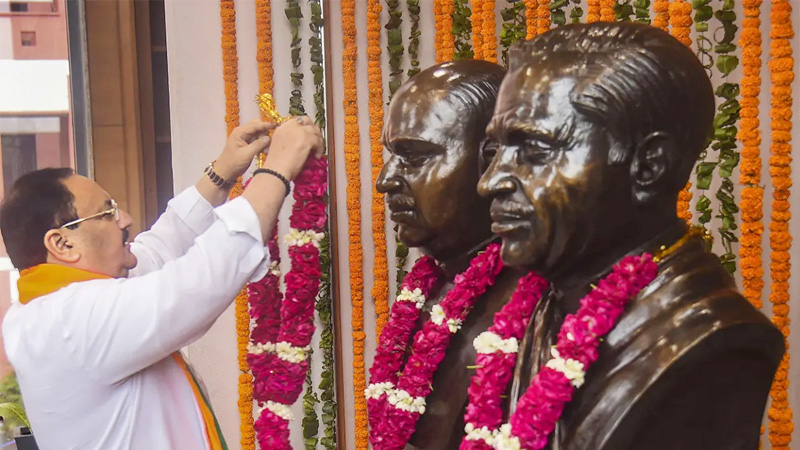 On the Jayanti of Dr Shyama Prasad Mookerjee

On the Jayanti of Dr Shyama Prasad Mookerjee, the Bharatiya Janata Party National President Shri Jagat Prakash Nadda offered rich tributes and also took part in the tree plantation drive held on the occasion at BJP headquarters in New Delhi on 06 July, 2022. Remembering Dr. Mookerjee, Shri Nadda said he was a great patriot, a true nationalist, a strong advocate of cultural nationalism and a great educationist. Today, West Bengal and Punjab are integral parts of India and the entire credit of this goes to Shri Shyama Prasad Mookerjee.

Dr Mookerjee persistently fought and struggled to make Jammu and Kashmir an integral part of India post Independence, and for this, he made the supreme sacrifice. Dr Mookerjee ‘s dream was finally realised by Prime Minister Shri Narendra Modi whose strong will and commitment besides the impeccable planning of Union Home Minister led to the scrapping of Article 370 and Jammu and Kashmir became the integral part of India in true sense.

Dr Mookerjee was deeply concerned and saddened by Pandit Jawaharlal Nehru’s policy of appeasement and aping the Western line on the matters of nation building post Independence. It was for this reason that he created Bharatiya Jan Sangh to give an alternate political ideology to the nation. It was Dr Shyama Prasad Mookerjee who gave the slogan ‘Ek desh mein do Vidhan, do Pradhan, do Nishan nahin chalenge’ (In our country the policy of two Constitutions, two Prime Ministers and two national emblems will not work). For this he started Satyagrah movement, and he even entered Jammu and Kashmir without permit in defiance of the government order.

While entering Jammu and Kashmir on June 11, 1953 Dr Mookerjee was arrested and lodged in jail. He died under highly mysterious circumstances on June 23, 1953. Dr Mookerjee’s mother wrote to the then Prime Minister Pandit Jawaharlal Nehru seeking urgent and fair probe into the death but Pandit Jawaharlal Nehru did not pay any heed to it. Thus the real cause of the death of Dr Mookerjee was not known.
The BJP National President said remembering Dr Shyama Prasad Mookerjee- from his death anniversary on June 23 to his birth anniversary on June 6- the Bharatiya Janata Party does various social work and organise various camps which include giving free aid and assistance to sick and needy people in hospitals, holding massive plantation drives across India and helping poor and needy people. All this symbolizes the BJP workers’ respect and honour for Dr Shyama Prasad Mookerjee.
Shri Nadda said if we all take inspiration from his life and work tirelessly and dedicatedly towards strengthening our nation then it will be a true tribute to this great leader.