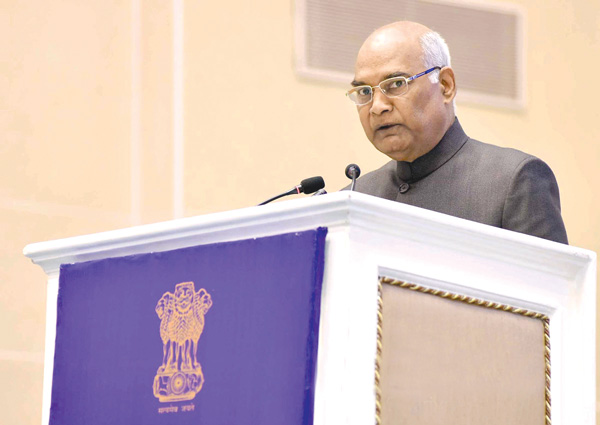 President’s Speech on the eve of 71st Independence Day

President Shri Ram Nath Kovind on the eve of India’s 71st Independence Day, 2017 addressed the nation. In his address he said the some parameters of ‘New India’ are a house for every family, power on demand, better roads and telecom, a modern railway network, rapid and sustained growth. Here, we are publishing highlights of the address.

On August 15, 1947, we became a free nation. Sovereignty and the responsibility for our destiny moved from the British crown to the people of India. Some have called this process a “transfer of power”.

It is crucial to understand that this dream for a free India was rooted in our ordinary villages, in the well-being of our poor and underprivileged, and in the all-round development of our country.

From the earliest days of our freedom struggle, we were blessed with a galaxy of revolutionary leaders who guided our country.
The principles that Gandhiji spoke about are relevant even today.

Sardar Patel instilled in us the importance of national unity and integrity. And of a disciplined national character.

Babasaheb Bhim Rao Ambedkar urged upon us the virtues of constitutional governance, of the rule of law – and of the vital need for education.
The stress on the moral basis of policy and action, belief in unity and discipline, faith in a synthesis of heritage and science, and promotion of the rule of law and of education – all of it was located in a partnership between citizen and government.

In the year 2022, our country will complete 75 years of Independence. It is our national resolve to attain certain desired milestones for a New India by then.

When we speak of a New India, what do we mean? There are some obvious parameters – like a house for every family, power on demand, better roads and telecom, a modern railway network, rapid and sustained growth.

A compassionate society where the traditionally disadvantaged, whether SCs, STs or OBCs, are part of our national developmental process.
Your immense patience and understanding in the days following demonetisation – and your whole-hearted support in the battle against corruption and black money – reflected a responsible and enlightened society.

The Tokyo Olympics of 2020 offer another opportunity for us to raise our standing in the world’s eyes.

Our soldiers who guard our borders, on a hot day in the desert or high up on a cold mountain, are not just doing their duty. They are displaying an extra degree of selflessness

Our police and paramilitary forces that brave death to combat terrorism or crime and keep us safe are not just doing their duty. They are displaying an extra degree of selflessness

Our farmers who labour under extremely tough conditions to grow food to feed fellow Indians whom they have never met, and who live in the other corner of the country, are not just doing a job. They are displaying an extra degree of selflessness.

I salute those families that gave up their LPG subsidy on the appeal of PM. No law or government order made them do what they did. Their response came from within.

Two thousand five hundred years ago Gautam Buddha said, “अप्पदीपोभव… Be a lamp unto yourself …” If we follow his teachings, acting together, with the passion of our freedom movement, we can collectively be the 125 crore lamps that light up the path to a New India.