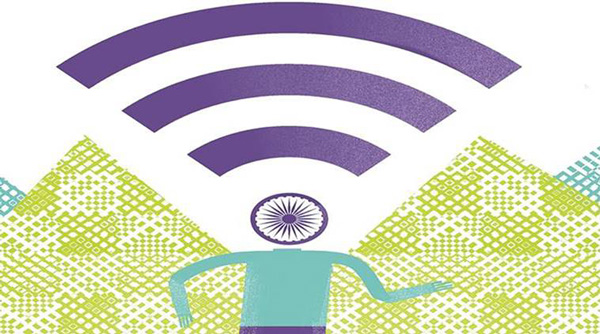 Digital India is a flagship programme of the Narendra Modi government to empower India and Indians using technology. More significantly, it is a transformational initiative incorporating the spirit of “sabka saath” to create a new India by ensuring “sabka vikas”.

The Narendra Modi government has been able to tap the true potential of the Aadhaar platform and use it to transform the lives of the poor, and strengthen digital governance. The use of Aadhaar enables nearly 3 crore e-authentications everyday at no cost. Citizens can get new mobile connections, open bank accounts or avail government services based on Aadhaar-based e-KYC in a paperless manner.

Digital India has been a driver of good governance, epitomising the government’s credo of “Minimum Government, Maximum Governance”. Direct Benefit Transfer (DBT) is an example of that. Former PM Rajiv Gandhi had famously said that of the Rs 100 released by the Centre, only Rs 15 reaches the beneficiary. Welfare schemes had to pass through layers of bureaucracy at the Centre and states, as well as at the district, block and panchayat levels. Their implementation would get delayed by months and involved administrative overheads. The Modi government not only releases Rs 1,000 but ensures that the entire amount reaches the beneficiary’s account instantly. Direct transfers of cooking gas subsidies (PAHAL), ration subsidies — through the public distribution system — MGNREGA wages, scholarships and many other entitlements have ensured transparency and also saved Rs 57,000 crore of public money. DBT has been extended to over 316 schemes of 51 ministries leading to the transfer of Rs 2.16 lakh crore as benefits to the common man in the last three years.

Government eMarketplace (GeM) is another example of this regime’s commitment to removing corruption and ensuring good governance. Savings of around 10 per cent have been observed in the procurements made on GeM. The World Bank is studying India’s innovation in public procurement.
Common Service Centres (CSCs) have been galvanised into becoming agents of rural transformation. About 83,000 CSCs were operational in May 2014. Today such service centres number 2.59 lakh. These CSCs deliver over 300 services. Women, tribal people and Dalits have used CSCs to become digital entrepreneurs, transforming their own lives and the lives of others in the process. These CSC owners have collectively earned over Rs 1,800 crore for the various services they have rendered. The monthly income of several CSC owners is in excess of Rs 1 lakh. Over 10 lakh persons are employed, formally and informally by the CSCs. Digital literacy initiatives are further helping in bridging the digital divide. Under the new Pradhan Mantri Gramin Digital Saksharta Abhiyan (PMGDISHA) programme, another six crore adults are to be made digitally literate in the next two years.
The Rural BPO scheme is another initiative to take the IT industry to smaller towns and cities. More than 19,000 BPO seats have been allocated in 64 towns across 23 states/Union Territories, including four in the Northeast. This will not only uplift the employment ecosystem in small towns but will also help in reducing migration to cities.

India had a very high cash to GDP ratio. Unaccounted cash was one of the main reasons for corruption, black economy, funding of terrorism and Naxalism, electoral malpractices and market distortions. On November 8, 2016 the prime minister delivered a big blow to the black economy by announcing the demonetisation of high value currency notes. The move also gave a huge boost to digital payments.

Such payments bring transparency and accountability in the economy. Prices have fallen and tax collections have risen. India’s unique innovations in the field of digital payments such as BHIM, UPI (Unified Payments Interface), USSD (Unstructured Supplementary Service Data) and Aadhaar Pay have offered affordable digital payment solutions to people. Steep growth has been registered in digital transactions in the last six months.

Soil health cards and e-NAM (e National Agricultural Mandi) are programmes to empower farmers. More than eight crore soil health cards have been issued, helping farmers save crores on their inputs. The e-NAM brings together disparate mandis into a single marketplace. More than 450 mandis and 48 lakh farmers use e-NAM today and 585 mandis across the country are expected to be integrated on the portal by the end of this year.
The online registration system, e-Hospital, has empowered patients in rural India. They can seek appointments in AIIMS and other big hospitals from their villages without having to wait for days in Delhi or other big cities. More than 170 government hospitals have been brought on the digital platform.

The Goods and Services Tax (GST) is one of the biggest financial reforms after Independence. It is a completely digital tax administered through the GST network that is capable of handling 60,000 simultaneous users per second. The network is expected to process 3.5 billion transactions every month.

Rural electrification is happening at an unprecedented pace; this can be easily tracked on the Garv mobile app. More than 14,000 villages have been provided electricity in record time. Efforts to promote renewable energy have, for the first time, made solar power cheaper than coal-based power in India. Coal or wood-based cooking systems were a bane for poor women, causing them serious health problems; treatment costs would aggravate their poverty. The Ujjwala Yojana has provided free LPG cooking gas connections to 2.5 crore BPL families, who now have a clean cooking option.
Loans amounting to Rs 3.55 lakh crore have been provided to Rs 8.17 crore youth under the Mudra scheme. Small and medium entrepreneurs have been given easy institutional credit. To make India a vibrant digital democracy, a unique initiative, MyGov, was undertaken by the government. With over 45 lakh registered users, MyGov is the world’s largest digital platform for citizen’s participation in governance.

The government believes in encouraging innovation and nurturing talent. With nearly 1,000 start-up deals, engaging around 50,000 youth and valued at Rs 50,000 crore a year, India is the world’s third largest start-up hub. More than 80 new mobile manufacturing and component manufacturing units have come up in the past two years. Mobile production has grown from 6.5 crore units to 17.5 crore units in two years and is expected to touch 50 crore units by 2020.

Digital India is one of the biggest government programmes in the world to bring about sustainable and inclusive societal transformation using digital technologies. The process of making India into a trillion-dollar digital economy has begun and Digital India is making this dream a reality. Digital India will surely create a new India.

(The writer is Union minister for Law and Justice, Electronics and IT, GoI)