Prime Minister Narendra Modi and the Union Home and Cooperation Minister Shri Amit Shah participated in the Golden Jubilee celebrations of the North-East Council, in Shillong in Meghalaya on 18 December . On this occasion, many dignitaries including Governor of Meghalya Brig. (Dr) B. D. Mishra, Chief Minister of Meghalya Conrad Sangma and Chief Ministers of other North-Eastern States were present.

Shri Amit Shah said during the tenure of Prime Minister Narendra Modi, the agreement with the NLFT in 2019, the Bru and Bodo Agreement in 2020, and Karbi Agreement in 2021 were agreed upon. The Assam-Meghalaya and Assam-Arunachal border disputes have also almost ended, and due to the restoration of peace, the North-East region has moved on the path of development. The biggest example of this is earlier there used to be a demand to remove AFSPA from the North-East, but now the demand does not arise, rather the Government of India is taking steps and initiatives to remove AFSPA. He said that now 60% area of Assam, seven districts of Nagaland, 15 police stations in six districts of Manipur and Tripura and Meghalaya have become completely AFSPA free, while in only one district in Arunachal AFSPA is yet to be lifted.

Prime Minister Shri Narendra Modi addressed the meeting of North Eastern Council (NEC) in Shillong on 18 December, 2022. The meeting marks the golden jubilee celebration of the North Eastern Council, which was formally inaugurated in 1972.
Hailing the contribution of NEC in the development of the North East region, Prime Minister said that this golden jubilee celebration of the NEC coincides with the ongoing Azadi ka Amrit Mahotsav. Understanding that he often refers to the 8 states of the region as ‘Asht Lakshmi’, he said the government should work on 8 foundation pillars for its development, viz. Peace, Power, Tourism, 5G connectivity, Culture, Natural farming, Sports, Potential. 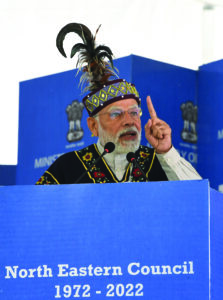 Prime Minister said that the Northeast is our gateway to South -East Asia and can become a centre for development of the entire region. And to realise this potential of the region, work is going on the projects like Indian-Myanmar-Thailand trilateral highway and Agartala-Akhaura rail project.

Prime Minister highlighted that the government has gone beyond the conversion of the ‘Look East’ policy to ‘Act East’, and now its policy is ‘Act Fast for Northeast’ and ‘Act First for Northeast.’ Highlighting the success of peace initiatives in the region, he said that many peace agreements have been signed, inter-state boundary agreements have been done and there has been a marked reduction in instances of extremism.