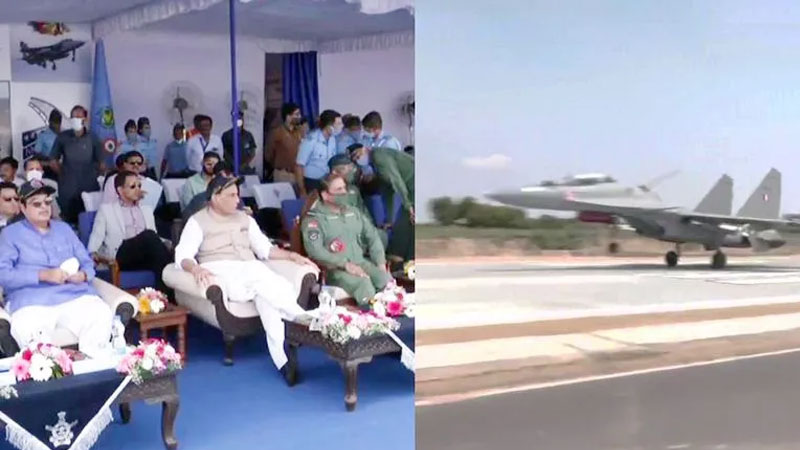 Raksha Mantri Shri Rajnath Singh and Minister for Road Transport and Highways Shri Nitin Gadkari jointly inaugurated Emergency Landing Facility (ELF) for the Indian Air Force (IAF) at Satta-Gandhav stretch on NH-925A near Barmer, Rajasthan on September 09, 2021. They also witnessed aircraft operations on the ELF, which has been constructed in just 19 months by M/S GHV India Pvt. Ltd. under the supervision of IAF and National Highways Authority of India (NHAI). This is the first time that a National Highway has been used for emergency landing of aircraft of Indian Air Force. This landing strip will be able to facilitate landing of all types of IAF aircraft.

In his address, Shri Rajnath Singh lauded the IAF, NHAI & the private sector for joining hands and completing the construction of Emergency Landing Field in 19 months despite COVID-19 restrictions. It is a great example of coordination among multiple departments & Ministries; Government & private sector and Civil & Defence, he added. The Raksha Mantri defined the landing of IAF aircraft on the 3 km stretch as a historic new strength of New India, as it coincides with the 75th year of Independence and 50th year of India’s victory in the 1971 war.

The Raksha Mantri described ELF near the International Border as a shining example of the Government’s commitment to protect the unity and sovereignty of the nation.

Apart from the Emergency Landing Strip, three helipads have been constructed in Kundanpura, Singhania & Bakhasar villages under this project as per the requirements of the Armed Forces.