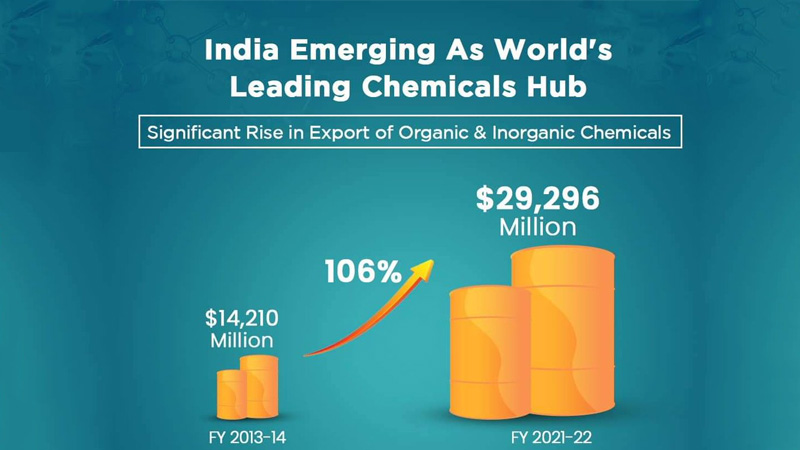 Highlighting the achievement in a Tweet, Union Minister for Commerce and Industry, Consumer Affairs, Food and Public Distribution and Textiles, Shri Piyush Goyal said that the export growth would be a boost to Prime Minister, Shri Narendra Modi’s Aatmanirbhar Bharat Abhiyan.

The export growth of Chemicals has been achieved because of a surge in shipments of Organic, Inorganic Chemicals, Agrochemicals, Dyes and Dye intermediates, Specialty Chemicals.

Today Indian Chemical industry has become global player and earns foreign exchange for the nation with “Make in India” approach. India is the 6th Largest producer of Chemicals in the world and 3rd in Asia. India ranks 14th position in export of chemicals.

Today India leads in Dyes production and contributes to 16%-18% to world’s dyestuff exports. Indian Dye is exported to over 90+ countries. India is 4th largest producer of agrochemicals in the world and manufacturing more than 50% technical grade pesticides.

Almost 50% of agrochemicals are exported from India to the word. India is the largest producer and exporter of castor oil in the world and is responsible for almost 85-90 % of total global exports in this segment.