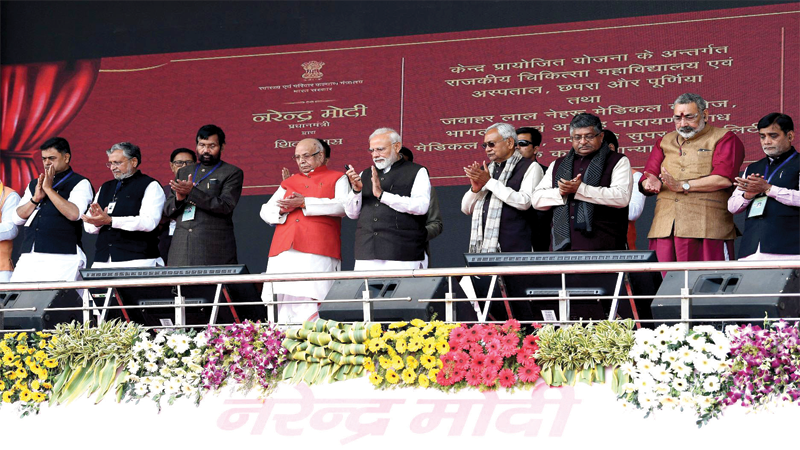 Prime Minister laid the foundation stone of Patna Metro Rail Project at an estimated cost of Rs. 13,365 crores digitally by press of a button. It will have two corridors — Danapur to Mithapur and Patna Railway Station to New ISBT and is likely to be completed in five years. The project will ease the public transport in Patna and adjoining areas. It (Danapur Cantt to Mithapur corridor) will pass through the heart of city and connect densely populated areas Raza Bazar, Secretariat, High Court, Law University Railway Station.

Shri Modi inaugurated the Phulpur to Patna stretch of the Jagdishpur-Varanasi Natural Gas pipeline on this occasion. Citing it as yet another example of his vision that projects for which foundation stone is laid by him are kickstarted by him, PM reminded that he had initiated the project in July 2015. PM said, “It will ensure the supply of gas to the local industries and to the revived Barauni Fertilizer factory besides the start of piped gas supply in Patna. A gas based ecosystem will create employment opportunities for the youth in the area.”

In a reflection of his priorities for the region, PM said, “ Government is committed for the overall development of Eastern India and Bihar.” Under Pradhan Mantri Urja Ganga Yojana, Varanasi, Bhubaneshwar, Cuttack, Patna, Ranchi and Jamshedpur are being connected through gas pipeline. PM inaugurated Patna the Patna City Gas Distribution project which will provide piped gas supply in Ptana city and adjoining areas.

These projects will enhance connectivity, especially in the city of Patna and nearby areas and augment the availability of energy in the city, and the region.

Expressing his commitment to uplift the poor, PM said, “ NDA government’s vision of development is on two lines, infrastructure development and upliftment of the marginalized sections of society who have been struggling to avail basic amenities for over 70 years.”

Unveiling the expansion of health care system in Bihar, he said, “ It is a historic day for Bihar in terms of health care infrastructure development. New Medical Colleges will now be coming up in Chapra and Purnia while Medical colleges in Gaya and Bhagalpur are being upgraded. He added that AIIMS has come up in Patna while work is on to set up another AIIM in the state to meet the healthcare needs of the people.”

Referring to the pain, anger and grief in the country after the terror attack in Pulwama, PM said, “I feel the same fire in my heart that’s burning inside you” PM paid tributes to martyr Constable Sanjay Kumar Sinha from Patna and Ratan Kumar Thakur from Bhagalpur who laid down their lives for the country and said the entire nation stands with the family of martyrs in this hour of grief.

Ammonia-Urea Fertilizer Complex at Barauni foundation stone was laid by PM during this visit..It will boost fertilizer production.

The length of Patna Station to New ISBT corridor is 14.45 km, which is mostly elevated (9.9 km) and partly underground (4.55 km) and comprising of 12 stations (9-Elevated and 3-Underground).

The existing population of 26.23 lakh of Patna agglomeration area is expected to be benefitted by Patna Metro Rail Project directly and indirectly.

The approved corridors will be having Multimodal Integration with Railway Stations &ISBT Station and will have feeder network of Bus, Intermediate Public Transport (IPT) and Non Motorised Transport (NMT). The Project will have non-fare box revenue from rental & advertisement as well asValue Capture Financing (VCF) through mechanism of Transit Oriented Development (TOD) and Transfer of Development Rights (TDK).