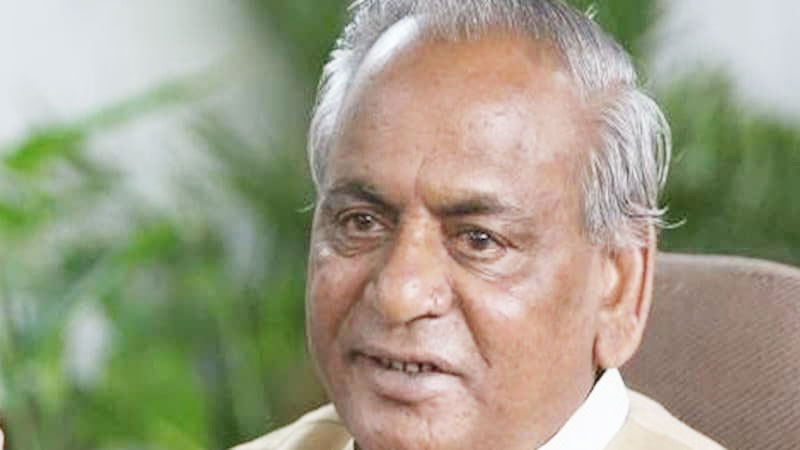 Senior BJP leader and former Chief Minister of Uttar Pradesh Shri Kalyan Singh, who was ailing for some time, breathed his last on 21 August in Lucknow. He was 89 years old. Several leaders across the political spectrum expressed their heartfelt tribute on the demise of Shri Kalyan Singh.

He devoted his entire life for the welfare of people : PM

Prime Minister Shri Narendra Modi expressing his condolence said in a tweet, “I am saddened beyond words. Kalyan Singh Ji…statesman, veteran administrator, grassroots level leader and great human. He leaves behind an indelible contribution towards the development of Uttar Pradesh. Spoke to his son Shri Rajveer Singh and expressed condolences. Om Shanti.” 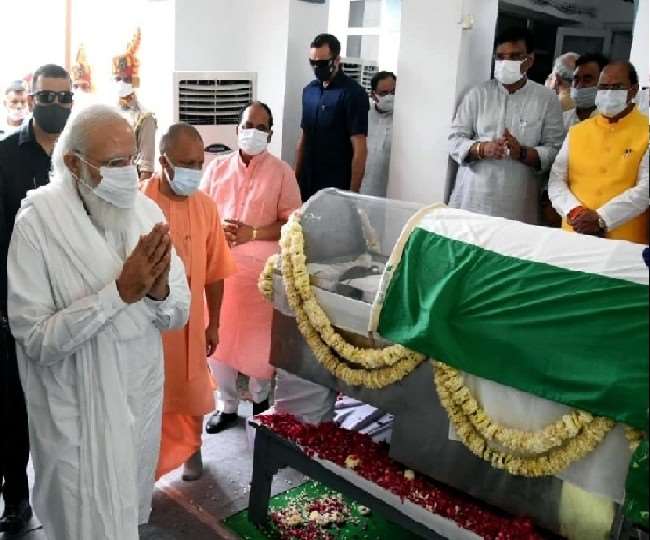 Later on 22nd August, PM Shri Modi reached Lucknow and paid his respects to Shri Kalyan Singh at his residence at Mall Avenue. Talking to press in Lucknow Prime Minister said, “This is a moment of grief for all of us. Kalyan Singh ji’s parents named him Kalyan Singh. He lived his life in such a way that he lived up to the name given by his parents. He devoted his entire life for the welfare of people and he made it the mantra of his life. He dedicated himself to the Bharatiya Janata Party, Bharatiya Jana Sangh, and for a bright future of the country.”

He added, “Kalyan Singh ji’s name had become synonymous with trust across India. He was a committed decision maker and was always striving for the welfare of the people throughout his life. He became an inspiration to others in whatever responsibility he was given, whether as an MLA, or in the government or as a Governor. He became the symbol of faith for the masses. The nation has lost a valued personality and an able leader. We should make efforts to compensate for his loss by following his ideals and fulfilling his dreams. I pray to Lord Rama to bless his soul and give strength to his family to bear this loss. May Lord Rama give strength to all those grieving, and who believe in his values, ideals and the culture and tradition of India.”

He played an important role in strengthening the BJP: JP Nadda

BJP National President Shri Jagat Prakash Nadda in his condolence message said, “I am deeply saddened and shocked to condole the passing away of former Chief Minister of Uttar Pradesh and senior leader of Bharatiya Janata Party Shri Kalyan Singh ji, who played an important role in strengthening the Bharatiya Janata Party and taking the organization to every section of the society. He was such a popular-leader in the true sense who had devoted his whole life for the welfare of the society and upliftment of the poor. 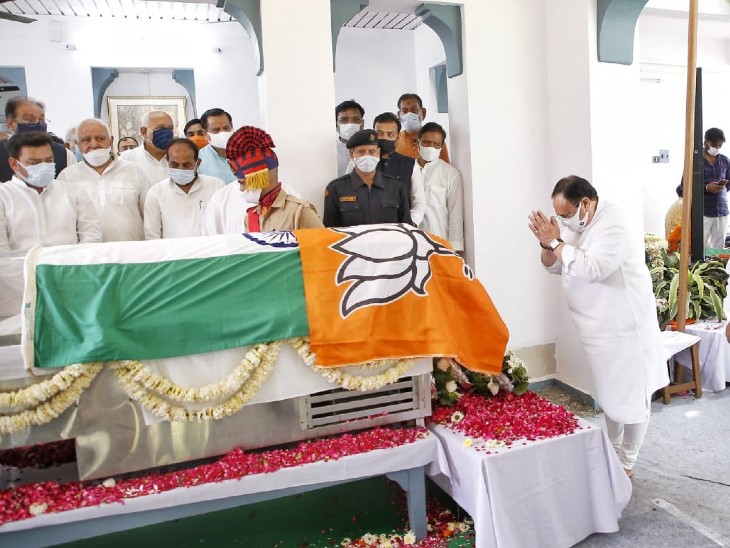 Shri Kalyan Singh ji left an indelible mark in the political and social life with his creativity and service. His entire life was devoted to the service of the masses. He always kept the torch of Bharatiya Janata Party lit, never compromising on the principles and kept fighting for the rights of the oppressed, deprived and backward all his life.

He further said, “Born in a farmer’s family, Shri Singh joined the Rashtriya Swayamsevak Sangh in his childhood. He worked hard in adverse circumstances and got higher education. He was also a teacher. He went from village to village and created awareness among the people and fought for their rights. His death has created a political vacuum not only in Uttar Pradesh but in the entire country which is impossible to fill. The death of Kalyan Singh ji marks the end of an era in Indian politics. The image of “Babu ji” who has trained lakhs of Karyakartas to serve the party will always be etched in our minds and hearts. This is an irreparable loss to the Bharatiya Janata Party. His doors were always open for party workers”.

Shri Nadda added that Shri Kalyan Singh was elected to the Legislative Assembly for the first time in 1967. He was a member of the Uttar Pradesh Legislative Assembly continuously from 1967 to 1980. Meanwhile, during the Emergency, he was also imprisoned for about 21 months. After the end of the Emergency, he became the Health Minister of Uttar Pradesh in 1977. After the formation of the Bharatiya Janata Party, he became the BJP General Secretary of Uttar Pradesh. He was the Chief Minister of Uttar Pradesh twice, from 24 June 1991 to 6 December 1992 and from 21 September 1997 to 12 November 1999. He was the first Chief Minister of the Bharatiya Janata Party in Uttar Pradesh. He also successfully played his role as the Governor of Rajasthan. The prestige he earned in his long political and social life was very high.

The coming generations will always be indebted to Shri Kalyan Singh ji for his invaluable contribution in the cultural upliftment of India. He had immense reverence in the great heritage and traditions of India.

His role in the Shri Ram Janmabhoomi movement was also noteworthy. He made constant efforts for the empowerment of farmers, downtrodden, oppressed, deprived, backward, youth and women, BJP National President said.

In his condolence message, he said, “In this hour of grief, on behalf of myself and party Karyakartas, I express my deepest condolences to the bereaved family of Shri Kalyan Singh ji and his associates. Also, I pay my humble tributes by praying to God to grant peace to the departed soul and patience and courage to the bereaved family. Om Shanti.”

A stalwart of Indian politics and a grassroots leader : LK Advani

BJP senior leader and former Deputy Prime Minister Shri L.K Advani also issued condolence message on demise of the leader. He said in a press statement, “I am deeply saddened to condole the passing away of my close associate Kalyan Singh ji, former Chief Minister of Uttar Pradesh.

A stalwart of Indian politics and a grassroots leader, Kalyan Singh ji became the Chief Minister of the first ever BJP government of Uttar Pradesh. He endeared himself to the masses by working tirelessly for the upliftment of the weaker sections and contributed greatly to the overall progress of the state.”

He dedicated his life to the nation : Amit Shah

Union Home Minister Shri Amit Shah said Shri Singh had dedicated his life to the nation. Shri Shah said, “The country and the entire BJP family are mourning his death. This nation and future generations will always be indebted for his immense contribution,” he said. The Union Home Minister also said Shri Kalyan Singh ji was one of the tallest leaders of the Ram Temple movement. He quit power for the Ram Janmbhoomi Andolan without even thinking once. When the foundation stone for the grand Ram Temple was laid in Ayodhya I had spoken to Respected Babuji. He had said with enthusiasm, joy and satisfaction that with the foundation stone laying for the grand Ram Temple in Ayodhya his life’s biggest goal, his life’s greatest wish has been achieved.

Describing Kalyan Singh as a stalwart of Indian politics, Union Defence Minister Shri Rajnath Singh said with his demise, he has lost his elder brother and a companion. “Kalyan Singh’s death is a great loss for Indian politics and a very sad moment for me,” he said in a tweet.

He was synonymous with purity, transparency and public service: Yogi Adityanath

“In Indian politics, he was synonymous with purity, transparency and public service. The death of such a respected organizer and popular mass leader Kalyan Singh ji is an irreparable loss for the entire nation,” Yogi Adityanath said in a tweet.
The last rites of former Uttar Pradesh Chief Minister Shri Kalyan Singh was performed on 23rd August on the bank of Ganga in Narora of Bulandshahr district with full state honours. It was attended by Union Home Minister Shri Amit Shah,UP Chief Minister Shri Yogi Adityanath, BJP State President Shri Swatantra Dev Singh and several senior leaders of the State and the country. UP Chief Minister Yogi Adityanath announced a three-day state mourning to condole the leader.