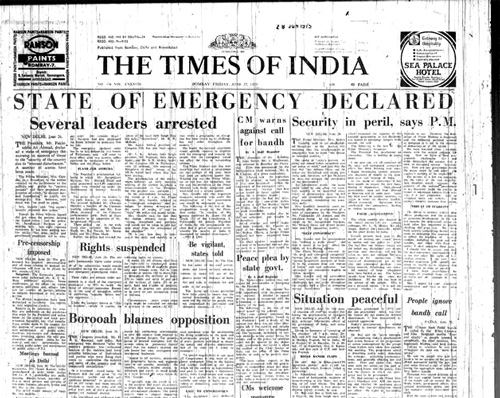 It has become customary for the critics of any Government in India to casually use an expression “Undeclared Emergency”. Those making these exaggerated comments need to introspect their own roles during the Emergency. Most of them were either supporting the Emergency or were absent in any protest against the Emergency.

Emergency was an assault on all democratic institutions. It not only established the dictatorship of an individual, it created an environment of tyranny and fear in the society. Most institutions collapsed on their own. The Emergency was declared on the midnight of 25th – 26th June, 1975. The ostensible and the official reason was a threat to public order but obviously this was a phoney reasoning. The real reason was that Mrs. Indira Gandhi had been unseated in an election petition by the Allahabad High Court and the Supreme Court had granted only a conditional stay of the High Court order. She wanted to continue in power and resorted to imposition of Emergency to enable this to happen. It would be in the fitness of things to remind those who loosely use a phrase “Undeclared Emergency” with what happened during that period. 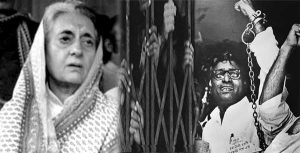 The first Act after the imposition of the Emergency was the detention of the political opposition under the Preventive Detention Law. District Magistrates and Collectors were handed over blank detention forms to enable them detain thousands of leaders and workers of the political opposition. Just the name, father’s name and address of each detainee was filled in hand. No grounds of detention existed in any case. Police stations were advised to register identical FIRs arresting ordinary political workers under the Defence of India Rules after alleging that they were either members of banned organisation or were threatening to overthrow the Government. Nine High Courts in the country held that the detention order were justiciable and in the absence of the grounds of detention the same could be quashed. The Supreme Court decided otherwise.

In preparation for the Emergency, the Supreme Court had already been packed with pliable judges. Three seniormost judges of the Supreme Court were superseded and those believing in the social philosophy of the Government were in control of the court. The Supreme Court held that an illegally detained detainee had no judicial recourse during the Emergency. Justice H.R. Khanna was the only dissenting judge. Pre-censorship was imposed on the entire news media. Not a word could be published in the newspaper without going through the censor. An officer of the censor stayed in the premises of every major newspaper. The entire activities of the opposition were blacked out and the media contained only governmental propaganda. Many of those who now complain of an “Undeclared Emergency” were either active or reluctant supporters of the emergency regime.

Both the Constitution of India and the provisions of the Representation of the People Act were retrospectively amended so that each ground on which Mrs. Indira Gandhi’s election had been set aside could be statutorily reversed. The pliable Supreme Court upheld the retrospective amendments to the provision of the Representation of the People Act by upholding the power of Parliament to amend any law retrospectively. The opposition members of both the Houses of Parliament stood detained. The numerical strength of Parliament was reduced. This gave to the Government an opportunity to amend the Constitution through a procured two-third majority in Parliament. A Parliament elected for a period of five years extended its own life beyond five years by amending the Constitution. Opposition Governments in some States were dismissed and India witnessed virtually a single individual rule. All ingredients of an absolute dictatorship existed. There was no personal liberty, no press freedom, the Parliament became a farce, the highest Court became subservient to the dictatorship and there was no room for dissent.

This now was an ideal opportunity for the dictator to perpetuate her family and, therefore, the younger son of the Prime Minister, Mr. Sanjay Gandhi, was proclaimed as the de facto successor. The country witnessed forced sterilization, mass scale uprooting of the poor including the minorities from their homes and misuse of the mass media.

An era of sycophancy always suffers from a dichotomy. A dictatorial regime is often misled by its own propaganda. It becomes consumer of its own propaganda with nobody else believing it. It misled itself to believe that the people were in support of the dictatorship. It, therefore, committed the ultimate error of ordering an election which witnessed a rebellion against the Emergency regime.

Today I wonder if those who routinely use the expression “Undeclared Emergency” introspect and ask themselves a question “where was I during those nineteen months and what was my publicly declared stand at that time?”