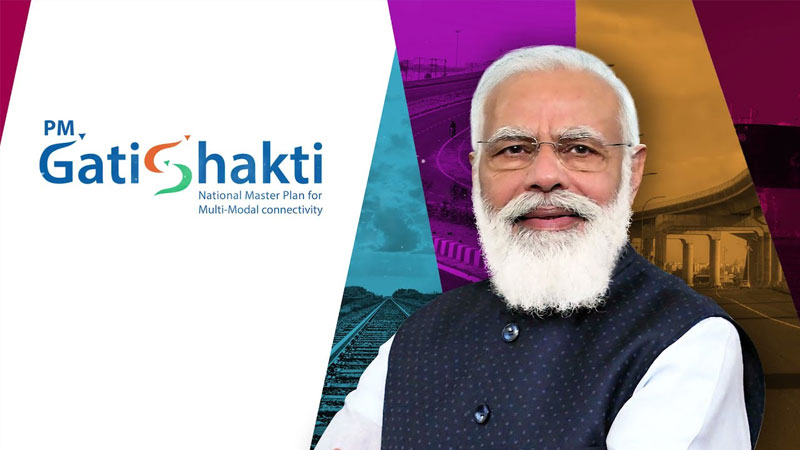 What is Gati Shakti ?

Gati Shakti-National Master Plan for Multi-modal Connvectivity launched by Prime Minister Shri Narendra Modi on 13 October in new Delhi to expedite the infrastructure connectivity in the country. For fast implementation of infrastructure project, Gati shakti through digital platform will coordinate between different government departments. The platform will coordinate 16 Ministries including Railways and Roadways together for integrated planning and coordinated implementation of infrastructure connectivity projects. It will incorporate the infrastructure schemes of various Ministries and State Governments like Bharatmala, Sagarmala, inland waterways, dry/land ports, UDAN etc. Infrastructure is key to the growth.

The Prime Minister noted that it is imperative that governance in India becomes more efficient and responsive. Earlier, towards this direction Prime Minister of India, Shri Narendra Modi started his ambitious multi-purpose and multi-modal platform PRAGATI (Pro-Active Governance And Timely Implementation). With this, PM monitors and review progress of important programmes and projects of the Government of India as well as projects flagged by State Governments. It is a three-tier system -PMO, Union Government Secretaries, and Chief Secretaries of the States. It also speeds up the execution of the projects.

According to CEO of Niti Ayog Amitabh Kant, Roads dominate the share of traffic. 64% of the freight in India is moved through roads. As diesel drives road transport, any spike in oil prices raise prices across the board, through higher transport costs and also because fuel is not part of GST, which means input tax credit is not available. Even post GST, FastTag and other initiatives, it is desirable to aspire for a higher share of railway in modal share as it remains a more efficient method. Furthermore, while many economic zones, industrial parks, logistics hubs and ports were planned, they often suffered owing to inefficient multi-modal connectivity, and also due to their small size. The fragmented nature of decision making, with each department working in silos meant that a disjointed industrial network was created. While several pieces of the puzzle were in place, many remained unconnected as well. A lack of scale in manufacturing and an inefficient logistics network hampered our global competitiveness.

How will Gati Shakti break the silos of departmentalism ?

Amitabh Kant states, Achieving an efficient, seamless multi-modal transport network is no easy task. It requires independent government departments to work in close coordination and collaboration, guided by an overarching master plan. The Prime Minister during his Independence Day speech of 2021 had emphasised that the National Master Plan, GatiShakti would help realize the dreams of crores of our countrymen. The GatiShakti programme marks a paradigm shift in decision making to break the silos of departmentalism. In the proposed Plan, all the existing and proposed economic zones have been mapped along with the multimodal connectivity infrastructure in a single platform. Individual projects of different line Ministries would be examined and sanctioned in future within the parameters of the overall Plan, leading to synchronisation of efforts. GatiShakti will bring synergy to create a world class, seamless multi-modal transport network in India. The National Master Plan will employ modern technology and the latest IT tools for coordinated planning of infrastructure. A GIS-based Enterprise Resource Planning system with 200+ layers for evidence-based decision-making is one example. The use of satellite imagery for monitoring is another. Digitisation will play a big role in ensuring timely clearances and flagging potential issues, and in project monitoring as well.

How will it be helpful in reducing logistic cost?


According to mint analysis,India’s logistics costs are very high, at around 13% of its gross domestic product (GDP)—it makes most industries in India less competitive internationally. Smoother transportation  will  reduce  logistics  costs  and make exports more competitive. Farmers also lose out on opportunities to export  due to weak transport linkages. Seamless last-mile connectivity will greatly help.

Gati Shakti in a nutshell

Gati Shakti will give gati (speed) to all developmental projects in the country. It will be helpful to achieve the target set by the Modi government to complete 16,000 km of gas pipelines across the country in the next five to six years. However,till 2014 15,000 km of pipelines were built in 27 years.In the past seven years, more than 9,000 km of railway lines have been doubled, compared to 1,900 km of doubling of tracks in five years before 2014.