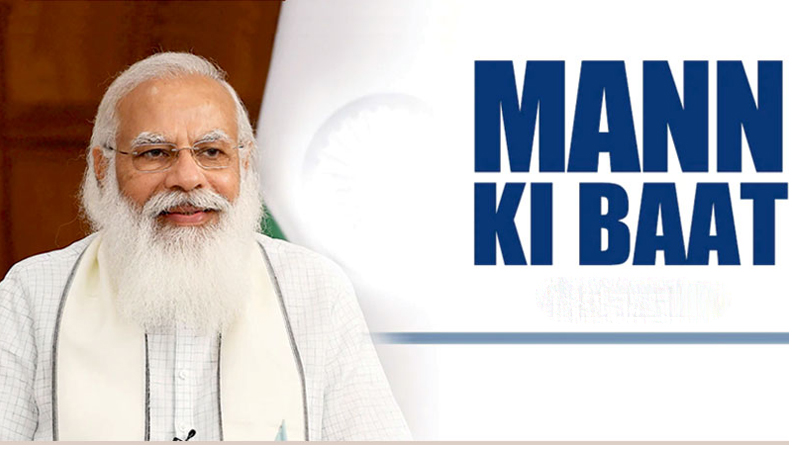 On December 26, Prime Minister Narendra Modi shared his thoughts with the people in the country and abroad in his ‘Mann Ki Baat’ programme on All India Radio. It was the 84th episode of ‘Mann Ki Baat,’ the monthly radio programme. In this episode, Shri Modi said there is a growing interest in the world in knowing about Indian culture. He added that people from different countries are not only curious to know about our culture but are also helping to spread it. We are giving highlights of the episode for our esteemed readers:

• This is the strength of the people; it is because of everyone’s effort that India could fight the biggest pandemic in a 100 years. We stood by each other like a family in every difficult moment. To help someone in one’s locality or city… everyone tried to do more than what one could have done. If we compare the vaccination figures of the world today with those of India, it feels that the country has handled such an unprecedented task… how big a goal has been achieved. Crossing the 140 million vaccine dose mark is an achievement of each and every Indian. This shows the trust of every Indian in the system; shows trust in science and in scientists; and is also a testament to the willpower of we Indians who are fulfilling our responsibilities towards the society.

There is a growing interest in the world to know about Indian culture. People from different countries are not only curious to know about our culture but are also helping to spread it

• My dear countrymen, during the battle of Mahabharata, Bhagwan Shri Krishna expressed to Arjuna – ‘ Nabhah Sprisham Deeptam ‘ i.e. touch the sky with pride. This is also the motto of the Indian Air Force. Many lives engaged in the service of Maa Bharati soar over these heights of the sky with pride every day; they teach us a lot. Such was the life of Group Captain Varun Singh. Varun Singh was flying the helicopter that fell prey to a mishap this month in Tamil Nadu. In that accident, we lost the country’s first CDS, General Bipin Rawat and his wife along with many brave hearts. Varun Singh also fought death bravely for many days, but then he also left us. When Varun was in the hospital, I saw something on social media that touched my heart. He was given Shaurya Chakra in August just this year. After this honor, he had written a letter to the principal of his school. After reading this letter, the first thought that came to my mind was that even after reaching the pinnacle of success, he did not forget to nurture his roots. Second – that when he had time to celebrate, he showed concern for the generations to come. He wanted that the lives of the students of the school that he studied in should also be a celebration. In his letter, Varun Singh ji did not boast of his valour; instead he referred to his failures. He talked about how he converted his shortcomings into abilities. At one place in this letter he has written – “ It is ok to be mediocre. Not everyone will excel at school and not everyone will be able to score in the 90s. If you do, it is an amazing achievement and must be applauded. However, if you don’t, do not think that you are meant to be mediocre. Whatever you work towards, be dedicated, do your best. Never go to bed, thinking, I could have put-in more efforts.

• Friends, the mantra he has given to rise from average to extraordinary is equally important. In this letter Varun Singh has written –
“Never lose hope. Never think that you cannot be good at what you want to be. It will not come easy, it will take sacrifice of time and comfort. I was mediocre, and today, I have reached difficult milestones in my career.”

• Varun had written that if he could inspire even a single student , it would be a lot. But today I would like to say – he has inspired the whole country. Even though his letter talks only to the students , he has given a message to our entire society.

• Friends, today there is a growing interest in the world to know about Indian culture. People from different countries are not only curious to know about our culture but are also helping to spread it. One such person is Serbian Scholar Dr.Momir Nikich. He has compiled a Bilingual Sanskrit-Serbian Dictionary. More than 70 thousand Sanskrit words included in this dictionary have been translated into Serbian language. You would be delighted to know that Dr.Nikich has learned Sanskrit language at the age of 70. He tells that he got his inspiration from reading the articles of Mahatma Gandhi. A similar example is that of 93 (Ninety-three) year old Professor J. Gendedharam of Mongolia. In the last 4 decades, he has translated about 40 ancient texts, epics and compositions of India into Mongolian language.