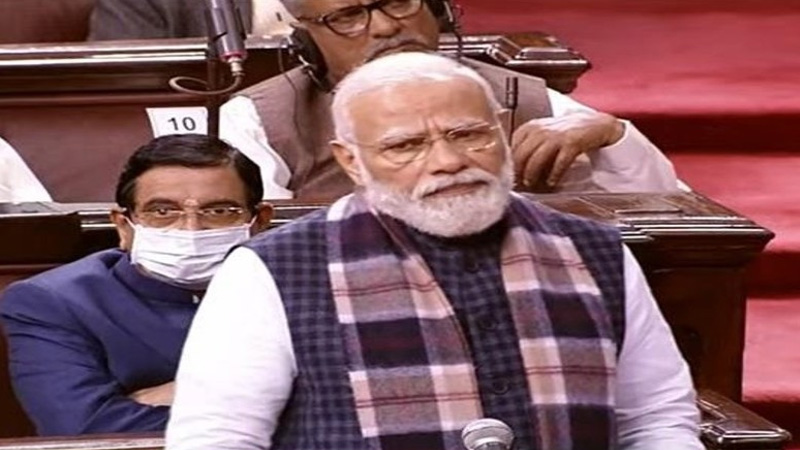 The Prime Minister, Shri Narendra Modi, on 8 February replied to the motion of thanks on the President’s address to Parliament, in the Rajya Sabha. The Prime Minister said “This is a very important time to think, where to take the nation and how to take the nation ahead, when it celebrates 100 years of Independence.” He also believed that in order to complete the resolution for this we will need collective partnership and collective ownership.

“India ensured 80 crore citizens get access to free ration. It was also ensured that record houses for the poor are built, these houses are equipped with water connections. ”

The Prime Minister said that the world is still battling COVID-19. Humanity has not seen any challenge like this in the last hundred years. The people of India have taken the vaccine and they have done this not merely to protect themselves but also protect others. Such conduct, in the midst of so many global anti-vaccine movements is admirable.

The Prime Minister said that people kept raising questions about India’s progress in this time of the pandemic but India ensured 80 crore citizens get access to free ration. It was also ensured that record houses for the poor are built, these houses are equipped with water connections. During this pandemic we have provided water through taps to 5 crore people and created a new record. Because of our rational approach our farmers produced bumper harvests during the pandemic. We completed many infrastructure related projects during the pandemic because we believe that they ensure jobs during such challenging times. During this pandemic, our youth have made huge strides in Sports and brought glory to the nation. Indian youth with their start-ups have made India become one of the top three start-ups destination in the world.

The Prime Minister underlined that during this pandemic whether it is a COP 26 or G20 related matter or whether it is related to export of medicine in more than 150 countries, India has played a leadership role and the whole world is discussing this. The Prime Minister emphasized that we focussed more on the MSME sector and agriculture sector during the pandemic.

While giving data on employment, the Prime Minister said that in the year of 2021 EPFO payroll data shows that around 1 crore 20 lakh new people have enrolled themselves on the EPFO portal. These all are formal jobs and out of these around 60 to 65 lakh are aged between 18 and 25, it means it is their first job. While speaking on the inflation, the Prime Minister said that we have tried our best to check the inflation and when we compare this with other economies then we can say that today India is the only big economy which is experiencing high growth with medium inflation.

The Prime Minister said that we have to work for people irrespective of which side of the aisle we are on. The mindset that being in the Opposition means stop working towards solving people’s issues is wrong. The Prime Minister said that he felt astonished when some honourable Members said that India’s vaccination drive is no big deal. He said that from the beginning of the pandemic the government has made every effort to mobilize every resource available in the country and the world. He also assured everyone that till the pandemic exists, we will protect the poor of the nation.

The Prime Minister said that fighting COVID-19 is also linked to a strong and cordial federal structure. There have been 23 meetings with respected Chief Ministers on the issue. He expressed grief over the boycott of the opposition parties to attend the all-party meeting on the COVID-19 issue.

The Prime Minister said that today more than 80 thousand health and wellness centers are functioning in the country under Ayushman Bharat. These centers are providing better primary healthcare facilities including free tests near the village and home.

While speaking on democracy, the Prime Minister said that we will never learn lessons in democracy from those who trampled over democracy in 1975. The biggest threat to our democracy is dynastic parties. When one family gets too prevalent in a political party, political talent suffers.

The Prime Minister said “some Members asked- if there was no Congress, what would happen?” “I would like to say, if there was no Congress there would be no Emergency, there would be no caste politics, Sikhs would never have been massacred, the problems of Kashmiri Pandits would not have happened,” he said.
The Prime Minister reiterates that we do not see any conflicts between national progress and regional aspirations. India’s progress will be stronger when it addresses regional aspirations keeping in mind the development of the country. When our states progress, the country progresses, he added.

The Prime Minister concluded his speech by saying that we should end the tradition of differentiation and to walk together with the same mindset is the need of time. A golden period and the whole world is looking forward to India with a hope and we should not lose this opportunity.