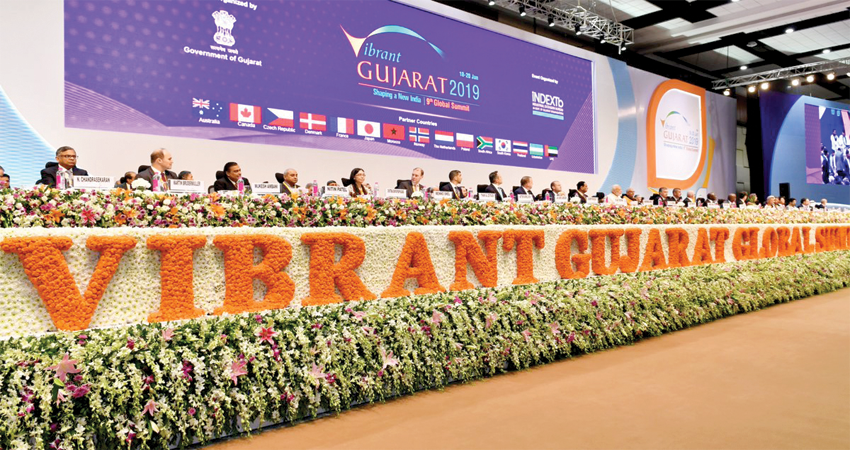 The Prime Minister invited global business leaders and companies to come and invest in India where the business climate is more investor friendly now with the required infrastructure and facilities in place. PM said, “India is now ready for business. In the last four years, we have jumped 65 places of global ranking of ease of doing business. I have asked my team to work harder to ensure India is on the top 50 next years.”

Mr. Modi said that International Institutions like the World Bank, IMF and Moody’s have shown confidence on India’s economy and the reforms taken in recent times. He added, “We have also made Doing Business cheaper. The implementation of GST and other measures of simplification of taxes have reduced transaction costs and made processes efficient. We have also made Doing Business Faster through digital processes and single point interfaces.”

Underlining the importance of India’s growth and its strong economic fundamentals, the Prime Minister said, “At 7.3 per cent, the average GDP growth has been the highest of any Indian government since 1991. At the same time, the average rate of inflation at 4.6 per cent is the lowest for any Indian government since 1991 when India began its process for liberalization.” 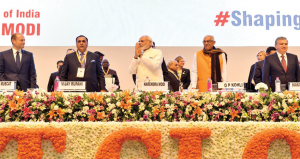 He told the gathering that those, “who visit India regularly will feel a change in air, in terms of direction and intensity. Over the last four years, the aim of my government is to reduce government and increase governance. We wish to take deeper structural reforms to strengthen our economy. We continue to remain one of the fastest growing economies in the world,”
Prime Minister said that India has now one of the largest ecosystems in terms of start-ups and with its world-class research facilities provides the right kind of atmosphere for investment. He added that, “We have worked hard to promote manufacturing to create jobs for our youth. Investments through our ‘Make in India’ initiative, have been well supported by programmes like ‘Digital India’ and ‘Skill India’ “

The PM added, “We were among the highest growing tourist destinations in the world in 2017. India had a growth of 14 percent over 2016, while the world grew at an average of 7 percent in the same year. We have also been the fastest growing aviation market in the world, with double-digit growth in passenger ticketing terms, for over four years”. He summed it up saying “India is thus, a land of immense opportunities.

It is the only place which offers you Democracy, Demography and Demand”.

About Vibrant Gujarat Summit, he said, “It has now emerged as a global platform and presence of so many leaders shows that international cooperation is no longer limited to national capitals but is also extended to state capitals,”
Gujarat CM , Vijay Rupani lauded PM Modi for his policy driven governance and visionary leadership and assured the captains of industry all possible support to facilitate easy business.

Five Heads of States who graced the occasion were the President of Uzbekistan, Shavkat Mirziyoyev along with the Prime Ministers of Denmark, Lars Løkke Rasmussen; Czech Republic, Andrej Babis & Malta, Dr Joseph Muscat.

One of the highlights of the Vibrant Gujarat Summit-2019 was a special message by the Israel PM Benjamin Netanyahu via video-conferencing who said, “Gujarat symbolises the powerful connection between our two people. Together we’re building limitless possibilities for the future.”

Major events during the three-day meet include a Round-table interaction with the heads of global funds, ‘Africa Day’, MSME convention, Roundtable for Opportunities in Science, Technology, Engineering and Mathematics (STEM) Education & Research. In addition, Exhibition on Futuristic Technologies and Space Exploration, Seminar on Port Led Development & Strategies to establish India as the Trans-shipment Hub of Asia and On Make in India to showcase the Success Stories of Make in India & key interventions by the Government have been organized.

First edition of Vibrant Gujarat Summit was held in 2003 under the guidance of Prime Minister Narendra Modi who was then the Chief Minister of Gujarat, to give a spur to the investments in Gujarat. Since then it has played the role of a catalyst leading to several other such summits annually in states across the country.

During this period, bilateral interactions of PM with the visiting President of Uzbekistan Shavkat Mirziyoyev, Prime Minister of Czech Republic Mr. Andrej Babis, Prime Minister of Malta Dr. Joseph Muscat and Prime Minister of Denmark Mr Lars Løkke Rasmussen ware in the limelight on 18 January 2019. It was followed by 3D laser projection show at Dandi Kutir in Gandhinagar, Gujarat. Captains of industry announced a series of investment projects to mark the Vibrant Gujarat Summit.