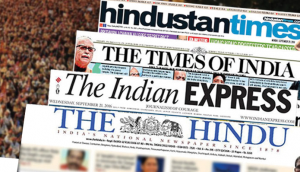 The Times of India

The Times of India said, ‘RAM MANDIR WITHIN SITE’, in its article on the landmark Supreme Court verdict. “SC settles, by unanimous verdict, Centuries-old Hindu-Muslim conflict by granting entire 2.77-acre disputed land to deity Ram Lalla, one of the 3 claimants in the case; Directs Centre to appoint trust in 3 months to manage construction of temple,” the TOI front page read.

The Hindustan Times ran the headline, ‘TEMPLE SET IN STONE’. “FOR RAM LALLA Right of child deity upheld, paving the way for a Ram temple at disputed site”, HT read.

The Hindu ran, ‘Temple at disputed site, mosque within Ayodhya, rules SC’, as its headline…..

Mumbai-based, The Indian Express said, ‘Temple gets site, mosque a plot’, and ran ‘CONSTITUTION BENCH DIRECTS CENTRE TO FORMULATE A SCHEME WITHIN 3 MONTHS FOR TEMPLE’, as its kicker.

Kolkata-based newspaper The Telegraph said, ‘IN THE NAME OF RAM, THE SITE IS NOW A HINDU STHAN’ as its headline. “The Supreme Court has unanimously awarded the disputed site in Ayodhya to Ram Lalla Virajman (baby Ram) and empowered the Centre to build a temple the report read…..