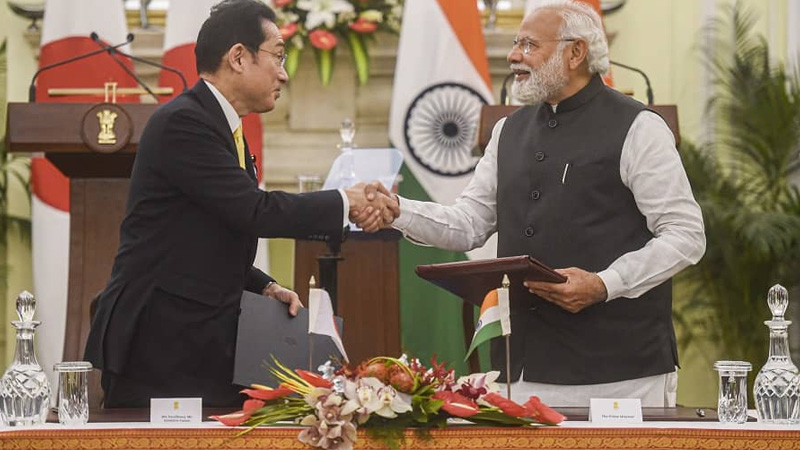 Prime Minister of Japan Mr. Kishida Fumio made an official visit to India, as his first bilateral visit, from 19 to 20 March, 2022 for the 14th India-Japan Annual Summit with Prime Minister of India Shri Narendra Modi. Both the Prime Ministers recognized that the Summit was taking place at a significant time as the two countries were celebrating the 70th anniversary of establishment of diplomatic relations and India was celebrating the 75th anniversary of its independence. They reviewed the developments since the last Annual Summit and discussed wide ranging areas of cooperation.

During this visit, the two leaders had substantive discussions and outcomes that were commensurate with the breadth and depth of India’s engagement with Japan. On the bilateral front, the two Prime Ministers discussed a wide range of issues, including economic cooperation, cooperation for the development of India’s North-Eastern region, digital cooperation, and skills development, which is a particular focus. The Prime Ministers also had detailed discussions on regional and global issues as two major powers in the Indo Pacific region. Both leaders agreed that our defence and security ties have grown stronger in recent years, and we are more comfortable engaging with each other and other like-minded partners in various regional and multilateral fora to achieve our common goals.

• The first of which is a Cybersecurity Cooperation Memorandum. This is an umbrella agreement for cybersecurity information sharing, capacity building programmes, and collaboration.
• The second was a Memorandum of Understanding on Sustainable Urban Development. This agreement, the Memorandum of Understanding, was signed in 2007 and includes new areas of cooperation. Smart Cities development, affordable housing, urban flood management, sewerage management, and intelligent transportation management systems are among the new areas.
• The third document was a Memorandum of Cooperation on Waste Water Management. And this is a new technology that the Japanese have introduced, known as the Johkasou technology, which is primarily used in areas where sewage, or sewage infrastructure, has been installed.Seven loan agreements for Official Development Assistance were concluded. These are in areas of connectivity, healthcare, water supply and sewerage. And the total worth of this overseas development assistance is around Rupees 20,400 crores for the period 2021-22. So they are quite significant from the areas they cover, and also the quantum involved.

Both Prime Minister Shri Narendra Modi and Mr. Kishida Fumio set an enhanced investment target of 5 trillion Japanese Yen as public and private investment in India, from Japan over the next five years. It was in 2014, when Prime Minister Shri Modi visited Japan that the two Prime Ministers then had set a target of three and a half trillion Yen and that target has been surpassed and the two leaders have decided to go in for that this enhanced target is really a measure of the performance in terms of the incoming investments by Japan in India, and is also a sign of the level of cooperation in the economic domain that the two countries enjoy.

An agreement was also signed for the setting up of an electric vehicles plant and battery manufacturing plant in Gujarat by Maruti Suzuki. Another agreement was signed on vehicle scrapping between Gujarat government and Maruti Suzuki Toyotsu. The total quantum of investment involved is around 10,400 crores. The auto sector is one of the vibrant areas of economic cooperation between India and Japan. Skill development is an important focus of the two countries. Japanese companies have established some Japan-India Institutes of management for skilling of Indian workers. We have established so far 19 of such Institutes, but the 20th Japan-India Institute of Management will also be opened in Gujarat by Maruti Suzuki. It augurs well for capacity development of our skilled workers and our cooperation in the manufacturing sector.

PM’s REMARKS AT JOINT PRESS MEET
Japan is one of the largest investors in India: PM Modi

Japan is one of the largest investors in India. India and Japan are working as ‘One team- One project’ on Mumbai-Ahmedabad high-speed rail corridor and Japan will invest 5 trillion Yen or Rs. 3.2 lakh crores in the next five years in India, PM Shri Modi remarked.