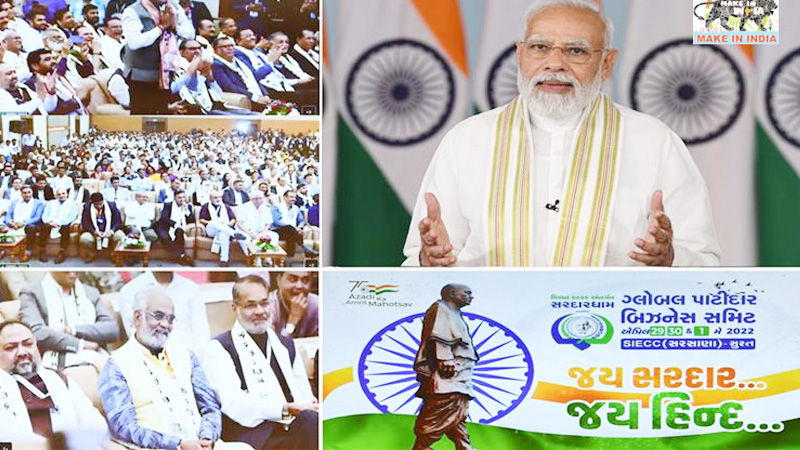 Prime Minister Shri Narendra Modi inaugurated the Global Patidar Business Summit (GPBS), being organized by Sardardham on 29 April via video conferencing. The Chief Minister of Gujarat, Shri Bhupendrabhai Patel and Union Ministers and industrial leaders were among those present on the occasion.

Speaking on the occasion, the Prime Minister noted the status of city of Surat as one of the fastest growing cities of the world. Recalling Sardar Patel’s words, the Prime Minister said Today India has so much. “We just have to strengthen our self-confidence, our spirit of Aatmnirbharta. This confidence will come only when there is participation of everyone in development, everyone’s effort will be involved”
On the enhancement of the spirit of entrepreneurship in the country, he said that It is the constant effort of the government through its policies and its action such an environment should be created in the country that even the youth of ordinary families become an entrepreneur, dream and take pride in entrepreneurship. The Prime Minister said that schemes like Mudra Yojna are giving strength to those people to get into business who never dreamed about doing so. Similarly, Start Up India is helping in realization of innovation, talent and dreams of Unicorn which appeared inaccessible earlier. Production Linked Incentive, said the Prime Minister, is infusing new energy in the traditional sectors and creating new possibilities in new sectors. Despite the challenges of pandemic, he informed, the MSME sector of the country advanced rapidly. With massive financial support lakhs of employment in the sector were protected and now this sector is creating many news avenues of employment. PM-SVANIDHI scheme has associated street vendors in the growth story by giving them access to formal banking and finance. The scheme has been extended till December 2024 recently, he informed.

The Prime Minister said that every small and big business is contributing to the national progress and this spirit of Sabka Prayas is becoming strength of the New India in the Amrit Kaal. He expressed happiness that the Summit this year is discussing this aspect in detail.

Shifting to Gujarati the Prime Minister asked the community to create groups consisting of both experienced and young members to work on issues of national interest and document ideas, global good practices and government policies and their analysis can also be undertaken. He said subjects like fintech, skill development, financial inclusion etc can be taken for suggesting intervention in government and in academia. Similarly, National Education Policy can be taken up for exploration of best way of total implementation and suggesting useful intervention at every level.

Shri Modi called for a new outlook towards financial empires. He emphasized that it may be decided that industries can be based in small cities instead of big cities. He gave example of Jyotirgram Yojna which triggered industrial activities in villages. Now such work can be done for small town and cities, he said.

Sardardham is organizing GPBS under ‘Mission 2026’ to provide an impetus to socio-economic development of Patidar community.