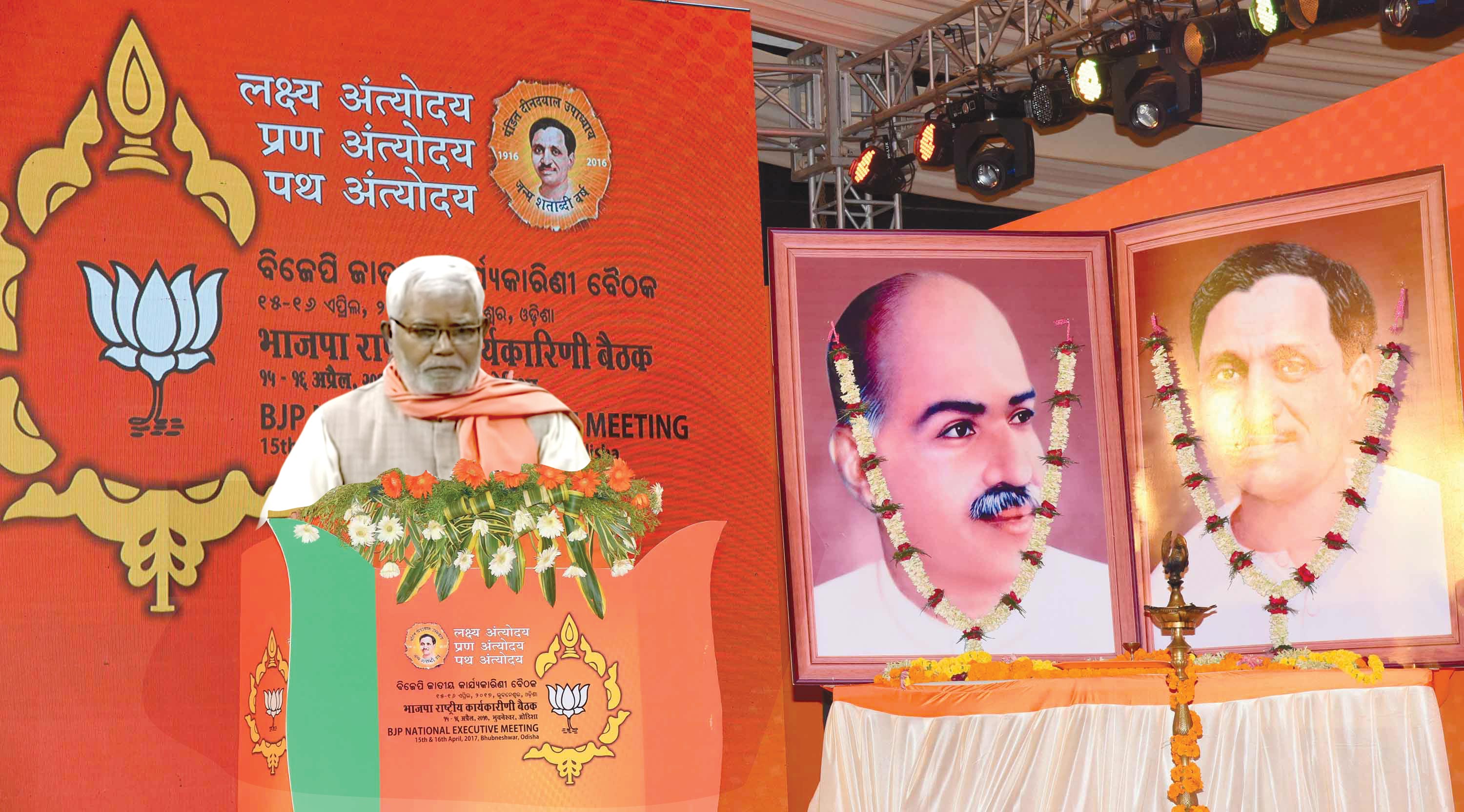 The Resolution 02 was moved by Member of Parliament Shri Hukumdev Narayan Yadav at the BJP National Executive meeting held in Bhubaneswar, Odisha on 16 April, 2017. This resolution was seconded by Jharkhand Chief Minister Shri Raghubar Das. The Resolution 02 sincerely welcomed and appreciated the decision of Prime Minister Shri Narendra Modi to award Constitutional status to the National Commission for Socially and Educationally Backward Classes. We are publishing the full text of the Resolution 02 for our esteemed readers:

In his first address in the Lok Sabha, Prime Minister Shri Narendra Modi underlining the goals of the Bharatiya Janata Party-led Government said, “ We are the people who have grown up with the ideals of Pandit Deen Dayal ji Upadhyaya. He has taught us the principles of ‘Antyodya’. We should empower the poor of this country to fight against the poverty. All the systems of governance should be used to empower and strengthen the poor and all these efforts should lead to that goal of benefitting the people who are sitting at the bottom of the society. We have to work in this direction, only then we will be able to provide any welfare to our society.” Our honorable Prime Minister has made sincere and concerted efforts in this direction in last three years. The Bharatiya Janata Party sincerely welcomes and appreciates the decision of Prime Minister Shri Narendra Modi to award Constitutional status to the National Commission for Socially and Educationally Backward Classes. It is after 70 years of India’s independence, a government has taken this historic decision aimed at fulfilling the interests of the poor who have been living in remote areas without any basic facilities. It is indeed a very important step forward that will help improve the living conditions of the poor and bring them in the mainstream. This is fulfillment of the long pending demand of providing social justice to the backward classes of our society.

Advantages of this historic step: This historic decion taken by the Central government will go a long way in ensuring delivery of justice to all sections of our society. With the award of Constitutional status to National Commission for Socially and Educationally Backward Classes it will become as powerful as National Commission for Schedule Castes and National Commission for Schedule Tribes. Till date the NCBC was a simple legal body, whose job is to advise the government regarding inclusion or removal of caste / community lists. But from now onwards, this Commission can now effectively work towards the welfare and upliftment of people who come from socially and educationally backward classes. This Commission will also discharge other functions related to the protection, welfare and development of backward classes and empower them by utilizing the inherent powers of Articles 16-4 and 15-4 under the Constitution. The BJP has always been committed towards building a society where everyone has equal opportunities and nobody is treated inferior. This step reflects the strong resolve of our Prime Minister Shri Narendra Modi to bring equality in the society where nobody is treated badly because of his / her caste or educational backwardness. Justice needs to be delivered to every citizen without any bias or prejudice.

The anti-backward behavior of Congress and Other Regional Parties: Today, when the BJP government led by Hon’ble Prime Minister Shri Narendra Modi has taken this step to bring in equality in the society, the Congress and other regional parties are disappointed and their frustration is so obvious. These parties have always suppressed the interests of the backward classes of the society and only gave them false hopes.The way Congress has opposed the move in the Rajya Sabha shows their real attitude towards backward classes.

It is evident that despite being in power for so long, the Congress Party did not initiate any concrete step towards fulfilling interests of backward classes. Now when the BJP has got the mandate to rule the country, the Bharatiya Janata Party government has achieved the goals by handling these issues on priority. It is perhaps for these reasons, the Congress Party is disappointed and feeling frustrated. Despite the suggestions of Kaka Kalelkar Commission (1950) and Mandal Commission (1979), the respective Congress governments did not take any action in this direction.It is known that the OBC Parliamentary Committee made a recommendation in this regard and the Members of Parliament from all parties had personally requested the Hon’ble Prime Minister Mr. Narendra Modi to amend the Constitution in this regard. Considering these suggestions, the BJP-led Government took strong steps and was successful in bringing consensus on the issue in the LokSabha. But this is unfortunate that the move to empower people of the backward classes and making them independent has been opposed by some political parties in the Rajya Sabha. Opposing ideas is a part of politics and there are allegations and counter allegations too, but to oppose a decision aimed at improving the living conditions of backward people cannot be termed right. People who have been sidelined for long should now get their due in the society. It is not right to oppose such decision only for politics.

While Congress kept opposing the move, the leaders of various political parties under NDA and the chief ministers of BJP ruled states led-by Shri Amit Shah thanked the Honorable Prime Minister Shri Narendra Modi for taking this step. This issue is directly linked with the interests of backward classes, so it needs to be supported by every single political party. But the Congress is not supporting it. The BJP criticizes this move of the Congress. The Bharatiya Janata Party calls upon all party workers and every social institution to make people aware of the historic step and ensure equal opportunities to the people of backward classes. It is a noble step taken by Honorable Prime Minister Shri Narendra Modi towards creating an equal society. It is the duty of every leader of the party to reach this message in the remote parts of the country so that justice can be delivered in far-flung areas. Party workers under the leadership of Hon’ble Prime Minister Shri Narendra Modi should take a pledge and make efforts towards making backwards aware about their constitutional and legal rights. The Bharatiya Janata Party congratulates and appreciates honorable Prime Minister Shri Narendra Modi on taking this historic step to award the Constitutional status to National Commission for socially and Educationally Backward Classes.