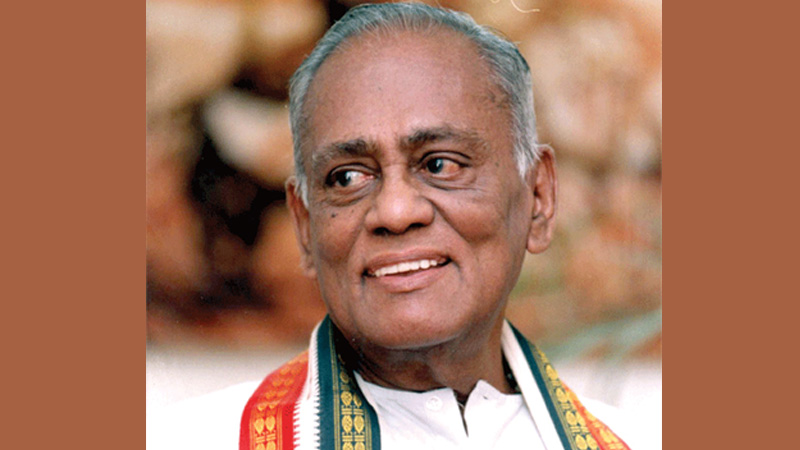 Shri K. Jana Krishnamurthi was a renowned political leader who adorned the office of BJP National President between 2001 to 2002. Shri Krishnamurthi, a former Union Law Minister and member of the Indian Parliament, was the second person from Tamil Nadu to lead a national party after Kamaraj.

Shri Krishnamurthi was born on 24th May ,1928 in Madurai, Tamil Nadu. In 1965, he left his successful law practise in Madurai after graduating from Chennai Law College. Shri Guruji, then-Sarsangh Chalak of the RSS, persuaded him to enter politics.

At the request of Shri LK Advani, he relocated to Delhi in 1993 and established the BJP’s Economic, Defense, and Foreign Affairs Intellectual Cells. He was in charge of the BJP headquarters beginning in 1995. He also served as the Party’s Spokesperson. Krishnamurthi ran for Lok Sabha from South Chennai in 1998 and lost by a razor-thin margin

Shri Krishnamurthi joined the RSS in 1940 and became the General Secretary of the Bharatiya Janata Sangh (BJS) in Tamil Nadu at the request of Shri Atal Bihari Vajpayee. He was instrumental in increasing support for the relatively unknown BJS in South India.

He was the secretary of the Tamil Nadu resistance movement when the state of emergency was declared in 1975. When the BJS merged with the Janata Party in 1977, he became General Secretary of the Janata Party’s Tamil Nadu unit. Along with Shri Atal Bihari Vajpayee, Shri Lal Krishna Advani, Shri Sunder Singh Bhandari, Shri Kushabhau Thakre, and Shri Jaganatha Rao Joshi, he co – founded the Bharatiya Janata Party (BJP) in 1980. He was the organization’s first National Secretary. He became one of the General Secretaries in 1983 and Vice-President of the Party in 1985.

From 1980 to 1990, he was instrumental in the BJP’s expansion in the four southern states of Kerala, Tamil Nadu, Karnataka, and Andhra Pradesh.

At the request of Shri LK Advani, he relocated to Delhi in 1993 and established the BJP’s Economic, Defense, and Foreign Affairs Intellectual Cells. He was in charge of the BJP headquarters beginning in 1995. He also served as the Party’s Spokesperson. Shri Krishnamurthi ran for Lok Sabha from South Chennai in 1998 and lost by a razor-thin margin. On March 14, 2001, he succeeded Shri Bangaru Laxman as President of the BJP. He served as President until June 2002.

Shri Krishnamurthi later served as Union Law Minister in Atal Bihari Vajpayee’s cabinet. He resigned after a year due to ill health. He served as a Rajya Sabha Member of Parliament from Gujarat and was a member of the Parliament’s Standing Committees on External Affairs and Defence. He also served as the Chairman of the Petitions Committee. His tenure will be remembered for his forthright and honest report on Petrol Adulteration. On September 25, 2007, he departed for his heavenly abode.