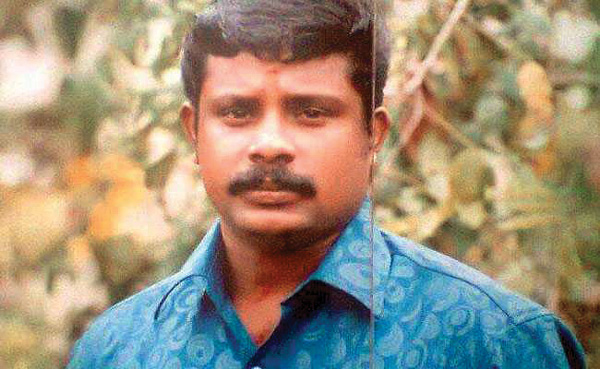 Another RSS-BJP Karyakarta was hacked to death by the CPI-M party cadres in Thiruvananthapuram, Kerala on 29 July, 2017. The victim, identified as Shri Rajesh Edavakode, 34 was killed in Sreekaryam area of the state capital around 8.30 pm in the evening while he was returning from the RSS shakha office.

According to the police, after BJP’s Kerala unit office in Thiruvananthapuram was torched, prohibitory orders have also clamped for three days starting from 28 July, 2017. Noteworthy, on the first day many people, including 4 from the student and youth wings of CPI-M were arrested in connection with the clashes with the RSS-BJP workers in the city.

However, a six-member gang of attackers led by a person who has a long list of crimes on his name chopped off Shri Rajesh’s left hand on the next day of the police prohibitory order. Police said the suspects in the incident had links to the Communist Party of India (Marxist) or CPM.

Shri Rajesh was rushed immediately to a nearby hospital where he later succumbed to his injuries. According to reports, there were over 20 wounds in his body.

Reacting to the cold blooded murder of the party Karyakarta, Kerala BJP President Shri Kumanam Rajasekharan said that the CPI-M was behind the attack. Shri Rajasekharan also added that such violent acts had the tacit support of the Left led state government.

Kerala Governor Shri P Sathasivam on 31 July, 2017 also summoned Chief Minister Pinarayi Vijayan and State Police Chief Loknath Behra to inquire about the murder of a Rashtriya Swayamsevak Sangh member in Thiruvananthapuram and action taken against the lawlessness in the entire state.
Interacting with the media persons after the heinous murder Union Minister Smt. Smriti Irani said that law and order in Kerala had broken down and the CPM-led state government was not taking action against the killing of RSS workers as it was politically beneficial for it.

BJP National General Secretary Shri Bhupender Yadav said no part of the world has been put to such a long march of blood soaked sacrifices as RSS workers are witnessing in Kerala and that too, only for the reason that they chose to side with nationalist views. He said in the last 25 years, more than 85 Sangh workers were killed.

Shri Yadav said that Kerala has witnessed large scale violence perpetrated by CPM men, but Kannur stands out for the scale and intensity of violence carried out by the Left party workers with the aid and support of the state government. He said that it seems the even the state police is also acting like CPM cadre and not taking required action against the guilty.

The Bharatiya Janata Party called for a statewide shutdown in Kerala on July 30, 2017 to protest against the killing of a Sangh worker by members of the Communist Party of India (Marxist).

State BJP President Shri Kummanem Rajasekheran, who visited the hospital after the attack said reporters that this was a result of state-sponsored violence. The Karyakarta, died in a private hospital in Thiruvananthapuram after he was brutally attacked. He suffered serious injuries to his face, hands and legs. His left palm was also severed and thrown away.

The CPI-M led government has become a mute witness to the violence going on in the state capital. Even our state party headquarters was attacked. But we exercised restraint. The state government has not even called for a peace talk to resolve issues,” Shri Rajasekheran said.

The total shutdown called by BJP got enormous public support throughout the state.

According to media reports in the last 17 years, 65 RSS-BJP workers, 11 workers of Congress and IUML each have been killed – mostly by CPM in Kerala. However, according to police statistics, for political rivalry 10 RSS-BJP workers have been murdered since February last year. BJP National General Secretary Shri Bhupender Yadav said that in last 17 months more than 17 RSS-BJP workers were killed.

BJP members in the Lok Sabha raised the issue of political killings in Kerala and accused the CPI-M-led Left Front government in the state of inaction.

Raising this issue in the Parliament Bharatiya Janata Party MP Shri Prahlad Joshi said, “In 17 months of Left government in Kerala, 17 people have been killed”.

She said these are few names of those who were victims of political murders in Kerala but the people who give lectures on intolerance and democracy cannot tolerate alternate ideologies in democracy. Politics does not give license to kill,” she added.

Union Minister Shri Arun Jaitley on 06 August, 2017 met family members of slain RSS worker Shri Rajesh, at his house in Sreekaryam near Thiruvananthapuram. During the visit, Shri Jaitley spoke with the three-year old son of Shri Rajesh and his aged parents.

State BJP leaders, including President Shri Kummanam Rajasekharan, accompanied the Union Finance Minister. They informed that law and order situation had collapsed under the LDF government led by Pinarayi Vijayan and backed by state government the CPI(M) activists carried out this gruesome murder.

Shri Jaitley has also visited some of the BJP workers whose houses were attacked allegedly by CPI(M) in recent days.