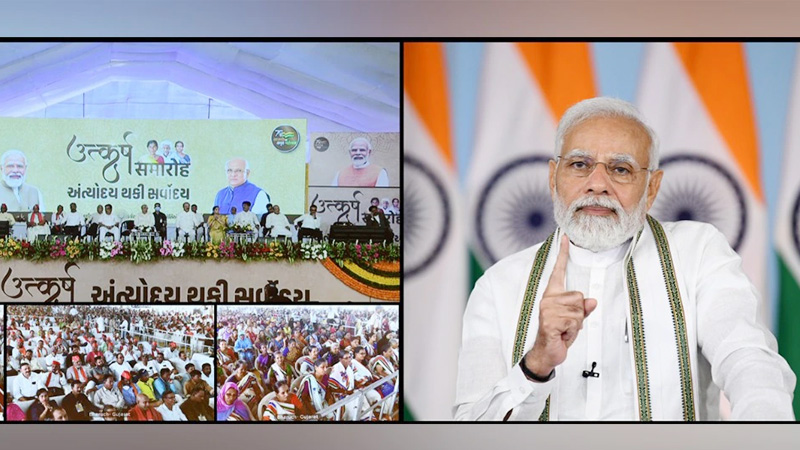 Prime Minister Shri Narendra Modi addressed ‘Utkarsh Samaroh’ in Bharuch, Gujarat via video conferencing on 12 May. The programme marks the celebration of 100% saturation of four key schemes of the state government in the district, which will help provide timely financial assistance to those in need. Chief Minister of Gujarat, Shri Bhupendrabhai Patel was among those present on the occasion.
Women of the region presented a huge Rakhi to the Prime Minister, wishing him health and long life and thanking him for all he has done for the dignity and ease of living of women in the country. The Prime Minister interacted with the beneficiaries of various schemes.

Addressing the gathering, the Prime Minister said that today’s Utkarsh Samaroh is a testimony to the fruitful results achieved when the government sincerely reaches out to the beneficiary with a resolve. He commended the Bharuch district administration and Gujarat government for a 100 percent saturation of 4 schemes related to social security. The Prime Minister noted the satisfaction and confidence among the beneficiaries. He said many citizens from tribal, SC, and minority communities are deprived of the benefits of the schemes due to lack of information. He also noted that the spirit of Sabka Saath Sabka Vishwas and honest intentions invariably give good results.

Noting the upcoming eighth anniversary of the government, the Prime Minister said that eight years of the Government have been devoted to ‘Seva Susashasan aur Garib Kalyan’. He credited the successes of his administration to the experience that he gained as one of the people learning about deprivation, development and poverty. Saying that he works on the basis of personal experience of the poverty and needs of the common people, he said that every entitled person should get the full benefit of the scheme. The Prime Minister said that the soil of Gujarat has taught him not to rest on his laurels and he is always aiming to improve and expand the scope and coverage of the welfare of the citizens. “My dream is saturation. We should move towards 100 per cent coverage. Government machinery should get used to this and a belief should be generated among the citizens.”

The Prime Minister noted that in 2014 almost half of the country’s population was deprived of facilities like toilets, vaccination, electricity connection and bank accounts. Over the years, with everyone’s efforts, we have been able to bring many schemes closer to 100% saturation. After 8 years, exhorted the Prime Minister, we need to rededicate ourselves with renewed determination and resolve.

The Prime Minister said 100% coverage of beneficiaries means delivering to every creed and every section equally with Sabka Saath, Sabka Vikas. No one should be left behind from every scheme for the welfare of the poor. This also finishes the politics of appeasement. Saturation means that the benefit reaches the last person in society.
He thanked the women for giving him strength in the form of the Rakhi that was presented to him by the widow sisters from the region. He said that their wishes are like a shield for him and inspire him to work harder.