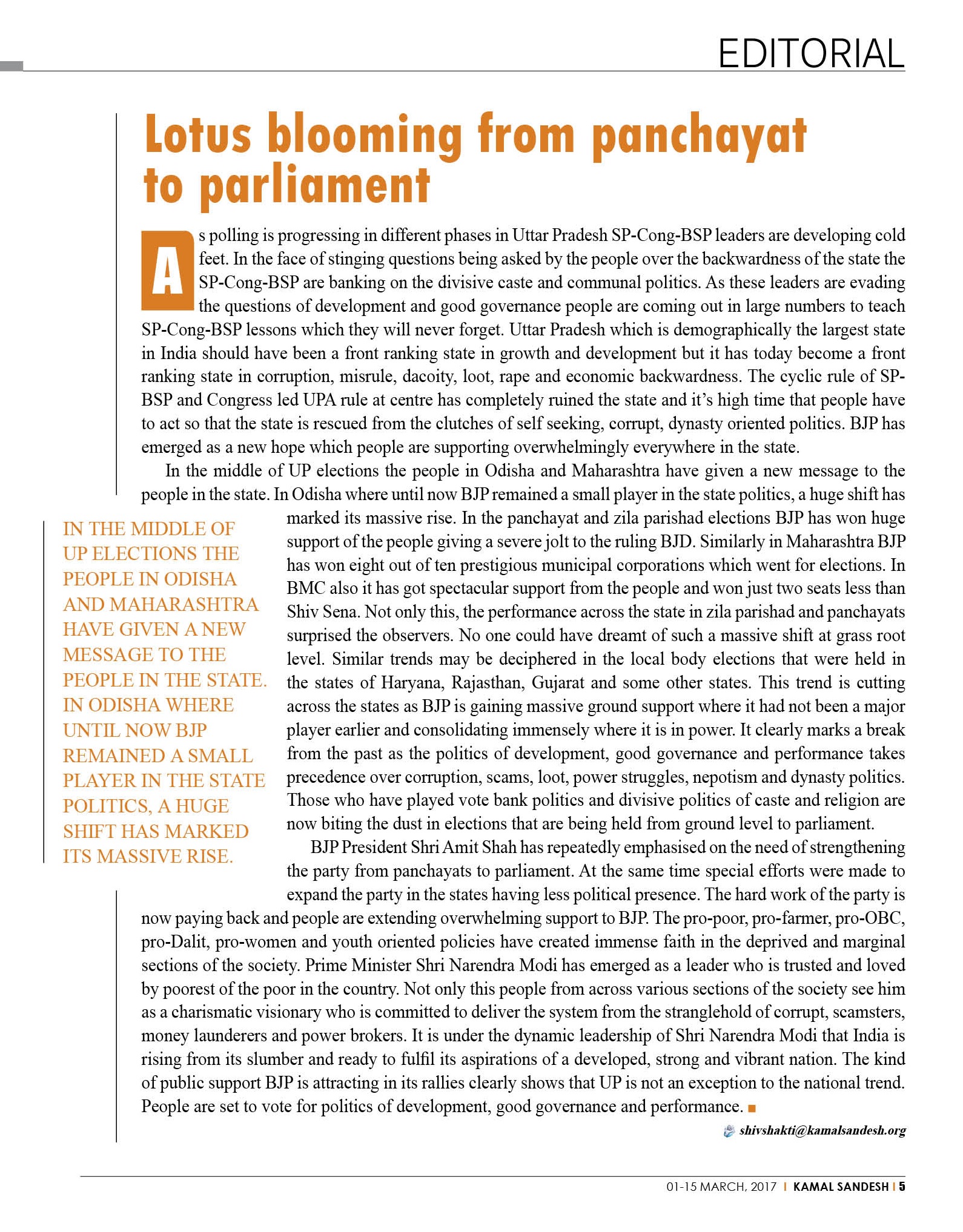 As polling is progressing in different phases in Uttar Pradesh SP-Cong-BSP leaders are developing cold feet. In the face of stinging questions being asked by the people over the backwardness of the state the SP-Cong-BSP are banking on the divisive caste and communal politics. As these leaders are evading the questions of development and good governance people are coming out in large numbers to teach SP-Cong-BSP lessons which they will never forget. Uttar Pradesh which is demographically the largest state in India should have been a front ranking state in growth and development but it has today become a front ranking state in corruption, misrule, dacoity, loot, rape and economic backwardness. The cyclic rule of SP-BSP and Congress led UPA rule at centre has completely ruined the state and it’s high time that people have to act so that the state is rescued from the clutches of self seeking, corrupt, dynasty oriented politics. BJP has emerged as a new hope which people are supporting overwhelmingly everywhere in the state.

In the middle of UP elections the people in Odisha and Maharashtra have given a new message to the people in the state. In Odisha where until now BJP remained a small player in the state politics, a huge shift has marked its massive rise. In the panchayat and zila parishad elections BJP has won huge support of the people giving a severe jolt to the ruling BJD. Similarly in Maharashtra BJP has won eight out of ten prestigious municipal corporations which went for elections. In BMC also it has got spectacular support from the people and won just two seats less than Shiv Sena. Not only this, the performance across the state in zila parishad and panchayats surprised the observers. No one could have dreamt of such a massive shift at grass root level. Similar trends may be deciphered in the local body elections that were held in the states of Haryana, Rajasthan, Gujarat and some other states. This trend is cutting across the states as BJP is gaining massive ground support where it had not been a major player earlier and consolidating immensely where it is in power. It clearly marks a break from the past as the politics of development, good governance and performance takes precedence over corruption, scams, loot, power struggles, nepotism and dynasty politics. Those who have played vote bank politics and divisive politics of caste and religion are now biting the dust in elections that are being held from ground level to parliament.

BJP President Shri Amit Shah has repeatedly emphasised on the need of strengthening the party from panchayats to parliament. At the same time special efforts were made to expand the party in the states having less political presence. The hard work of the party is now paying back and people are extending overwhelming support to BJP. The pro-poor, pro-farmer, pro-OBC, pro-Dalit, pro-women and youth oriented policies have created immense faith in the deprived and marginal sections of the society. Prime Minister Shri Narendra Modi has emerged as a leader who is trusted and loved by poorest of the poor in the country. Not only this people from across various sections of the society see him as a charismatic visionary who is committed to deliver the system from the stranglehold of corrupt, scamsters, money launderers and power brokers. It is under the dynamic leadership of Shri Narendra Modi that India is rising from its slumber and ready to fulfil its aspirations of a developed, strong and vibrant nation. The kind of public support BJP is attracting in its rallies clearly shows that UP is not an exception to the national trend. People are set to vote for politics of development, good governance and performance.