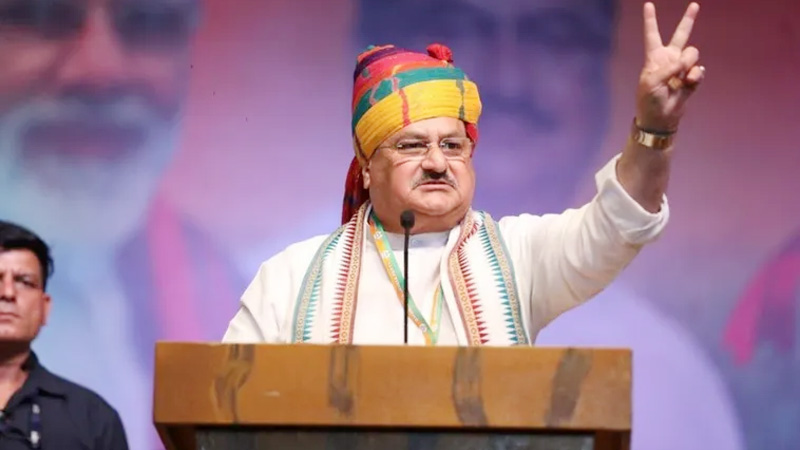 BJP National President Shri JP Nadda visited Telangana on 5th May, 2022 and addressed a massive rally at Mahbubnagar as part of State BJP President Shri Bandi Sanjay’s ongoing Padayatra in the state. Amid ‘Vande Mataram’ chants, Shri JP Nadda was given a grand welcome by senior party leaders and Karyakartas on his arrival in Shamsabad Airport in Hyderabad. After this, BJP National President held a meeting with the state BJP office-bearers in Mahbubnagar and guided the party office-bearers on various topics.

Stating that the people of Telangana are eagerly waiting for a change in the government, the BJP National President vowed to bring in the ‘Double Engine Sarkar’ in the next year’s assembly elections in Telangana.

Addressing a huge rally at Mahbubnagar as part of state BJP President Bandi Sanjay’s statewide Padayatra, which entered 21st day, Shri Nadda said the people of Telangana wanted to see the BJP government in the state after the next elections, which was evident from their response to the Padayatra.

“After seeing the euphoria among the people, I am confident that lotus is going to bloom in Telangana soon,” Shri Nadda said.

Shri JP Nadda said the BJP had shown its strength by wresting the Dubbaka and Huzurabad assembly seats from the ruling Telangana Rashtra Samithi. “It was a big jolt to Chief Minister K Chandrasekhar Rao who has realized that his game is over,” he said.

He said the people were fed up with the corrupt and dynastic rule of KCR. “He has been caught in neck-deep corruption. His government is the most corrupt in the entire country. The Kaleshwaram lift irrigation project on Godavari River has turned into an ATM and a milch cow for KCR,” he said.

Even in schemes like Mission Bhagiratha, the TRS chief had made a big money, Shri Nadda said. “There has been rampant corruption in the programmes like ‘Haritha Haram’ (greenery), land sales etc. The TRS government has been claiming the centrally sponsored schemes as its own,” he added.

PEOPLE SHOWERING THEIR BLESSINGS ON THE PADAYATRA

Stating that the people had been showering their blessings on state BJP President Bandi Sanjay during the Padayatra, Shri JP Nadda said that PM Shri Narendra Modi had always been showing affection towards Telangana. “If the BJP can form the government in Telangana, it would be a double bonanza for the people of the state due to the Double-Engine Sarkar,” he said.

TAKE THE PARTY TO THE GRASSROOTS LEVEL

Earlier, addressing the party State Executive Committee members at Mahbubnagar, the BJP National President Shri Nadda said that the BJP had fair chances of coming to power in Telangana. “All we need to do is to take the party to the grassroots level up to the polling booths,” he said.

The BJP President also asked them to take up district tours and address meetings only after they were fully prepared on the subjects.

Shri Nadda said India has gone from being an importer to a major exporter. “During the pandemic, PM Shri Modi also gave 5 kg rice to the poor. He said the PM always worried about Telangana, so he allotted Rs. 10,000 support price for cotton to cotton farmers and giving special emphasis for the development of the state, he added.