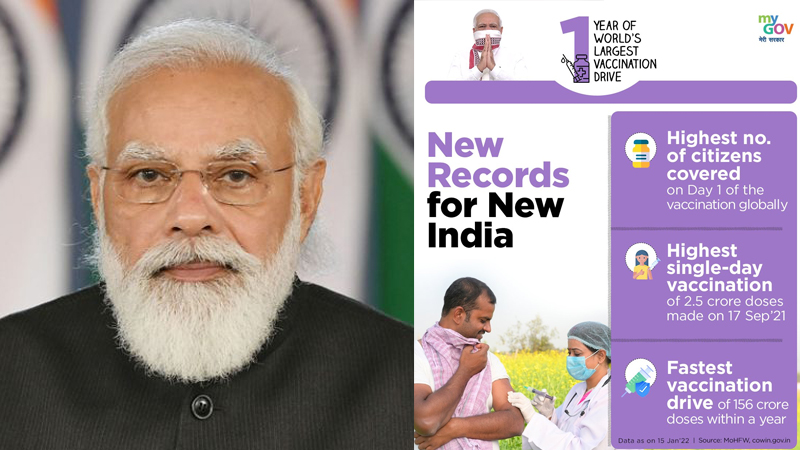 Addressing the gathering, the Prime Minister said the strength of the people of Uttarakhand will make this decade the decade of Uttarakhand. Modern infrastructure growing in Uttarakhand, Char Dham project, new rail routes being built, will make this decade the decade of Uttarakhand. He also referred to strides made by Uttrakhand in the fields of hydro power, Industry, tourism, natural agriculture and connectivity that will make this decade the decade of Uttrakhand.
Shri Modi distinguished the stream of thought that kept the hilly regions away from development from the stream of thought that works relentlessly for the development of the hilly areas. He said in the absence of development and facilities, many migrated to other places from the region. He said that the government is working with the spirit of Sabka Saath Sabka Vikas. He also said that during the last seven year through Har Ghar Jal, toilets, Ujjwala scheme, PMAY, the lives of women are getting new facilities and dignity.

Shri Modi said delay in government schemes has been a permanent trademark of those who were in the government before. “The Lakhwar project, which has started here in Uttarakhand today, has the same history. The project was first thought of in 1976. Today, after 46 years, our government has laid the foundation stone for its work. This delay is nothing short of a crime”, he said.

The Prime Minister said the government engaged in a mission from Gangotri to Gangasagar. With the construction of toilets, better sewerage system and modern water treatment facilities, the number of dirty drains falling into the Ganges is reducing rapidly. Similarly, Nainital Jheel is also being attended to. The Prime Minister said the Central Government has also set up India’s largest optical telescope at Devasthal in Nainital. This has not only given a new facility to the scientists of the country and abroad, this area has got a new identity. He said today, in Delhi and Dehradun governments are not driven by desire for power but by the spirit of service.

The Prime Minister lamented the fact that despite being a border state many defence-related needs were ignored . Along with connectivity, every aspect of national security was ignored. He said that soldiers had to wait for connectivity, essential armour, ammunition and arms and even for giving befitting reply to invaders and terrorist.

The Prime Minister remarked that Uttarakhand wants to accelerate the pace of development. He said “Your dreams are our resolutions; Your desire is our inspiration; and it is our responsibility to fulfil your every need.”. He said the resolve of the people of Uttrakhand will make this decade a decade of Uttarakhand.