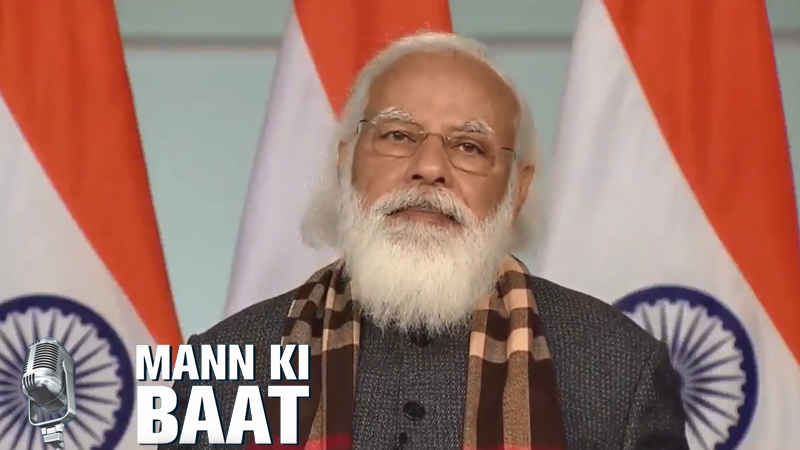 Bhim Upi has become a part of our economy and habit with transactions taking place in semi urban and rural areas : PM

Addressing his 88th edition of monthly radio programme, ‘Mann Ki Baat’ Prime Minister Shri Narendra said that he received most of the letters about the newly inaugurated Pradhan Mantri Sangrahalaya or the Prime Ministers’ Museum adding that the museum honours the contribution of all former Prime Ministers of the country towards the nation-building .

On this 14th April, the birth anniversary of Babasaheb Ambedkar, the Pradhanmantri Sangrahalaya was dedicated to the nation. It has been opened for the citizens of the country. One such listener is Shrimaan Sarthak ji; Sarthak ji lives in Gurugram and has visited the Pradhanmantri Sangrahalaya at the very first opportunity. The message that Sarthak ji has written to me on Namo App is very interesting. He has written that for years he has been watching news channels, reading newspapers, along with being connected to social media, so he used to think that his general knowledge was good enough… but, when he visited the PM Museum, he was very surprised, he realized that he did not know much about his country and those who led the country. He has written about certain facets of the PM Museum which heightened his curiosity such as the spinning wheel of Lal Bahadur Shastri, gifted to him by his in-laws, that made Sarthak ji happy. He also saw Shastri ji’s passbook noticing how little savings he had. Sarthak ji has written that he did not even know that Morarji Bhai Desai was Deputy Collector in Gujarat before joining the freedom struggle.

It is a matter of pride that Azadi Ka Amrit Mohaotsav taking shape of mass movement. PM Museum is becoming centre of attraction among youths and people are taking a lot of interest in our country’s history,”

He had a long career in the administrative service. On Chaudhary Charan Singh ji, Sarthak ji writes that he was unaware of Chaudhary Charan Singh ji’s great contribution in the field of zamindari abolition. Not just that, he further writes he saw that Mr. P.V. Narasimha Rao ji took a very keen interest in the work of Land Reform. Sarthak ji also came to know only after coming to this museum that Chandrashekhar ji had undertaken the historic Bharat Yatra, walking more than 4 thousand kilometers. In the museum, when he saw the items that Atalji used, listened to his speeches, he was filled with pride. Sarthak ji also mentioned that this museum also provides very interesting information about Mahatma Gandhi, Sardar Patel, Dr. Ambedkar, Jai Prakash Narayan and our first Prime Minister Pandit Jawaharlal Nehru.”

“It is a matter of pride that Azadi Ka Amrit Mohaotsav taking shape of mass movement. PM Museum is becoming centre of attraction among youths and people are taking a lot of interest in our country’s history,” he added. The Prime Minister also asked citizens to visit any musuem near them and share their experience with #MuseumMemories.

Further PM Shri Modi, illustrated example of two Sagarika and Preksha from Delhi, who went on a ‘cashless dayout’ and promoted cashless transaction. “Cashless payments are now not limited only to just metropolitan cities like Delhi but in far flung areas of the country like remote areas of North East” adding that “UPI payment facility is available in areas where even internet facilites were not adequate.”
“BHIM UPI has become a part of our economy and habit with transactions taking place in semi urban and rural areas. DIgital economy is creating a new culture, attracting more and more customers. At present, daily transaction of Rupees 20 thousand crore is happening whereas in the month of March it was Rupees10 lakh crore rupees,” he added.

Prime Minister Shri Modi noted how technology has helped visually impaired people and gave expamle of participants of the 2021 Tokyo Paralympics. “Efforts to create resources and infrastructure for visually impaired is in progress in our country.”
As mercury is soaring in most parts of the country, PM Shri Modi encouraged water conservation. He announced making 75 ‘Amrit Sarovar’ in every district in the country for water conservation. “In the 75th year of independence, in the Azadi Ka Amrit Mahotsav, water conservation is one of the resolves with which the country is moving forward. During the Amrit Mahotsav, 75 Amrit Sarovars will be built in every district of the country,” he said.

The PM talked about the fear that students generally have with the subject of Mathematics saying that many students had told him about this during ‘Pariksha Pe Charcha’. He said rather, we Indians should be confident of the subject as most of the contributions and research has been done by Indians. “We expressed infinite and also discovered zero,” he highlighted.

“Mathematics has never been a difficult subject for Indians, a big reason for this is our Vedic Mathematics. The most important thing about Vedic Mathematics is that through it you can do even the most difficult calculations in your mind in the blink of an eye,” he said.