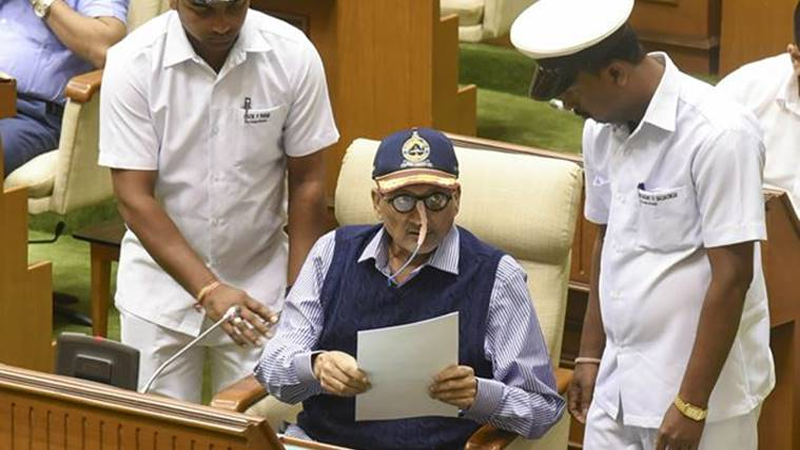 ‘Manohar believed in pro-active but clean politics. He was among the most selfless politicians I have known, always ready to do what the party asked him. He truly epitomised our party’s spirit of Nation First, Party Second, Self last.’

My last meeting with my friend Manohar Parrikar was on January 27. He stunned everyone when he travelled from the makeshift medical facility at his residence to join me for the inauguration of the third bridge on the Mandovi river in Goa. Manohar Parrikar told me that he could not miss the historic event, and thanked me for helping Goa achieve speedy and all-round development.

As I sat next to him, I couldn’t but feel emotionally choked. His voice was extremely feeble and he had a feeder tube inserted in one of his nostrils. Yet, his discomfort was not visible. What was visible was the indomitable “josh” to serve the people of Goa till his last breath, as he put it. Three days later, on January 30, Manohar presented the budget in the Goa Assembly in the same condition, addressing the House for nearly two hours. On February 4, he tweeted a brave message to the world: “Human mind can overcome any disease.”

As I think of all the moments I have spent with Manohar Parrikar, I can only say that apart from his impeccable integrity, dedication and hard work, he has also emerged as an iconic inspiration for cancer patients. He has shown the world that a terminal illness cannot drain your commitment to the country.

Manohar was my contemporary in public life. My association with him dates back to about 35 years ago. Both of us were inspired by the ideology of the RSS, its discipline and the sense of commitment it invoked in us towards nation-building.
A brilliant student who did BTech from IIT Bombay, he entered Goan politics at the instance of the RSS to stall the growing influence of the regional parties in the state. He made his debut in the state assembly in 1994 from the Panaji constituency on the BJP ticket and went on to leave an indelible mark, not only on state politics but also at the Centre as the country’s defence minister.

Parrikar’s tenure as defence minister was historic in many ways. The One Rank One Pension scheme was implemented, the Rafale deal was finalised and India carried out successful surgical strikes in PoK in response to the Uri attack. However, in his personal life, Manohar remained an epitome of simplicity and frugal living. Till a few years ago, he would sometimes drive a scooter to office even after becoming CM. As the defence minister, he often travelled in the economy class of low cost airlines. His needs were minimal. His focus was always on the larger picture.

Manohar believed in pro-active but clean politics. He was among the most selfless politicians I have known, always ready to do what the party asked him. He truly epitomised our party’s spirit of Nation First, Party Second, Self last. In October 2000, Manohar staged an internal coup against a coalition government led by the Congress in Goa without indulging in any kind of horse trading.

Having been the CM of Goa four times, Parrikar has made a pivotal contribution in expediting infrastructure projects and minimising corruption. When I was the BJP president, I would constantly look up to him for new ideas and initiatives to spruce up our good governance agenda.

Manohar quit as defence minister and returned to Goa as CM in March 2017, when we managed to woo parties such as the Goa Forward Party and MGP to support him to form the government. Since I was the overseeing the elections for my party, I have interesting memories of our working together to outsmart the Congress.

However, since February 2018, Manohar had been fighting an arduous battle with cancer. Pancreatic cancer has a low survival rate but looking at Manohar’s zest and energy through this battle, we were hopeful that he will pull off the biggest coup of his life.

But God had other plans. As I recall my association with Manohar, let me make another important point — in my knowledge never before has a leader from a state as small as Goa enjoyed a pan India acceptance and popularity. The reason is simple: Manohar was your next door CM, the kind of relative or uncle you could identify with or relate to, whether you met him at a government office or the vegetable market.

Prime Minister Narendra Modi has aptly described Manohar as the builder of modern Goa. Manohar’s death is a loss for every Goan and every Indian. For me, the loss is deeply personal.

(The writer is the Union Minister for Road Transport and Highways, Shipping and Water Resources, River Development and Ganga Rejuvenation, GoI)