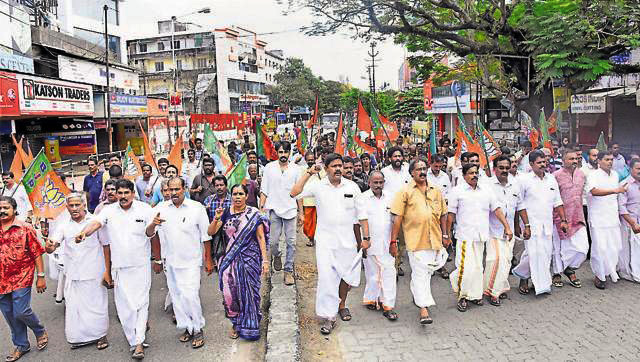 The day-long statewide hartal called by Kerala BJP in protest against the murder of a party activist in Pinarayi, Kannur on 13 October, 2016 was total in the State. BJP activists have taken out a march to the State Secretariat in the morning. Overall the hartal was by and large peaceful in the state.

During the hartal BJP activists blocked roads in various parts of the state. Barring ambulances and person in emergency, all modes of public transport, including the State Road Transport Corporation buses from Kerala and Karnataka, kept off the road. Inter-State trucks plying on National Highway 66 suspended their services spontaneously at the northern Manjeshwaram border check-post till 6 p.m., the police said adding that no major untoward incident was reported from any part of the state.

Banks and other business houses, including shops, downed their shutters of their own in support of the bandh. Offices registered thin attendance. BJP leaders termed the hartal a befitting reply to the CPI(M)’s “politics of violence.”

Noteworthy, BJP activist Shri Remith was hacked to death in the home town of Kerala Chief Minister Pinarayi Vijayan in Kannur district by a gang of CPI(M) workers.

Noting that it was the seventh politically motivated murder in the district this year, BJP National Secretary Shri Siddharth Nath Singh told media persons, “The CPM or the Left ideology has been violent and if you don’t stand with their ideology, they would like to differ with you by silencing you through murder, and that’s what is exactly happening in Kerala,” Shri Singh said.

The murder of Remith, a BJP activist and RSS loyalist hailing from Pinarayi in Kannur, should be seen as a ploy to “divert” the attention of CPI(M) cadres over the controversial appointment of close relatives of party leaders in top posts in select public sector units, BJP leader Shri Sreekanth said addressing a public meeting as part of the BJP protest march.

Stating that the RSS loyalist’s murder was hatched by the top leadership of the Left party, he said Chief Minister Pinarayi Vijayan’s attitude was an insult to the people of Kerala.

The remarks by a senior police officer in Kannur that the force was helpless in safeguarding the life and property of the people was a confession of breakdown in law and order situation, he said.
BJP spokesperson Shri GVL Narsimha Rao accused the Kerala Chief Minister of patronizing criminals. “One can clearly make out that this is political terrorism unleashed by goons of the LDF with the blessings and support of chief minister Pinarayi Vijayan. When the Chief Minister’s patronage is available to criminals, you can see the mayhem they can unleash,” he said here.

Shri Rao said the ruling UDF led by the Communist Party of India-Marxist was unleashing terror on its political rivals as it was unnerved by the rise of the Bharatiya Janata Party in the state.

“Unnerved by the BJP’s rise as well as to divert attention from the corruption in Kerala, these attacks are being orchestrated,” he said.
“The state government has not only failed to preserve law and order but actively participated to wreck it. We demand the LDF government and the chief minister to immediately hand over the murder probe to the CBI,” the BJP spokesperson said.

Meanwhile, after the hartal police have registered cases against 10 CPI(M) workers in connection with the attack on Remith. A special squad has been formed to investigate the case. However, the BJP has demanded a CBI probe into the murder by CPM members.