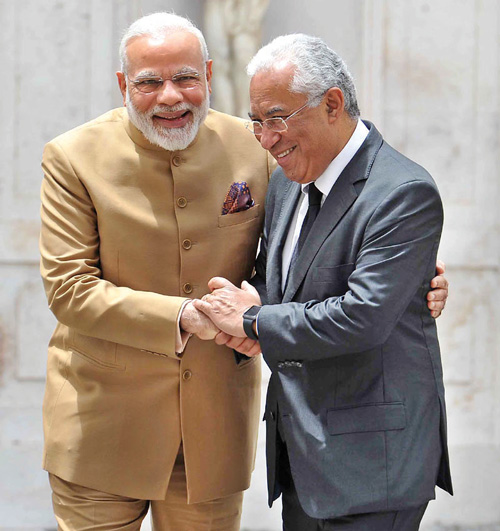 Shri Narendra Modi from June 24 to June 27 made successful foreign visit to Purtagal, US and Netherlands. During the visit bilateral relations touched new heights. He interacted with leaders,CEOs of the countries and also addressed people of Indian origin.

During the visit of Prime Minister Narendra Modi to Lisbon, the two sides signed MoUs for creation of an India Portugal Space Alliance and for advancing collaborative research. These agreements will promote India’s science and technology partnership with Portugal, towards the establishment of a unique Centre on the Azores Archipelago – the Atlantic International Research Centre.

This Centre will act as a research, innovation and knowledge hub for trans-atlantic and north-south cooperation. An international network of research and academic organizations will be created. The goal is to provide a shared environment to support research and foster new climate, earth, space and marine research.

With respect to space, cooperation is expected to include development and cooperation of next generation nano and micro satellites. On marine sciences, the project would enable India to study the atmospheric and ocean behaviour of the Atlantic and its linkages with weather patterns including the Monsoon.

During his historic visit Prime Minister Narendra Modi met the Indian community in Lisbon, and interacted with them. During his address, Shri Modi highlighted several aspects of the India-Portugal partnership.

Shri Modi highlighted his meeting with António Guterres, who was also the former Prime Minister of Portugal. The Prime Minister spoke about yoga and holistic healthcare and appreciated the role Portugal was playing to further the message of yoga.

Prime Minister Modi said that India is now among the fastest growing countries in the world. Lauding the role of ISRO scientists, Shri Modi said, “In the field of space, our scientists have done great work. Recently 30 nano satellites were launched.”

Earlier he also expressed sadness over loss of lives in forest fire in Portugal. 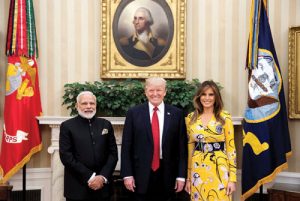 He said that the Indian diaspora rejoiced whenever there was good news from India, and wanted India to scale newer heights. He appreciated the role played by the diaspora in contributing towards the American economy. The Prime Minister said that people in India are now getting opportunities and the right environment. He expressed confidence that soon, they would transform the country.

The Prime Minister asserted that in the last three years, there has not been a single allegation of corruption on the Union Government.
The Prime Minister spoke of the role of technology in reducing corruption. Elaborating on the benefits of Direct Benefit Transfer, he said this has helped in better targeting of subsidy and eliminated leakage to a large degree. The Prime Minister complimented families which have given up their LPG subsidy. He laid out the vision of providing LPG connections to 5 crore poor households. “When I think of a developed India, I think of a healthy India, particularly the good health of the women and children of our nation”, he added.

The Prime Minister said that through technology-driven governance, a modern India is being created. He said that when appropriate policies and governance are in place, the aspirations of the people of India can be achieved. 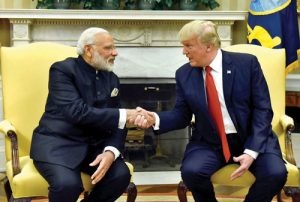 The Prime Minister also appreciated the role of the Ministry of External Affairs, and in particular, the External Affairs Minister Smt. Sushma Swaraj, in helping people in distress, across the world.

Earlier he also met and interacted with 20 top American CEOs at a roundtable meeting in Washington DC. He said, he said if America becomes stronger, India will be a natural beneficiary. He also added that India believes that a strong America is good for the world. He sought enhanced attention from the CEOs in areas such as women empowerment, renewable energy, startups and innovation. He suggested linking sanitary practices, products and technologies with the requirements of school going girls. He reiterated that his primary interest is improving the quality of life in India. 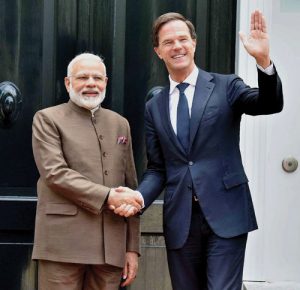 Describing the Netherlands as India’s “natural partner” in its economic development, Prime Minister Narendra Modi on Tuesday said the bilateral ties with the country’s major trading partner will grow rapidly.

After the bilateral talks between Prime Minister Modi and his Dutch counterpart Mark Rutte, the two countries signed three MoUs in the fields of social security, water cooperation and cultural cooperation.

During the talks, the two leaders reaffirmed their commitment to climate change accord and strengthen cooperation in developing renewable energy.
Ahead of the talks, Mr. Modi who is here on the final leg of his three-nation tour thanked the key European nation for backing India’s Missile Technology Control Regime (MTCR) membership.

“Because of your support India got the membership of the MTCR,” Mr. Modi said.

“Ties between India and the Netherlands are very old. Our bilateral relations are very strong,” he said.

He said that relations between India and the Netherlands are century old and the two countries will keep on moving towards stronger ties.
Mr. Modi said the Netherlands is the 5th largest investment partner globally and in the last three years it has emerged as the third largest source of FDI for the country.

In the joint address, Dutch Prime Minister Rutte said India’s emergence as a global power is a “welcome development from both political and economic point of views.”

“Political because of the values we share with respect of rule of laws and security,” he said.

He commended India for its commitment to renewal energy and to the Paris climate agreement. He praised Mr. Modi for announcing major sustainable initiatives like ‘Clean India’ and ‘Make in India’. “The Netherlands is a key partner to help India achieve its goals. India is now a global economic power. It is world’s second biggest economy and Indian market has a lot of potential. We have a plenty to offer to India too,” he said.
He said Europe is India’s biggest trading partner and 20 per cent of India’s export to Europe enters through the Netherlands. “So, for India, we are an entry (point) to Europe,” he said.

The Dutch premier said the ties is only expected to grow in coming years.

“Today we are giving fresh impetus to ties by easing the flow of capital in both directions. I believe this is one of the many ways to boost ties in the next 70 years and beyond,” he said.

This year, the two countries are celebrating 70 years of the establishment of Indo-Dutch diplomatic relations. Mr. Modi, during his day-long visit, will also call on King Willem-Alexander and meet Queen Maxima. He would also be meeting with CEOs of major Dutch companies and encourage them to join the Indian growth story. (PTI)