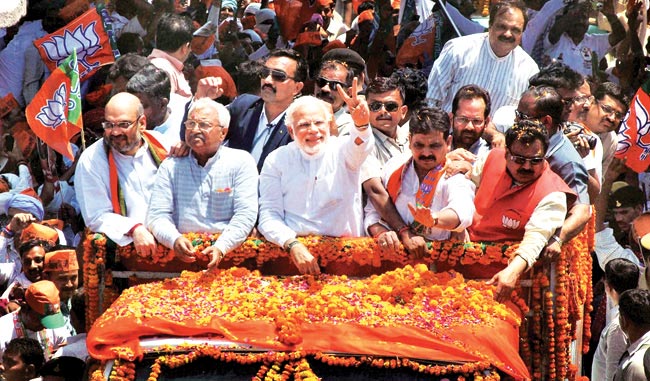 Bharatiya Janata Party has come out with flying colours in the just concluded elections to five State assemblies. Out of the five, BJP ruled in one State (Goa), in Punjab it was an alliance partner, Uttarakhand and Manipur had Congress governments and UP was ruled by Samajwadi Party (SP). The biggest catch is UP followed by Uttarakhand.

Under the magnificent duo of Prime Minister of India Shri Narender Modi and BJP National President Shri Amit Shah, Bharatiya Janata Party has come out with flying colours in the just concluded elections to five State assemblies. Out of the five, BJP ruled in one State (Goa), in Punjab it was an alliance partner, Uttarakhand and Manipur had Congress governments and UP was ruled by Samajwadi Party (SP). The biggest catch is UP followed by Uttarakhand. In Goa and Manipur BJP is going to form its government in alliance with local parties. By count of the States the success may be 80 percent yet in measure the pleasure is hundred percent.

This victory has created history, a revolution that has changed the political scenario in the country. It has stunned into silence BJP opponents who prophesied a Doomsday for the NDA government led by Shri Modi in these elections. BJP detractors had branded the elections as a referendum on demonetisation and what Shri Modi had done or not done during the last about 3 years of his rule. If it was, as they said, the people in these States have given a lie to the false propaganda let loose by these leaders. It only showed how cut off were they from the pulse of the people. The voter has firmly put his seal of approval for Shri Modi’s courageous and historic step.

It is for the first time in the history of independent India that a Prime Minister and his government have maintained their rapport with the people even after about three years in office. BJP has now won almost the same number of assembly constituencies and the same percentage of votes when it recorded win in 73 Lok Sabha seats in UP in May 2014.
In 1980 Congress had won 309 seats in a 425-member undivided UP house. It fell short of three-fourth majority. BJP has smashed this 37 year old record by winning 312 out of 403 seats recording three-fourth majority. BJP alliance partner Apna Dal won 9 seats. Interestingly, the national party Congress which fought the election as an ally of the ruling Samajwadi Party (SP) was squeezed to just 6. In 2012 Congress had won 28 seats fighting against SP and gave the credit squarely to present Congress Vice-President Rahul Gandhi. But this time no one in Congress is willing to give the credit for 6 seats to him despite the fact that he had all alone campaigned tirelessly and extensively alongside Chief Minister Akhilesh Yadav.

The present elections have been very harsh on the dynastic politics. Dynastic campaign by the Congress trio of Mrs. Sonia Gandhi, Rahul Gandhi and his sister Priyanka Gandhi Vadra has received a severe drubbing. All the four constituencies falling in Rahul’s Amethi parliamentary constituency and the two in Mrs. Sonia Gandhi’s Rae Bareli constituency Congress contested were lost to BJP.

The worst has been the Akhilesh clan. None of his family members who contested on SP ticket were elected. His estranged uncle Shivpal Yadav did win.

Prior to the close of campaigning for the last and 7th phase of UP poll, PM campaigned in his parliamentary constituency of Varanasi for three consecutive days but not as PM but its representative. As a common leader he undertook road shows to mix with his constituents caring a fig for his personal security. This paid dividends. BJP won all the eight seats, including one by its ally.

The results have put a question mark on SP’s UP CM Akhilesh Yadav future. Miss Mayawati’s re-election to the Rajya Sabha next year has been doomed.

PM Narendra Modi has emerged as the tallest leader of the country since independence. No leader in the past enjoyed that much clout in so short a time. It is the result of the way Shri Modi has conducted himself in running the affairs of the nation and ushered in all round progress in the country touching and benefitting every section of society, particularly the poor and the neglected sections irrespective of their caste, creed, sex and region.

Shri Modi has lifted the level of his performance and campaigning so high that he has made appeals by certain political parties to caste and community irrelevant. He has earned universal appreciation and support from all. He has now become the doyen of every section’s eye in society. BJP victory in constituencies overwhelmed by certain castes and communities, like Deoband, could not have been possible had the dominant castes and communities not voted for it.

For 2014 Lok Sabha win, PM Modi had described the then BJP national president Rajnath Singh as the captain with Shri Amit Shah as the Man of the (election) Match. This time it was the collective team of Shri Modi and Shri Shah that has worked the wonder of catapulting the BJP to a pan-India party ruling in almost every region of the country.

Prime Minister Modi has hailed Shri Amit Shah as the most successful BJP chief who has turned the party as the largest political organization in the world with a membership of about 11 crores. This was following by winning State after State in successive elections. It is during his stewardship that BJP, for the first time, extended its hold in the States of Uttar Pradesh, Uttarakhand, J&K, Haryana, Maharashtra, Jharkhand, Assam and Manipur. The organizational part of marshalling the party machinery for realizing the objective in view and putting the strategy in operation was looked after by national general secretary organization Shri Ramlal.

In fact, PM Modi and BJP President Amit Shah have now come to be hailed as Jodi No. 1 by the media. Both seem to be made for each other for strengthening the party and ushering in development and good governance in the country.

The people have put breaks on the inflated ego and high aspirations of Delhi CM Kejriwal’s Aam Aadmi Party. His boast to form governments in Punjab and Goa has proved a damp squib. Party failed to open its account in Goa. It contested 39 seats and 38 of its candidates, including the chief ministerial candidate, lost their security deposit.

This election will go down in the electoral history of India as the worst one in which the opposition debased the election campaign to the lowest level bordering on calling names and hitting below the belt. The results have given a befitting reply to the opposition by rejecting their no-holds-barred campaign. Perhaps the opposition will take the results as a lesson.

Irom Sharmila, who made headlines in the country and abroad for her relentless fast for over 16 years demanding withdrawal of Armed Forces (Special Powers) Act (AFSPA), terminated her fast a few months back and decided to enter electoral politics. She waited upon Delhi CM Kejriwal who promised her every help though he fell short of adopting her as AAP candidate. She contested against Manipur CM Ibobi Singh and ended up getting just 90 votes. Perhaps it is a message to anti-AFSPA activists in J&K.

In Manipur, it is for the first time that BJP has been able to form its government in alliance with other partners. In the past it had no representation at all in the assembly. Earlier, BJP formed its own government in Assam. It is already in alliance with the ruling parties in Arunachal and Nagaland. Manipur has extended party’s presence in the north-east. It is expected to go a long way in ushering in an era of development, good governance and justice in the region.

The success of BJP strategy not to project a chief ministerial candidate while going to the elections had paid rich dividends in Haryana, Jharkhand and Maharashtra. It proved a success in the current elections in UP and Uttarakhand too.

Shri Modi has taken the BJP to such a great height that it now looks unstoppable. The future elections in Gujarat and Himachal Pradesh in the last quarter of the current year, in Karnataka early in 2018 and in the later half in Madhya Pradesh, Chhattisgarh, and Rajasthan quite appear to be a foregone conclusion of a big win for BJP.

It is because of this reality that one of the anchors during the ongoing debate on election results put a very cogent question to the panelists: Who is going to challenge Shri Modi and BJP in 2019? Nobody was prepared to hazard a guess.

The results have also given a spurt to BJP’s strength and confidence. It can now have a President of its own choice in July this year when the tenure of the present incumbent Shri Pranab Mukherjee expires.

(The writer is a Delhi based Political analyst)