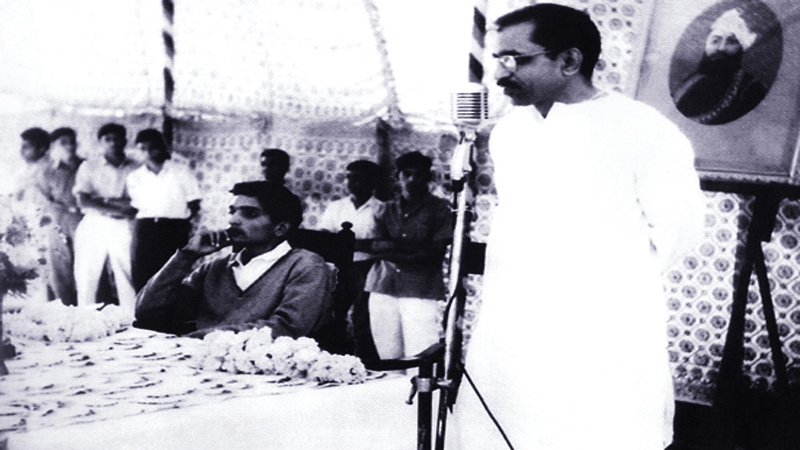 Dr. Mookerjee was honoured as a Minister of the Central Cabinet but he rose much higher in the estimation of the people when he came out of the Cabinet.

Tandon, when he became the President of Indian National Congress, lent a sublime halo to an office which today nobody is prepared to accept. That year there was a keen contest. And Tandonji won making it clear that he commanded a considerable and faithful following in the organisation. But when he relinquished office he gave evidence of his real greatness for he did so without any rancour orally–will. Like a true Karmayogi, without any attachment, he staked his all in the contest, but renounced so eagerly converted prize as if he had nothing to do with it.

There is a great deal of misunderstanding about Tandonji’s espousal of the cause of Hindi, specially amongst the non–Hindi speaking people. They think that Hindi is sought to be enforced throughout the country as a rival to, and ultimately to take the place of regional languages. In fact the issue has been, and is not. Hindi versus regional languages but Hindi versus Hindustani and Indian languages versus English. Those who take up the cause of English mistakenly harbour an idea that English as an all–India language will not harm the growth of regional languages. If English countinues, the days of all the great languages of India are unnumbered.
Whatever the English–maniacs may say, no power can retain English in India so long as the virile and rich languages of Bharat are there.

The day of execution may be delayed but the judgement has been delivered the day when Britishers quit India.

Hindustani A Compromise With Separatism

A language is not simply a vehicle of expression but is also concerned with the life–values of the people who seek to use it. In this respect the national languages of India are so perfect that you can use any one of them without losing your cultural moorings.

And what is Hindustani? It is a language like Esperanto seeking to provide a vehicle of expression not to all the people of India but only to those in the north that has a fairly large vocabulary of Arabic and Persian. Such a language if it can be artificially put up will be as far away from the people as English. To most of the Hindi people and to all the non–Hindi people it will be as unintelligible as Latin and Greek. Moreover, it is a part of the big schemes of deculturising the people of Bharat. If this attempt succeeds in the case of Hindi, it will not leave untouched and untrained other Bharatiya languages, for the basis and content of all of them is the same culture, which is being displaced from the Hindi region. It is a process of annihilation by degrees. Will not the protagonists of composite culture demand that Marathi and Bengali, Kannada and Tamil should also be overburdened with Arabic and Persian words and that they should also like Hindustani be written in two scripts? Tandonji believed in one culture and therefore he took up the cause of Hindi. The cause of Hindi is the cause of all the Indian languages.

Now that these valiant fighters for these noble causes are no more with us, it is our duty to see that the fight does not end. Dr. Syama Prasad Mookerjee had bequeathed us an organisation that can legitimately strive to become a strong and fitting instrument of resisting subversion of our culture and heritage. Unfortunately, Tandonji, fighting as he was from within the Congress, has not left any organised body to take up his cause.

So long as he was there Congressmen could rally around him. But today there is no such central figure.

There only homage to Rajarshi Tandonji can be to see that his services to Hindi and Bharatiya Culture do not go in vain, and now that the other side is resolutely trying to bypass the will of the people, they should organise themselves and in the tradition of Tandonji put up a fearless and successful fight.