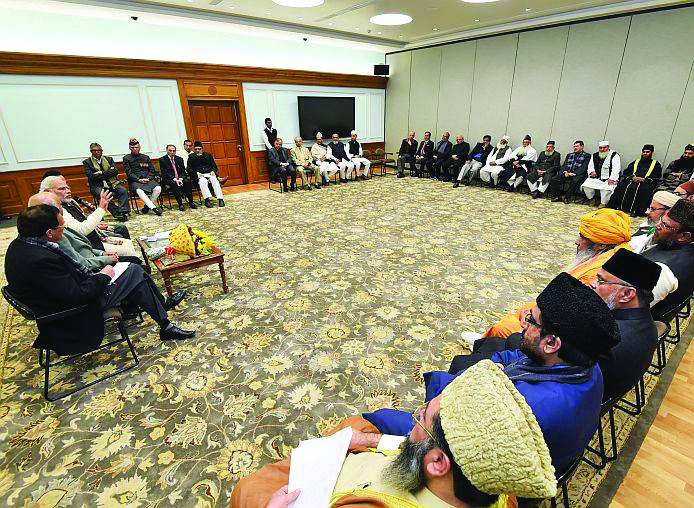 ‘Fight against corruption will benefit the poor and minorities the most’

Prime Minister Shri Narendra Modi on 19 January, 2017 met a delegation of Muslim leaders and conveyed to them that youth in India has successfully resisted radicalization, asserting that the credit for this must go to India’s long and shared heritage. The delegation comprising of Muslim Ulemas, intellectuals, academicians and other eminent people called on the Prime Minister and congratulated him on the steps taken by the Union Government for inclusive growth, socio-economic and educational empowerment of all sections of the society including minorities.
Union Minister of State for Minority Affairs (Independent Charge) and Parliamentary Affairs Mukhtar Abbas Naqvi and Union Minister of State for External Affairs M.J. Akbar were also present on the occasion. The delegation was also appreciative of the Saudi Government’s decision to increase the number of Haj pilgrims from India and thanked the Prime Minister for having successfully pursued the same.
Extending their full supported to the campaign launched by the Prime Minister against corruption and black money, the delegation agreed that the fight against corruption will benefit the poor people including the minorities the most.
Praising the Indian youth in resisting radicalization, Prime Minister Modi conveyed to the leaders that the culture, traditions and social fabric of India will never allow the nefarious designs of the terrorists, or their sponsors, to succeed.
The Prime Minister stressed on the importance of education and skill development, which is the key to gainful employment, and upliftment from poverty.
Appreciating the Government of Saudi Arabia for its decision to increase the number of Haj pilgrims for India, the Prime Minister asserted that there is a positive image of Indian Muslims abroad.