As Prime Minister Shri Narendra Modi completed his 69th year on September 17, the whole nation has celebrated his birthday with commitment to serve the country.
While the Bharatiya Janata Party decided to observe the whole week as Seva Saptah, different states celebrated the occasion in their own unique way.

He also visited his mother Heeraba and took her blessings.

Several exhibitions organised at BJP Headquarters and other places to showcase the social work done by PM Shri Modi. These exhibitions were organised in every district by BJP Karyakartas also displayed the feat of the Central government under PM Shri Modi’s leadership.

Shri Shah, along with Shri JP Nadda, senior party leader Shri Vijay Goel, Shri Vijender Gupta and others swept the floors at the All India Institute of Medical Sciences (AIIMS) in New Delhi as part of the ‘Seva Saptah’ campaign.

The party leaders also visited the patients admitted in the hospital.

After cleaning the floors at the AIIMS, Shri Shah told the media, “BJP workers across the country will begin celebrating ‘Seva Saptah’ from today. Our Prime Minister has dedicated his entire life to serve the nation and has worked for the poor.”

“So, it is appropriate that we celebrate his birthday week as ‘Seva Saptah’.”

Shri Shah also asked the party workers to go among the poor across the country and highlight the works of the Centre.

He added that the BJP has also organised several exhibitions to showcase the social work done by PM Shri Modi.

These exhibitions have also organised in every district by the BJP cadres to display the works of the Centre Government under the leadership of PM Shri Narendra Modi. 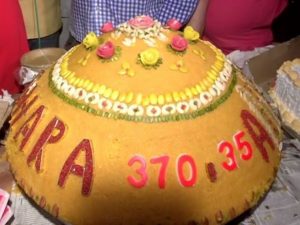 Several Union ministers joined the celebrations, which highlighted the achievements of the Modi government like the Swachh Bharat campaign and the abrogation of special provisions of Article 370.

The celebrations for PM Shri Modi’s birthday began at midnight with Delhi BJP president Shri Manoj Tiwari and the party’s Yuva Morcha activists cutting a cake at the India Gate.